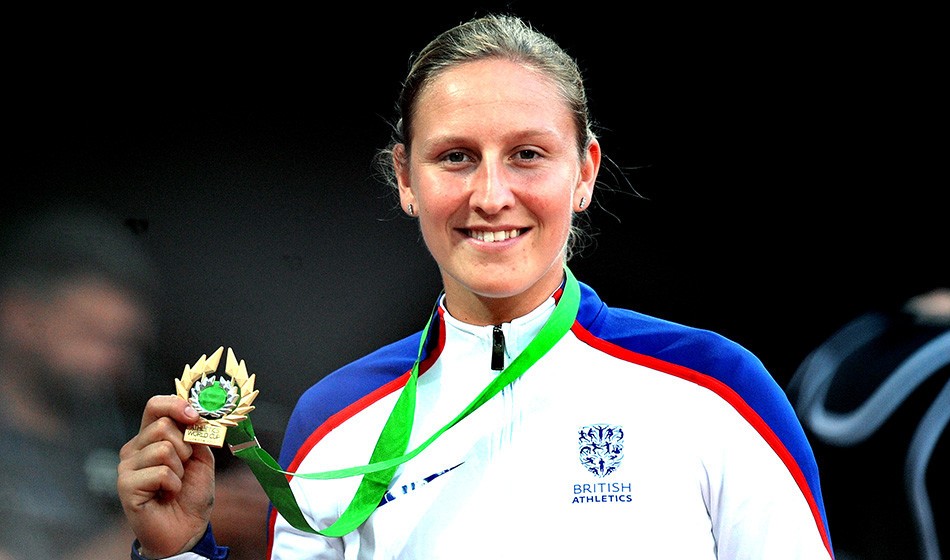 Athletes often have to overcome numerous setbacks in their careers, whether they be injuries or loss of form. European bronze medal-winning pole vaulter and two-time Olympian Holly Bradshaw and sports psychologist Damian Keil of Manchester Metropolitan University take a look at the process of coping with adversity. Is it really a case of what doesn’t break you makes you stronger?

It’s safe to say I am a better athlete now, than I was six years ago. This isn’t an unusual statement and in fact any athlete should really experience the same thing. Consistent progression is what athletes strive for.

However, since 2012 I have sustained four major injuries and setbacks, which have forced me to take long periods out of the sport. Over the last six years I have missed major championships and my performance progression has slowed due to months of little training.

Yet because of this I am so much stronger psychologically and physically, my pole vault technique is so much better and I feel like I have developed in many different ways as a person.

This curious scenario gave me the idea for my university dissertation project. As part of my sport science distance learning degree with Manchester Metropolitan University, I have been able to study this area in greater depth and discover whether other elite athletes experience similar setbacks, yet develop into better athletes and people. This article is a summary of that project.

Adversity has been defined in multiple ways across the research literature. However, for our particular piece of research, adversity was defined as:

Someone experiencing negative events (trauma, misfortune, distress, tragic events), which result in an individual having to experience adjustment difficulties in their life (1).

What happens to a person following adversity, frequently known as adversarial growth, has become a popular line of investigation. Within wider psychology literature positive changes have been reported when individuals experience demanding situations.

Few research papers have investigated this in elite sport, however, therefore more is needed to understand if and how elite athletes experience this.

Four Olympic athletes were interviewed to see if they encountered adversity and how it affected their sporting life and performance. Before the interview a timeline was completed, where each athlete was asked to plot their highs and lows over a period of their choosing.

The interview questions were directed toward understanding the highlighted adverse experiences and whether a positive or negative impact occurred subsequently. Each interview was audio recorded, transcribed and then analysed in depth.

Confidentiality was of paramount importance, therefore false names were randomly assigned to each of the four athletes – “Lisa”, “Kim”, “Sam” and “Tony”.

Content analysis of the interviews highlighted that every athlete experienced multiple adversities during their sporting careers and, interestingly, all described how they encountered significant adversity during the build-up to the Rio Olympics – injury, poor competition form, leaving their coach or competitive event change.

From the content analysis, multiple themes were generated. These are summarised in figure 1. All four of the athletes explained how they faced various forms of adversity throughout their sporting careers.

As you can imagine, the athletes’ initial responses to experiencing adversity were mostly negative and included feelings of bitterness, dwelling, sadness, frustration, anger, disappointment, confusion, isolation, confidence issues and denial.

However, they revealed how they were able to move on and change their attitude toward a more constructive outlook with the help of various coping strategies.

These included social support from family, friends and coaches, actively adopting a positive outlook, using memories and routines from similar adversity experienced previously, thinking more rationally about the situation and relying on strong behavioural traits, such as determination and adopting an optimistic outlook.

It was clear that all athletes experienced growth following periods of adversity. They all described how they developed in different ways – physically, philosophically, psychologically, behaviourally and emotionally.

One common thread was that the athletes did not regret the adversity they faced. In fact, they were quite positive about it.

Some of the comments made by the athletes included:

Lisa: “I am better off for going through it. In sport and life you have to learn.”

Kim: “Had I not gone through that year there is no way I would have gone on to perform the way I did at the Olympics.”

Tony: “I wouldn’t change anything, I learned a lot from every low.”

Sam: “It had way more of a positive effect, rather than a negative one.”

All four athletes achieved significant performance markers in Rio, even though they described going through some pretty tough times in the months leading up to the Games.

Figure 2 highlights more specifically the ways in which the athletes developed following their times of adversity. 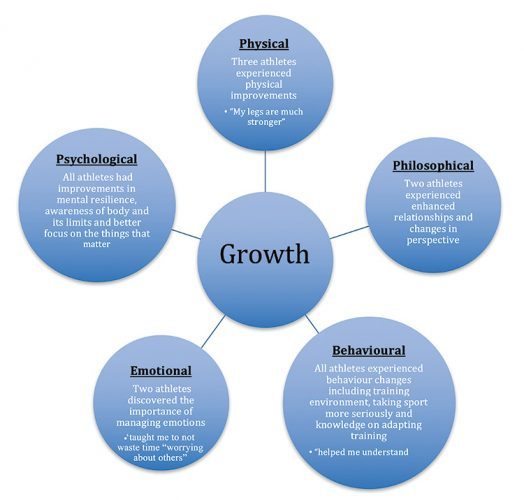 Each athlete was asked what advice they would give to other athletes who may experience setbacks similar to theirs.

Their answers included; listening to your body, keeping confidence/belief and learning from the lows.

Both Tony and Kim described the importance of staying positive. “Have patience and belief that if you have a low then you can easily get back to the top level, take the lows and turn them to positives,” said Tony. “You will always come out the other side and there is no reason you can’t be faster, stronger and fitter than ever before, if you keep the faith,” said Kim.

Kim also recommended making sure you learn from the lows you experience. “Make sensible decisions and learn from them. You can’t continue to do the same thing and expect different results, you have to change something.”

Our research revealed that elite athletes do experience frequent adversity in varying forms as part of a normal journey toward their sporting goals. It was the opinion of the athletes that experiencing these problems and setbacks was crucial for personal and performance improvements. This is something that has been reported in the psychology research realm.

It was very apparent that all athletes had to embark upon a journey (see Figure 3) in order to overcome their adversity.

What is important to remember is that each of the journeys began by experiencing issues that triggered negative responses, such as being “upset”, “frustrated”, “annoyed” and “not confident”.

However, the athletes then implemented strategies (see Figure 3 again) to help them overcome the negativity and accept the situation presented to them. Once they had reached acceptance and acknowledged the situation they faced, they could move forward – with the result that their negative response began to disappear and were replaced by an increased physical commitment and psychological determination toward returning to their sport at a higher level.

Following their setbacks, all the athletes described reaching a higher level of sporting performance, along with multiple other functional improvements.

While adversity is initially perceived as a negative experience, with effective coping strategies athletes can benefit from going through these experiences.

Overcoming adversity is a journey. Athletes must try to acknowledge and accept this – when this journey is embarked upon correctly it can result in personal and performance growth.

A bumpy road is all part of being an athlete – you will have many highs but you will also have many lows. However, the way you deal with the lows is what will ultimately define you as an athlete and determine your success.

From my experience and that of the four participants within this research, adversity is approached in a positive way and as a stepping-stone to bigger and better things.

» This article was first published in the November 15, 2018, edition of AW