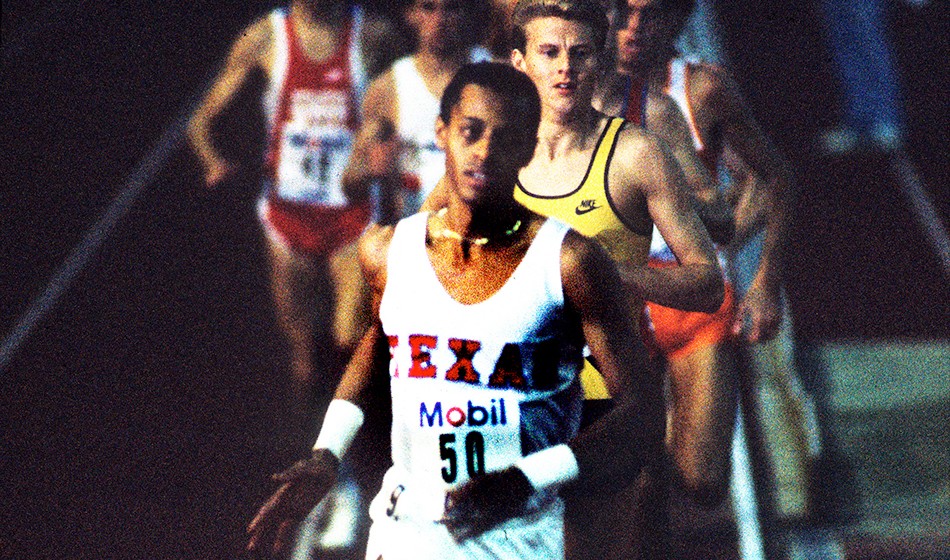 With just one week to go before the inaugural World Championships in Helsinki, some of the sport’s top names are fine-tuning their preparations before jetting off to Finland.

As a bridging distance between 800m and 1500m, the men’s 1000m has attracted an international field of half milers and milers. As they take the bell in a respectable 1:26.58, a familiar face on the European circuit is leading in his distinctive white vest and matching wristbands.

Down the back straight for the last time and BBC Grandstand commentator David Coleman is waxing lyrical about the virtues of “the elegant striding American” out in front. This being said, the man who will go on to record a lifetime best of 1:44.62 over two laps in Stockholm a year later is most certainly a specialist half miler and the rolling of his head as the 800m point fast approaches, signals an impending changing of the guard.

At that moment, Moscow Olympic 800m champion Steve Ovett predictably devastatingly kicks and opens up a gap on the field with Don Paige giving dogged, if eventually futile, chase over the final 200 metres. An unflustered Ovett stops the clock at 2:19.06, saving his customary wave to the crowd until after the finishing line on this occasion.

Further down the field, the battle for the minor places continues as 1976 Olympic 1500m champion John Walker edges past the long-time race leader, whose shoulders have by now joined his head in rotational motion and who will eventually finish in fifth place.

Thirty-seven years later, laughing as he recalls his capitulation over the final furlong, James Mays jokes: “I was left looking like the coyote in an episode of Wile E. Coyote and the Road Runner!” His lay citation to matters of the zoological continue as comparisons to a North American species of canine are soon superseded by reference to a mammal – namely monkeys.

The man who achieved international recognition for his pacemaking work in the 1980s, which famously included guiding Steve Cram to a world mile record in Oslo in the summer of 1985, recalls: “When I was running at Texas Tech, my team-mates coined the phrase ‘Monkey City’. I thought it was funny and a great description of how a runner feels when they’re in the final push of a race.

“The thought of monkeys riding your back with the sound of ‘eek, eek’ in your ear was quite amusing!”

In his moment of jest, the three-time All American collegiate champion may well be speaking words of truth and offering us a few hidden gems in terms of both the psychology and physiology of pain management among athletes.

The psychology of pain management

The sensation of pain occurs as a result of brain neuronal activity in the encephalon. The experience of pain is of course unpleasant but a necessity when one considers its vitality as a signalling function which enables us to ultimately avoid death and maintain homeostasis in biological terms.

The functionality of pain is that it serves as an adaptive function, allowing us as athletes to know when we have encountered our optimal load, be it in the realms of running, jumping or throwing. In disaggregating the notion of ‘pain’, Domzal (1996) spoke about three facets in terms of the somatic (sensual feeling), the cognitive (psychological) and emotional (which is the value judgement we place on pain). This is compatible with the work of Azevedo and Samulski (2003), who noted that while athletes seem to have pain thresholds similar to non-athletes, critically their tolerance to pain may well be higher. So in essence, it’s not what we experience biologically, but how we perceive that experience psychologically.

Pain is subjective and relative which is why the man who now teaches both at school and university level in his native Dallas continues: “Of course there are times when you don’t feel like you’re attacked by monkeys, but actual gorillas!”

What Mays might be referring to would be classified by the likes of Haythornwaite et al (1998) as a specific form of ‘coping strategy’ for pain management. Rather than ignoring ‘Monkey City,’ Mays’ recollections of that Gateshead race challenge us as to whether we should adopt a strategy of ‘Mindfulness’ based upon acceptance that as endurance-based athletes, at some point in our races we will inevitably feel as if we live in such a frightening urban metropolis. This again has some support from the sports psychology literature in that Salwin and Zajac (2016) perceptively point out: “Knowing when to expect the difficulties makes it easier for the competitor to prepare and overcome them … This means that an athlete can, to a certain degree, prepare for pain”.

So rather than running away from pain, we should actually be prepared to hug and embrace it.

While psychologically it clearly helped an athlete like Mays to objectify and externalise his pain as a ‘monkey’, references to ‘Monkey City’ were shared among his collegiate athlete community. This means they must be understood at the sociological level because shared humour is subcultural and it’s learned behaviour.

This is no surprise in that pain is central to our sport. The ability to joke about pain is functional for us athletes and there is of course a plethora of literature around how humour can keep us ‘well’ both psychologically and biologically (See Hassed, 2001). Humour is a necessity, not during a race but certainly when embarking upon the slog of training – it’s a defence mechanism against quitting.

Preparing for the journey to ‘Monkey City’

While psychologically accepting that one will encounter pain, elite level performers like Mays will always attempt to develop physiological strategies to try and deal with the build-up of acid in their blood which is one of the biological drivers of the psychological experience of inhabiting ‘Monkey City’.

In recent years, the esteemed Oregon-based coach Peter Thompson (see www.newintervaltraining.com) has done much good work to further the understanding of what exercise physiologists would term ‘acidosis’. When lactic acid is formed it dissociates into ‘lactate’ and ‘acid’, the latter of which is formed of hydrogen ions. At the point at which the production of hydrogen ion exceeds the body’s ability to buffer and clear because the kidneys and lungs can’t keep the system’s pH in balance, acidosis is said to occur and thus athletes enter the gateways of ‘Monkey City’.

At the appropriate point of the periodisation cycle, intense training simply has to be performed in order to both physically and psychologically prepare both body and mind to cope with the accumulation of high amounts of hydrogen ions, which may be perceived as ‘Monkey City’ in experiential terms.

In previous decades, coach education discourses have incorrectly termed this as ‘lactate tolerance training’. The aforementioned Thompson perceptively points out that a more useful term is in fact ‘acidosis tolerance training’ because lactate itself can be functional for the body.

So how did Mays prepare in terms of the specificity of his own acidosis tolerance training for his visit to ‘Monkey City’?

“The workout that I did which best prepared me to negotiate ‘Monkey City’ was a 600m speed endurance,” he says. “I would run to the 600m mark and then jog 150m through the curve, turn around and jog back to the 200m start. At that point I would blast the final 200m.

“I would do three sets of those and at the end I was totally exhausted but it simulated in the 800m and I felt it prepared me to compete at a higher level.”

The work of the late national coach for middle-distance, Dave Sunderland (2005), would frame this as an ‘event specific’ session. The three golden rules of this mode of session are (1) that each set always adds up to the target race distance; (2) that work is grouped into sets in order to allow sufficient recovery to undertaken work which challenges the lactate energy system; and (3) that second and/or third set repetition lengths tend to be shorter the than first set.

So it should be noted that Mays’ practice of this type of session included a differential element in terms of pacing – namely that the 200m effort would be effected at a greater average pace than that over 600m. Additionally, unlike the doctrine offered by Sunderland (2005), he has undertaken sets of the same length of repetitions. So while Mays has deviated from a ‘textbook’ way of undertaking event specific repetitions, he has done so in a way which serves his own individual developmental needs while remaining faithful to the underlying ethos or ‘spirit’ of this mode of session.

The strengths of using the kind of event specific repetitions utilised by the man who was a regular for Team USA in the 1980s, along with the likes of Johnny Gray and Earl Jones, are that they are invaluable preparation for one’s visit to ‘Monkey City’. The cautionary note is that this mode of session tends to be effected in the competition phase of the periodisation cycle only. This mode of session cannot be performed consistency over several months due to the considerable demands on the lactate energy system and excessive use will risk the kind of fatigue which can lead to both subsequent loss of form and potential injury.

The moral of the story is if you want to deal with the monkey on your back it is well worth having a natter to the man affectionately known as ‘The Rabbit’!

» Matt Long is a former winner of the British Milers’ Club Horwill Award for Coach Education and the author of more than 250 coaching articles. He can be contacted at [email protected] for advice on this piece