Lewis Moses on the benefits of tempo running 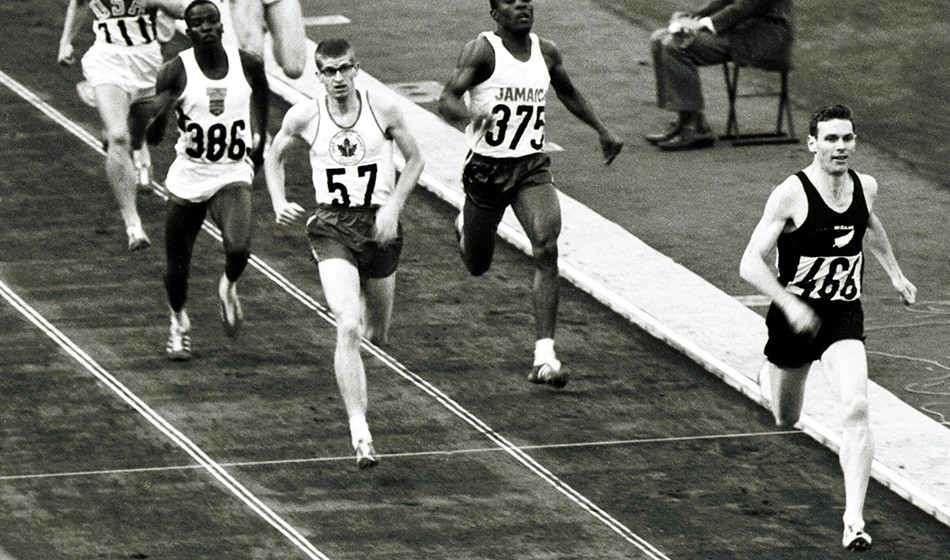 It is summer 1964 and with the Tokyo Olympics still a couple of months away, a New Zealand athlete in his mid-twenties is about to move into a new phase in his periodised training cycle which has been set by his famous coach Arthur Lydiard.

Having spent months on both aerobic base building and hill training, Peter Snell, the reigning Olympic 800m champion, is heading off to the Waikari range in northern Canterbury for a tempo run.

Snell (pictured above, 466) is closing in on one of the most audacious double attempts in Olympic history. Fifty-five years later – and with another Tokyo Olympics on the horizon – coach Lewis Moses joined the Steve Cram Training Camp in Rutland to explain why tempo training can produce such world beating results.

What is tempo running?

“It goes by a number of names – ‘steady state’, ‘LT1’, ‘threshold running’ and ‘lactate running’,” explains Moses. “It’s the one area athletes fall down on because either they don’t understand it or are not comfortable unless they are running flat out.”

In physiological terms, a tempo run is conducted at the level at which the body has the ability to clear as much lactate as it produces – it’s basically the fastest pace at which you can run aerobically.

When further explaining the continuous nature of this mode of running Moses, who during his career ran for Britain at the World Indoors in 2012, adds: “It involves a prolonged duration of activity at 80-85% of your maximum effort.”

What are the benefits of tempo running?

When the body metabolises glucose, lactic acid as a by-product is produced. A tempo run increases lactate threshold, which to further explain is in essence the point at which lactic acid begins to build up significantly in muscles. In simple terms this will help you to run faster for longer – which is why Moses believes “tempo running should be a staple part of the running ‘diet’ throughout the year.”

How to run at tempo

Moses asserts: “I believe in tempo effort not tempo race. My athletes have a stopwatch but I encourage them to work to their tempo through ‘feel’ as well as heart rate.”

This can be assessed on a Borg scale or by using the “talk test”. However, as well as using this qualitative approach, quantitative feedback – such as heart rate monitoring – can also be used. Moses points to the work of esteemed running coach Jack Daniels, who has referenced tempo running as something which is “comfortably hard”.

Kevin Beck, coach and running expert offers the analogy that tempo is akin to, “holding your hand just above the flame”. It’s fast, but not super fast.

How often should you do tempo?

Moses is keen to stress that while a parkrun over 5km can be used too for tempo running, the runner needs to have the self-discipline to hold back. “Can you resist the urge to run hard at parkrun every week?” he asks, for those inclined to race the distance so regularly. However, he rightly points out that: “A tempo run does not have to be done every week. You can re-adjust your microcycle of training accordingly.”

As a continuous mode of running, tempo may be harder for athletes with lower training ages to complete, for instance. One way of lessening the load would be the use of what Daniels calls “cruise intervals” (alternatively known as “tempo repetitions”).

Cruise intervals require a run to be broken into non-continuous stretches with short recoveries (Moses typically recommends 20- 30sec). To progress the runner can then aim to progress to sustained tempo runs – that’s to say by joining up the segments.

Alternatively, to progress you could increase the distance of the run thus spending more time in the tempo zone. Another method similar to cruise intervals is forwarded by Moses and it’s the use of “in and out” tempo efforts. “This is where the athlete will go just inside tempo pace, say for one mile, then for the next they slow down and sit just below tempo zone,” explains the coach.

Hills can also be used for tempo. This is the favoured method of US half marathon record holder Ryan Hall. However, there is the caveat that his pace will be considerably slower than when performed on the flat although the perception of intensity will be similar.

Moses, who has worked as an elite sport tutor and mentor for GB’s leading junior athletes, points across the Atlantic when we discuss benchmarking (see AW, Jan 16). He explains: “The American collegiate system has wised up to the value of tempo running when you look at what their elite women marathon runners are achieving.”

In order to understand the future value of tempo running, the coach strongly believes that we must also look into athletics history. So, in mentioning Arthur Lydiard we come full circle to our Kiwi, the legendary Snell, preparing for his famous Olympic double.

Back to October 21, 1964 and a black vest numbered 466 crosses the finishing line in Tokyo, more than 10 metres head of Czech Josef Odlozil and Snell’s compatriot John Davies. In clocking 3:38.1, Snell achieved the 800m/1500m double. His celebratory lap of honour will help clear the lactic from his legs, which will have accumulated over the previous three and three-quarter laps. His superb performances can in part be attributed to the understanding and implementation of the value of tempo running forged with his coach Arthur Lydiard. The training improved his lactate threshold to the point where a third Olympic gold was made to look effortless.

1. Where does tempo running fit into my periodised plan of training?
2. How do I intend to monitor my tempo running in terms of a reliance on numbers or perceptive feel?
3. How can I regress a continuous tempo run to make it easier or alternatively progress it to make it harder?

» Lewis Moses can be contacted through newlevelscoaching.co.uk. Matt Long is leading the national roll-out of youth endurance workshops on behalf of England Athletics