How Bannister trained for and ran his sub-four-minute mile 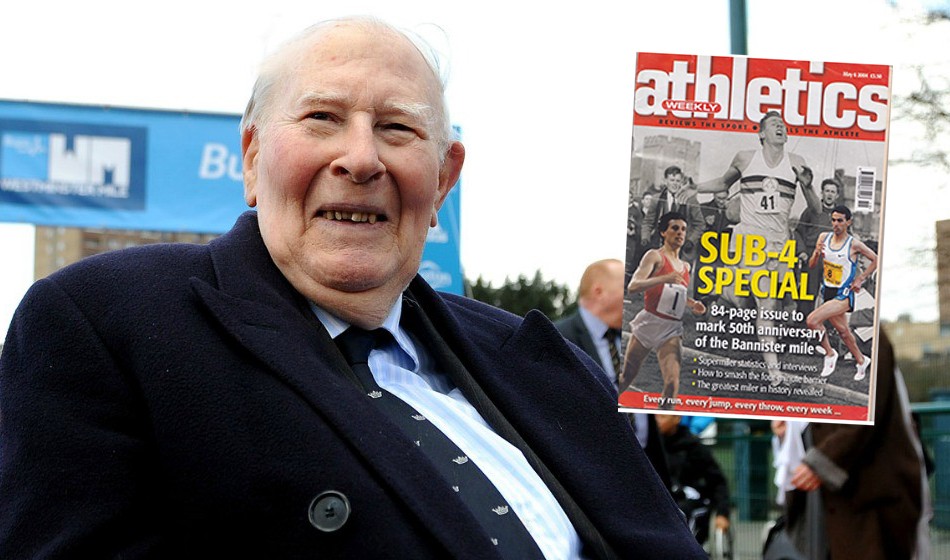 Almost 2000 athletes will by now have paid their own tribute to the great man by lacing up their trainers to take part in the BMC’s Bannister Virtual Mile Time Trials which conclude today. In 2016, BMC chair Tim Brennan was fortunate enough to be part of ‘An Audience with Sir Roger Bannister’. Four years later, it’s an evening in Reading that will live with him forever. Here he shares the late great man’s memories of that unforgettable day on May 6, 1954.

A day at the office

On the day of the record attempt, Sir Roger went into his hospital laboratory which had a grindstone. Back in the 1950s, spikes were fixed to the running shoe and the aim was to give a sharp finish. With attention to detail, Sir Roger rubbed graphite into the spikes so that the cinders from the track would not stick to the shoe.

His travel to Oxford was by train and at this stage he was still in doubt as to whether the attempt should go ahead as weather conditions were decidedly windy and the thought was that conserving energies for more favourable conditions could be the right choice.

His charismatic coach Franz Stampfl was an exuberant character who implored him: “If you have a chance and don’t take it because of conditions you may never forgive yourself”.

Eventually as he stared up from the changing room at the flag flying from the nearby church tower he felt that the wind was reducing and announced to his pacemakers that the attempt was on.

The gun went and as they completed the first lap Bannister recalled feeling “so easy”, as he called “faster, faster” to Chris Brasher who had the good sense to ignore him as they hit the quarter mile at 58 seconds. The pre-race target was sustained through the half mile at 1:58 before Chris Chataway took up the running and hit the three-quarter mile mark in 3:01.

Sensing the moment, with 260 yards to go Bannister strode out with the pain etched on his face as he forced himself through the remaining yards down the home straight feeling that the “tape was receding”.

Once over the line, he had no idea if the attempt had been successful as he collapsed into the arms of his coach for what would be one of the sports’ most iconic and enduring images.

These were the days of pre-electronic timing and stopwatches had to be compared thus ensuring a wait ensued. The announcer, Norris McWhirter, milked the moment as the anticipation in the Oxford air was tangible: “The result of event 10, the one mile.” … pause … “Is won by Roger Bannister of Merton and Exeter colleges” … pause … “In a time which subject to ratification is” … pause … “A new track, British, Commonwealth, European and world record” … pause … “Of three…” The rest was lost in the noise and excitement of the crowd, but the important digit was known. At long last a mile had been won in three minutes-something.

When interviewed about the physiological underpinnings of his achievement, Sir Roger would famously say: “It’s the ability to take more out of yourself than you’ve got”.

Psychology aside, Matt Long digs a little deeper into his training diaries:

In terms of cumulative aerobic volume, in running three or four times a week, Sir Roger averaged less than 30 miles per week in the winter phase of periodisation, regressing to just 15 miles per week during the competition phase of the macro-cycle, which seems staggering by today’s standards.

Bannister’s affiliation to the so-called ‘Paddington Lunchtime Club’ enabled him to fit training around his considerable commitments as a final year medical student at St Mary’s Hospital in London. This being said, the running contribution to his aerobic development was complemented by hiking and his strength endurance by mountain climbing.

One of his favourite track sessions was 3 x 1.5 miles (at around 14:30 pace for 5km). Away from the track, AAA’s coach Jim Alford had been heavily influenced by the thinking of the great Swede, Gosta Holmer, and he signposted Bannister to the playing fields of Harrow School to effect fartlek based training in the winter months.

Bannister’s lynchpin session on the ash track near the Paddington hospital was 10 x 440 yards (effected with a rolling 440 yard jog recovery in approximately 2 minutes). Progressive overload was achieved not by increasing the number of repetitions, nor by reducing the recovery, but rather more simply by incrementally increasing the speed of the reps.

Monthly progression through the winter towards the summer season would see his rep times get quicker by around one second, from 66 seconds in October to well below 60 seconds by May. Bannister’s approach was geared towards engendering race pace specificity and he regularly effected three-quarter mile time trials at Motspur Park in Surrey and is reputed to have beaten the unofficial world best for this distance, previously held by legendary Swede Arne Andersson.

Any decent coach will tell you that to look over your shoulder in a race is a cardinal sin of our sport. Those of you who ran in the BMC Bannister Virtual Time Trials had no need to do so for your nearest and indeed only rival would have been yourself. This being said, the Jamaican political activist Marcus Garvey once poignantly commented: “A people without the knowledge of their past history, origin and culture is like a tree without roots.” – so on this day of all days we are thus allowed more than a glance over the shoulder to those Iffley cinders, which burned 66 years ago today.