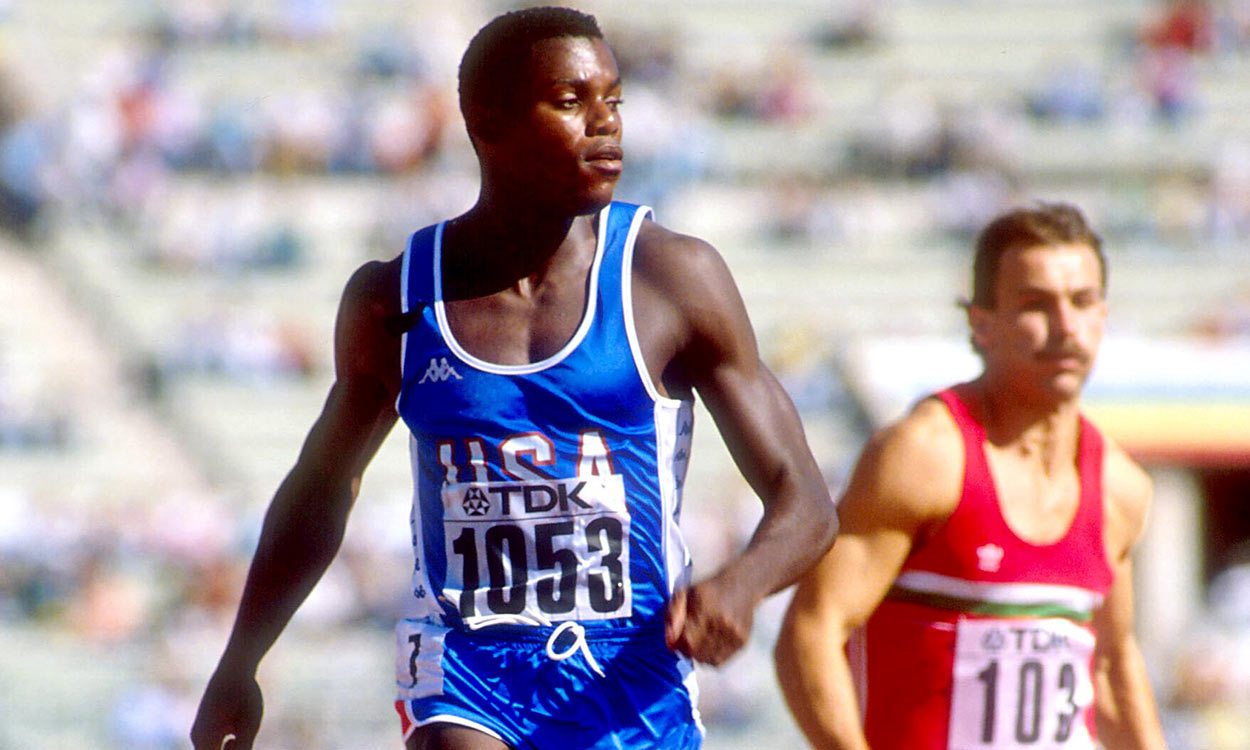 In the next part of the series, Steve Smythe looks at the second championships in the Italian capital

After a glorious start in Helsinki, followed by the Eastern Bloc boycott of the 1984 Olympics, global athletics returned in 1987. It was again a three-way battle for honours, with the Soviets winning on points, but it was East Germany and USA who won 10 golds apiece. GDR won the most medals (31).

The standard was high, the athletics brilliant and it easily overshadowed any previous global championships.

Carl Lewis (pictured) ran the fastest-ever first-round heat of any major 100m – 10.05 – and was the fastest in the semi-finals. However, in the final, despite running a world record-equalling 9.93, he was a full metre behind Ben Johnson, who ran 9.83 after a bullet-start and pick up – a 0.109 reaction time. Johnson eventually lost his record and gold medal for admitting drug use in 1989, so Lewis effectively easily retained his title.

Calvin Smith also successfully defended his 200m title, without the initial loss, but it was close. The American, hampered by a groin problem, only just got up on the line to defeat Gilles Queneherve and John Regis as 0.02 covered the medallists.

The USA had also been favourites in the 400m but Butch Reynolds, who had set a low altitude best-ever 44.10 prior to Rome, was not at full health and finished third. Thomas Schönlebe won a rare GDR men’s track gold with a strong finish to set a European record 44.33. Innocent Egbunike was a well-beaten second but had run 44.26 in his semi-final.

Surprisingly the USA had to come from behind to win the 4x100m with Lewis, officially timed at 8.86, catching the Soviets who set a European record 38.02.

The USA also took gold in the hurdles as both Greg Foster and Ed Moses (see ‘most exciting contest’) retained their hurdles titles.

The 800m saw an almost identical race and pace to 1983, with a Brazilian front-runner. This time Kenyan Billy Konchellah sprinted to victory in 1:43.06.

There was an African winner in the 1500m, Somalian Abdi Bile. After a slow first lap of 63.46, the finishing pace was astonishing as Bile covered the last kilometre in a stunning 2:16.6 with an unprecedented 1:46.6 last 800m.

The closing pace was also special in the 10,000m, won by Kenyan Paul Kipkoech. Victory came courtesy of a 13:25.57 second half giving him a 10-second gap over eventual steeplechase winner Francesca Panetta, who delighted the crowd.

Kenya could manage no better than seventh in the steeplechase but they won the marathon through Japan-based Douglas Wakiihuri. He coped with the 83 per-cent humidity to win by half a minute.

The 5000m was disappointing but did feature a fast last lap, with Olympic champion Said Aouita sprinting clear thanks to a 52.92 finale.

The men’s high jump was a superb competition, with seven clearing 2.32m and a medal requiring a 2.38m jump as Patrik Sjöberg won on countback from joint runners-up Igor Paklin and Gennadiy Avdyeyenko.

Sergey Bubka was unknown at the start of the championships in 1983 but, by 1987 he was by far the world’s best pole vaulter and won gold with just two jumps – his second 5.85m.

The other all-time great, Lewis, retained his long jump title with a superb series. He won with 8.67m and had four jumps over 8.60m. It was not that clear a win, though, as Robert Emmiyan jumped 8.53m for silver.

The triple jump was also of a superb standard as Bulgaria’s European champion Khristo Markov bounded out to the second- longest jump in history – 17.92m.

The shot title went to a European, too, with Swiss Werner Gunthor, throwing a huge 22.23m.

Sergey Litvinov dominated to retain the hammer title with a 83.06m throw, though the javelin was more of a surprise as Seppo Raty, only tenth best in qualifying, moved from third to first with his final throw.

East Germany kept both sprint titles as Silke Gladisch impressed with a 10.90/21.74 double. The latter time was just 0.03 slower than the world record shared by Marita Koch and Heike Drechsler.

Gladisch failed to make it three golds, though, as the USA easily beat them in the 4x100m relay, not helped by a late injury to Drechsler.

Florence Griffith, a year before recording the world records which still stand, was in the winning relay team and second in the 200m.

The 100m hurdles was won by Bulgarian world record-holder Gina Zagocheva in 12.34 but the GDR, second and third there, did win the 400m hurdles. Sabine Busch, who ran the 400m in Helsinki, made up for her lack of hurdling ability with raw speed and won in a fast 53.62.

East Germany did not only do well in the sprint and hurdles as Sigrun Wodars and Christine Wachtel dominated the 800m – Wodars winning 1:55.26 to 1:55.32 – and they also nearly won the 1500m as Hildegard Korner was caught in the last 15 metres by the fast-finishing Tatyana Samolenko.

The Russian had earlier won the 3000m, outsprinting Olympic champion Maricica Puica after Wendy Sly had led at the bell.

The first-ever 10,000m went to Western Europe, though. Ingrid Kristiansen was not fully fit but deterred her rivals by blazing to a 20-second lead after a kilometre. A 15-second lead at the bell became just four seconds at the finish.

Portugal took the honours in the marathon. Rosa Mota won by an astonishing seven minutes and her solo 2:25:17 was the second-fastest marathon ever in a women-only race.

Irina Strakhova won the first-ever walk, held over 10km. In high humidity, the Soviet was 2 minutes 30 faster for her second 5km (20:51) than her first.

Stefka Kostadinova set a high jump world record and Jackie Joyner-Kersee won both the long jump and heptathlon (see ‘athletes of the championships’).

Soviet world record-holder Natalya Lisovskaya edged the shot title, while it was East Germany who won the discus as Martina Hellmann (nee Opitz) became the first-ever athlete to defend a title and Britain won the javelin (see ‘British team performance’).

ATHLETES OF THE CHAMPIONSHIPS

Carl Lewis did eventually win three golds but he was well beaten at the time by Ben Johnson in the 100m. The latter produced the most memorable performance of the Championships, even if it is now erased from the record books.

Stefka Kostadinova produced a performance that still stands, though. She cleared 2.09m at the second attempt, having trailed 1983 winner Tamara Bykova as she took thee jumps to clear 2.04m.

There were doubles for Silke Gladisch in the sprints and Tatyana Samolenko repeated the Mary Decker double from ’83.

The best double, though, came from Jackie Joyner-Kersee who won the heptathlon by a remarkable 564 points and only effectively missed the world record by two seconds in the 800m. Her marks included a 7.14m long jump but, in the individual event, she jumped a huge 7.36m.

Defending champion Drechsler, who shared the world record with the American, injured herself and could only finish third.

There were many great races in Rome but the 400m hurdles easily took the honours.

Ed Moses retained his title, but only just. He had lost his long unbeaten record to Danny Harris the year before and the two Americans took on in-form Harald Schmid.

Moses started fastest and led by a few metres but, instead of his usual domination, this time his opponents started closing. Moses was still clear at the last hurdle but the other two charged at him and all three dipped across the line together. There was just 0.02 between the three medallists with Moses getting the verdict with 47.46 to Harris and Schmid’s 47.48. The German’s time remains the fastest-ever third place in history.

While it was a lot closer this time, it was the same top five as in the 1984 Olympics.

Britain were easily fourth in the points table behind the big three and their eight-medal total also was the fourth-best. However, they only won a single gold.

Fatima Whitbread had missed out on the javelin title in 1983 in the final round and here was competing with a shoulder injury against the world record-holder Petra Felke.

Felke threw 71.76m in the second round and Whitbread responded with a frustrating 71.34m in the third.

In the fourth round, she got it right with a huge 73.14m throw. That and her final throw of 72.14m would have been good enough for gold but the Briton more than showed her dominance with a fifth round 76.64m throw, only bettered by her 1986 world record.

Peter Elliott moved up from fourth in 1983 to take silver at 800m while Jon Ridgeon and Colin Jackson won medals in the 110m hurdles.

Linford Christie moved up to 100m bronze with Johnson’s DQ but John Regis came much closer in the 200m with his bronze, just 0.02 from the gold.

Defending champions did not fare well, though. With neither at their best, Steve Cram (see ‘talking point’) and Daley Thompson both finished eighth.

Thompson lost his nine-year unbeaten record and only led after the 100 metres but won plaudits for his hard efforts.

All three had set 1500m and mile records and it represented the greatest British era at any event.

Cram put up a good defence of his world title, initially, taking the lead after a slow 63-second first lap and then going back in front before the bell. He made his usual long run for home, striding through the third lap in a vicious 53 seconds, but Abdi Bile covered it easily and overtook him along with Jose Luis Gonzalez as they entered the straight. Cram was still well clear in third but, tired and demoralised, he was caught down the straight and ended up walking across the line in eighth, having lost well over four seconds on the Somalian in that last 100 metres.

Peter Elliott did win a silver the following year in the Seoul Olympics before winning the Commonwealth title in 1990, but Britain haven’t won a world medal in the event for 30 years.

» This feature was first published in the February 23 edition of AW magazine, which is available to buy and read digitally here and includes further Rome 1987 stats plus a list of champions. Other IAAF World Championships history features can be found here