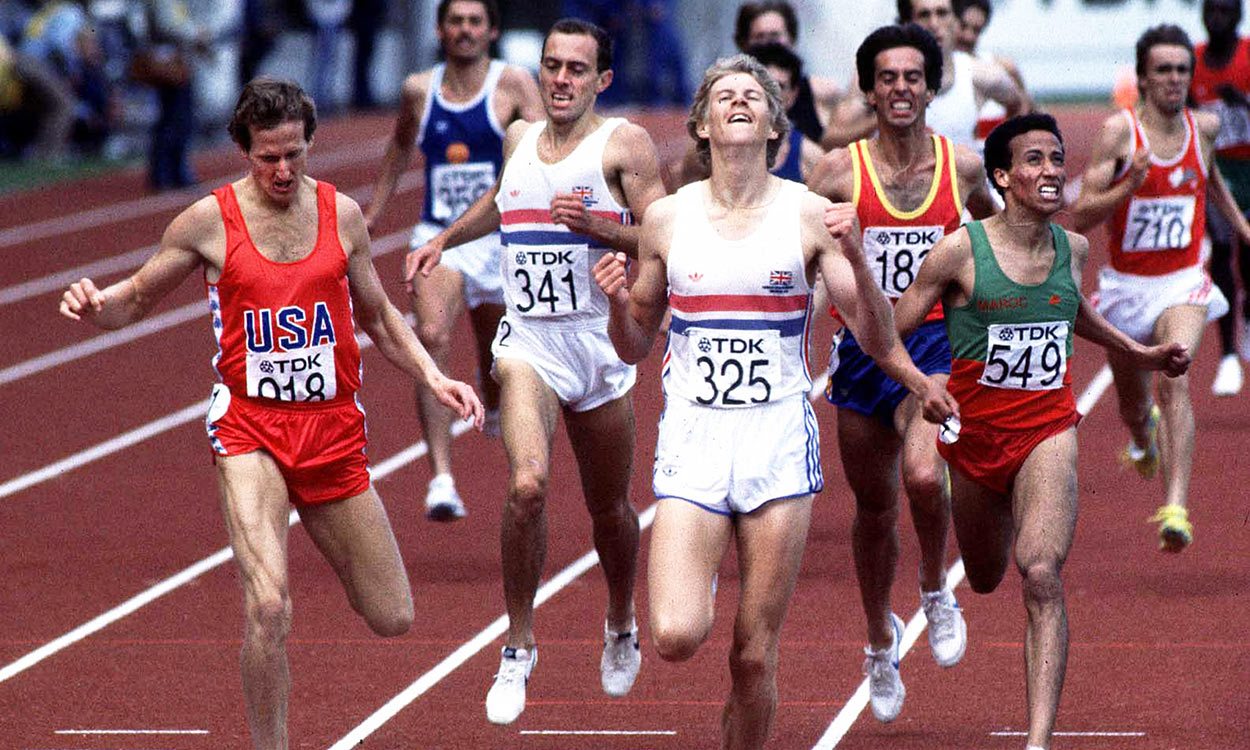 With London 2017 coming up this summer, here is the first feature in Steve Smythe’s series looking back at previous editions of the Championships

The IAAF World Championships made its debut in 1983 in Helsinki to meet a demand that had been growing throughout a traumatic period for the Olympics.

Initially there was controversy over the 1968 Olympics at Mexico’s altitude which meant sea-level competitors were disadvantaged in endurance events. Added to that, the 1972 Olympics had the Munich massacre, while the 1976, 1980 and 1984 Olympics were spoiled by boycotts.

With no World Indoor Championships or even Diamond League events, athletes only had once chance every four years to win a global title, assuming they weren’t the victim of a boycott.

In 1977 there was the introduction of the IAAF World Cup in Dusseldorf but that had a rather contrived format of mostly continental teams and meant a single USA sprinter at 100m or long jump or African in an endurance event, so even the world No.2 couldn’t necessarily guarantee making the team. The World Cups were successful, though, and there were further editions in 1979 and 1981.

Helsinki hosted the first World Championships, where there were no boycotts and most of the world’s top athletes participated. Unlike the 1980 and 1984 Olympics, the top three nations all competed and, in many ways, it was honours even.

The East Germans topped the medal tables thanks to their 10 gold medals but the Soviets narrowly topped the points table. The USA gained the most medals – 24 to the Soviets’ 23 and GDR’s 22.

While it was a highly successful event and there was not a single doping violation, it is worth noting that many of the performances – especially in the field – were pharmaceutically enhanced. However, some of the track races – such as the men’s 100m, 400m and 110m hurdles lacked quality in depth.

Carl Lewis won the 100m easily enough and led a US clean-sweep, while runner-up Calvin Smith easily won the 200m and was part of the relay team that set a 37.86 world record.

The 400m was disappointing with strong-finishing Bert Cameron winning in just 45.05, while the Soviets surprisingly won the 4x400m.

Greg Foster won the 110m hurdles, but after a 13.22 semi, he only ran 13.42 in the final after smashing through the final hurdle. The USA also won the 400m hurdles where 1976 Olympic champion and world record-holder Ed Moses won by 10 metres in 47.50 for his 81st consecutive victory in a final

The men’s 800m was a cracking race with Joaquim Cruz – destined for greatness the following year – and Peter Elliott setting an impressive pace. As Elliott faded in the straight to fourth, Willi Wulbeck came from behind and ultimately won in 1:43.65.

Britain fared better at 1500m (see ‘British performances’) while Ireland had success at 5000m. Eamonn Coghlan, fourth in both the 1976 and 1980 Olympics, famously celebrated on the final bend. Then he sprinted past Dmitriy Dmitriyev! Werner Schildhauer finished fast to match his second place in the 10,000m (see ‘Most exciting event’).

Little-known Gennadiy Avdeyenko won a surprise Soviet gold in the high jump thanks to a 2.32m first-time clearance.

Another Ukrainian teenager with no international pedigree, Sergey Bubka won the pole vault with a 5.70m clearance. Unknown then, he would dominate his event and it would be 16 years before someone else became world champion. Lewis won the long jump while Poland’s Zdzislaw Hoffman dominated the triple jump.

Another Pole to have his day of days was Edward Sarul in the shot. There were European wins for Czech Imrich Bugár in the discus, Soviet Sergey Litvinov in the hammer and GDR’s Detlef Michel in the javelin, the latter with a huge 89.48m throw.

Koch, who was the world record-holder, chose to miss the 400m and lost her world record to the powerful Jarmila Kratochvilova. The Czech, who won the 800m, also gained a 4x400m silver with a 47.75 anchor.

Bettine Jahn, who had only been third in the European Championships, ran history’s fastest time of 12.35 and was celebrating a world record until realising the 2.4m/sec tailwind had negated the record.

The 400m hurdles was a closer affair as Yekaterina Fesenko edged Soviet team-mate Ana Ambraziene 54.14 to 54.15. Note, she was not the first world champion as there had been a 1980 separate championships in Sittard won by Barbel Broschat in 54.55 from Ellen Neumann. The latter finished third in 1983 as Ellen Fiedler.

In the 1500m, Zamira Zaitseva followed Decker and then sprinted past and cut across her, causing her to chop her stride. A five-metre gap opened up but Decker fought back with a superb sprint. She regained the lead in the last 10 metres and the tiring Russian lost balance, falling across the line as the crowd roared their approval.

Another great champion, Grete Waitz, won the marathon. The first ever global 26.2-miler for women saw the Norwegian pull off one of the most popular victories of the week and she won easily by three minutes.

There was no such thing as equality in women’s athletics back in 1983 and there were only five field events.

Heike Daute was aged just 18 and European junior champion but won a quality long jump with a windy 7.27m. At the time, under the East German regime, she was doping but later under her married name – Drechsler – she would be regarded as an all-time great.

The women’s shot saw Czech Helena Fibingerova surprise the East Germans with a 21.05m final throw. The East Germans supplied their own shock in the discus, with their expected No.2 Martina Opitz winning easily in 68.94m as Soviet world record-holder Galina Savinkova could finish only 11th.

The javelin went to form but only in the last round as Tiina Lillak defeated Fatima Whitbread (see ‘British performances’). Ramona Neubert led a GDR clean sweep in the heptathlon.

ATHLETES OF THE CHAMPIONSHIPS

While he was to go one better in Los Angeles with the addition of gold at 200m, Carl Lewis was certainly the media’s star with three golds. He won the 100m by a metre and a half in 10.07, thrashed the opposition in the long jump with an 8.55m leap and then anchored the US relay team to a world record.

While there were no sprint or distance doubles that have been commonplace in recent championships, there were some notable doubles and two athletes took the four events between 400m and the longest track race, the 3000m.

Mary Decker did the distance double, both in exciting races as she front ran, got challenged and then sprinted to victory.

The top medallist, though, was Marita Koch, who though she lost her world record at 400m, won the women’s 200m, was second in the 100m and won two relay gold medals. She ran 11 races in Helsinki though fans were disappointed she did not run the 400m against the Czech!

Nearly every middle-distance race enthralled the crowd but the best was the men’s 10,000m, where five abreast entered the straight. Alberto Cova, running in lane four, moved from fifth to first in the last 30 metres. He covered the last 300m in 38.7 and won in 28:01.04 as the leading five finished within a second.

Daley Thompson, the 1980 Olympic and 1982 European decathlon champion, was in theory Britain’s banker. However, the decathlon star had missed 14 weeks of training with back and groin injuries, and only made a late decision to compete against world record-holder Jurgen Hingsen.

Steve Cram was the reigning European and Commonwealth champion but this was his first global win. He ran a superb 1500m race. Tipped off that Saïd Aouita was going to make a move 500 metres out, he was well positioned when the little Moroccan accelerated hard. Cram followed him round and then sprinted past 200 metres out. With his long stride, he pulled away from Aouita down the straight. Though pre-race favourite Steve Scott closed a little in the early part of the straight, Cram won by over two metres in 3:41.59.

For much of the women’s javelin, it looked like Britain would win, even though Fatima Whitbread had been suffering from tonsillitis, and was only 12th in qualifying. In the final, she felt much better in the first round, throwing 69.14m. That stayed in the lead until the penultimate throw of the competition. Then, urged on by a capacity 54,000 crowd, world record-holder Tiina Lillak unleashed a 70.82m and both Lillak and the home support went crazy. After the roar had died away, Whitbread was unable to respond and had to settle for silver.

Kathy Cook won a superb bronze in the 200m with a 22.37. The two athletes behind her, Florence Griffith and Grace Jackson, would run around a second faster in the 1988 Olympics!

Cook was also part of an excellent women’s sprint relay team. Well behind the East Germans, they ran 42.71 to take silver as Shirley Thomas just held off Jamaica’s Merlene Ottey.

Colin Reitz picked up a surprise bronze aided by Henry Marsh’s final barrier fall, while the men’s 4x400m team was also fortunate to pick up a bronze in a slow time as the USA team was hampered by a fall.

Near misses included Peter Elliott, a brave fourth at 800m, an event in which Seb Coe withdrew late due to illness. AW’s managing director, Wendy Sly, was fifth in both the 1500m and 3000m. Allan Wells missed a medal in the 200m by 0.01 as Pietro Mennea repeated his late rush from Moscow 1980 to deny the Brit.

Bev Kinch jumped a windy 6.93m backed up by a British record 6.90m and could only finish fifth in the long jump.

World record-holder Steve Ovett should have joined Steve Cram on the podium. He was clearly in form as he improved his world record not long after Helsinki but he ran a poor tactical race and was hopelessly placed when Saïd Aouita made his move and, despite a fast kick, could move up to no higher than fourth.

Ovett had a reputation as a master tactician but some observers feel that was generous. He made errors in the 1974 and 1978 European 800m races and 1976 and 1980 Olympics. He was fortunate to avoid disqualification in the Moscow 800m, where he won easily thanks to Seb Coe’s even poorer tactical performance.

» This feature was first published in the February 16 edition of AW magazine, which is available to buy and read digitally here and includes further Helsinki 1983 stats plus a list of champions. Other IAAF World Championships history features can be found here