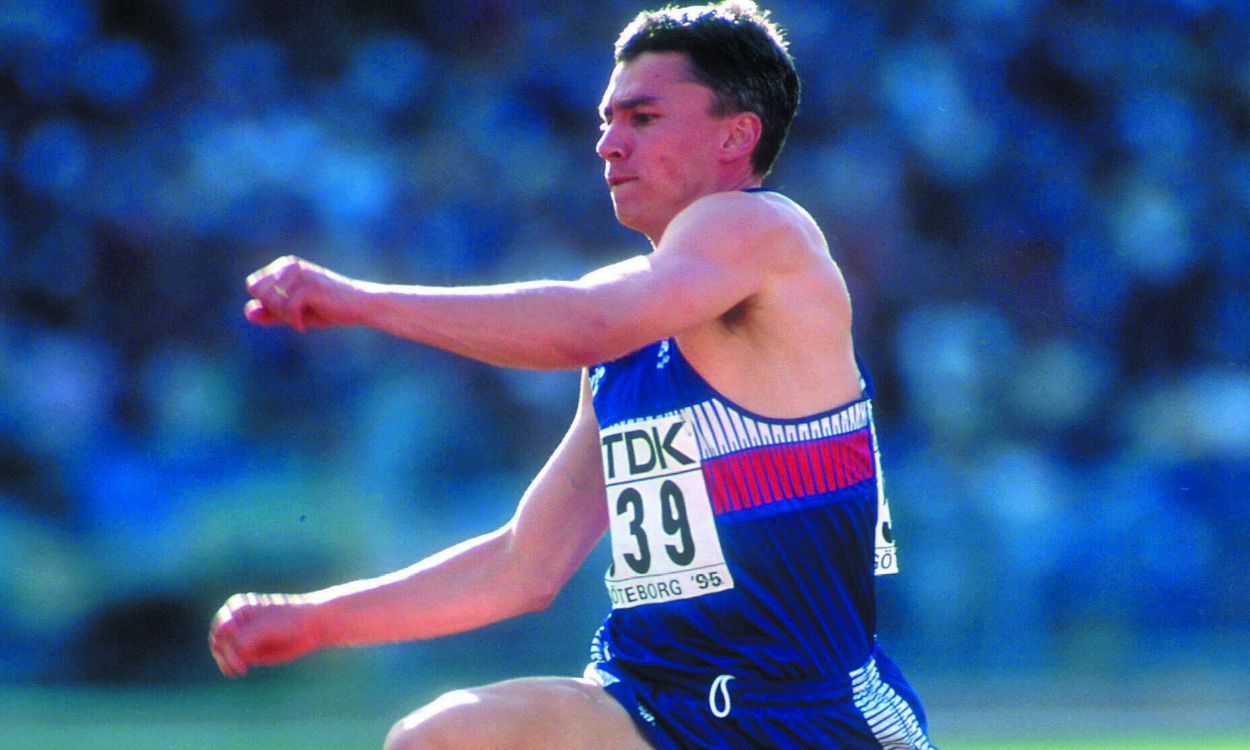 In the next part of the series, Steve Smythe looks at the fifth World Championships, held in Sweden

The World Championships had first gone into a two-year cycle in 1991, and with the Olympics in 1992 it meant global championships were held on three successive years.

The relatively low-key 1994 meant athletes were raring to go again in 1995 and it was another superb event. Michael Johnson was the individual star with his unique 200m and 400m double, though the world record performances in the two triple jumps – both of which still stand – and the 400m hurdles meant it was an unforgettable experience.

While yet again there were more countries than ever winning gold medals and making finals, the United States dominated, claiming 10 more golds than any other country.

Johnson first tackled the 400m and in his fourth race in four days, blazed a 20.3 middle 200m and his 43.39 just missed the world record. It was his 46th successive final win and the margin was the most in a global one-lap final for 99 years.

He returned for four more races at 200m and there in his eighth race in seven days, went flat out for the world record and just missed the 19.72 with a 19.79, becoming the first man to do a global double.

Johnson looked more human in the 4x400m final as his 44.11 anchored USA to a two-second win.

The men’s 100m saw Commonwealth athletes take seven of the eight places with just one American, Mike Marsh, in fifth. Donovan Bailey won easily in 9.97 from team-mate Bruny Surin and the pair also spearheaded a Canadian 4x100m gold with the Americans failing to negotiate the heats.

Kenyans had dominated the major 800m races since 1987 and a Kenyan-born athlete won easily again here. However, Wilson Kipketer did it in the colours of Denmark, even though he hadn’t acquired full citizenship.

Another easy winner was Noureddine Morceli who won his third successive 1500m title with a vicious 51.28 last lap, where the damage was done with a 25.2 penultimate 200m and he was then able to blow kisses and ease off in the straight to still beat up-and-coming Hicham El Guerrouj by over 1.5 seconds. Morceli set 1500m and mile records that year.

The 5000m wasn’t of the same standard as Ismael Kirui found a modest 56.56 last lap enough to successfully defend.

Haile Gebrselassie retained his 10,000m title with a superb 25.1 last 200m. His time was 27:12.95, the fastest ever major championships 25-lapper and he was chased home by Olympic champion Khalid Skah and Paul Tergat.

Yet another defender was Moses Kiptanui, in the year he became the first man to break eight minutes. He won his third successive 3000m steeplechase title and his 8:04.16 was also the best ever global time. He eased to victory and still won by five seconds.

Spain won the marathon as Martin Fiz sped by Dionicio Ceron at around 40km to win by 32 seconds.

Europe also were successful in the walks as Italian 21-year-old Michele Didoni won the 20km and Finland’s Valentin Kononen went one better than in 1993.

The men’s high jump was another quality event with five over 2.35m. Troy Kemp won on countback from defending champion Javier Sotomayor with a 2.37m.

Three jumped 5.86m in the pole vault but the predictable winner was Sergey Bubka who won his fifth successive title and only needed three jumps to take gold with 5.92m. He also had a close attempt with one of his 6.15m world record jumps.

There was a record in the triple jump, though (see ‘British team performance’).

The shot was nothing special as John Godina won by half a metre and Lars Reidel was similarly dominant in the discus in winning his third title by nearly three metres.

Andrey Abduvaliyev retained his hammer crown with a final round 81.56m to deny Igor Astapkovich, who won his third successive silver to go with his Olympic silver. The three medallists were in the same order as 1993.

It was also as you were in terms of winning with the javelin as Zan Zelezny won easily with 89.58m and in the decathlon through a below his best Dan O’Brien who won his third title.

Running in borrowed shoes as hers had been stolen, it later became clear she had stepped on the line and was disqualified. Gold thus went to Merlene Ottey, who won her fifth successive 200m medal.

In the relay, Torrence gave America victory just ahead of Ottey’s Jamaica in 42.12. The latter won a remarkable 13th medal. USA also won the 4x400m and the 100m hurdles as Gail Devers successfully defended easily.

The 400m was won in a fast time by Marie Jose Perec in 49.28, catching Cathy Freeman, who overdid it with a 23.3 first 200m and ultimately faded to fourth. The timetable was changed to enable Perec to attempt a double in the 400m hurdles but she chose not to compete and she missed a cracking race (see ‘most exciting contest’).

Ana Quirot won the 800m in 1:56.11, helped by Maria Mutola being disqualified from the 800m semi-final for stepping on a line which ended her 42-race three-year unbeaten run.

Hassiba Boulmerka retained her 1500m title courtesy of a 29.5 last 200m. The clear world No.1 at 1500m, Sonia O’Sullivan, competed instead in the first ever 5000m, where a 28.8 final 200m gave her a two-second win over the 10,000m winner Fernanda Ribeiro. The latter outsprinted Olympic champion Derartu Tulu and so Portugal also won the marathon. Manuela Machado led home five other Europeans and her run would have been a big PB but the runners all did a 400m lap short at the start before leaving the stadium.

The 20km walk saw a European top seven led by Irina Stankina, who at the age of 18 became the youngest ever gold medallist at any event.

The triple jump was held for the second time and, just as in 1993, there was a world record.

Many thought this fledgling event was hardly scratching the surface of its potential and no would have guessed 22 years later that this would still be the record.

The day after the men’s world record, Inessa Kravets was jumping after two fouls but instead of going for a safe jump to qualify, she added an incredible 41 centimetres to the two-year-old record to become the first woman over 50 feet with a 15.50m. Ira Prandzheva also broke the old world record with a 15.18m leap.

World high jump record-holder Stefka Kostadinova, who had given birth to a son earlier in the year, made a late decision to compete and despite going to Sweden with a modest 1.94m season’s best, she was the only jumper over two metres as she won with a 2.01m leap.

Fiona May, who won a world junior title and failed to make the final in 1993 when in British colours, pulled off a shock long jump win for Italy with a very windy (4.3m/sec) 6.98m.

The two athletes who had dominated world long jumping for more than a decade, Jackie Joyner-Kersee and Heike Drechsler, failed to get a medal.

The heptathlon had looked like it might be a battle between the pair but both defending champion Joyner-Kersee and 1994 world No.1 Drechsler failed to finish.

Ghada Shouaa was a shocking winner, courtesy of a 54.92m javelin throw. Syria’s previous best result in any event was Shouaa’s 24th in 1991!

Germany’s Astrid Kumbernuss won the shot title by over a metre and Ellina Zvereva dominated the discus. Belarus also won the javelin thanks to Natalya Shikolenko.

For the second championships running, there was an exciting two-way battle for gold at 400m hurdles that ended in a world record with second also inside the old record. That was a surprise as many thought the event looked weak prior to the event with a mediocre 56.75 making the final.

Kim Batten and Tonja Buford battled all the way to the line and it was only Batten’s superior dip that gave her a 52.61 to 52.62 victory. Buford had been outside 55 seconds in her qualifying races.

In 1995, Jonathan Edwards (pictured) had set a world record 17.98m in the triple jump and on four other occasions had broken 18 metres but the wind had been over the limit. In Sweden, he got perfect conditions and in the opening round jumped a huge 18.16m – sensational enough – but with his next jump, sailed out to an unbelievable 18.29m, winning by an incredible 67cm with the next three all benefiting from windy jumps.

It was Britain’s only gold. Their big three from Stuttgart didn’t make an impression. Colin Jackson missed the event due to a mixture of a niggle and an argument with British Athletics. Sally Gunnell also didn’t compete. Linford Christie did but wasn’t fully fit, however he beat Bailey in Zurich shortly afterwards and had a superior win- loss record over the season to the two Canadians who beat him.

Steve Backley moved into second with his final throw in the javelin.

Dan O’Brien easily won the decathlon in Sweden but you wouldn’t have known he was a clear winner immediately as he was only the 17th fastest in the final event, the 1500m.

Surely it would be possible for the combined events to have a handicapping system for the final event so the leader sets off in front, with the appropriate gaps to the competitors, so the final order of the last event is also the order of the overall competition?

» This feature was first published in the March 16 edition of AW magazine, which is available to buy and read digitally here and includes further Gothenburg 1995 stats plus a list of champions. Other IAAF World Championships history features can be found here