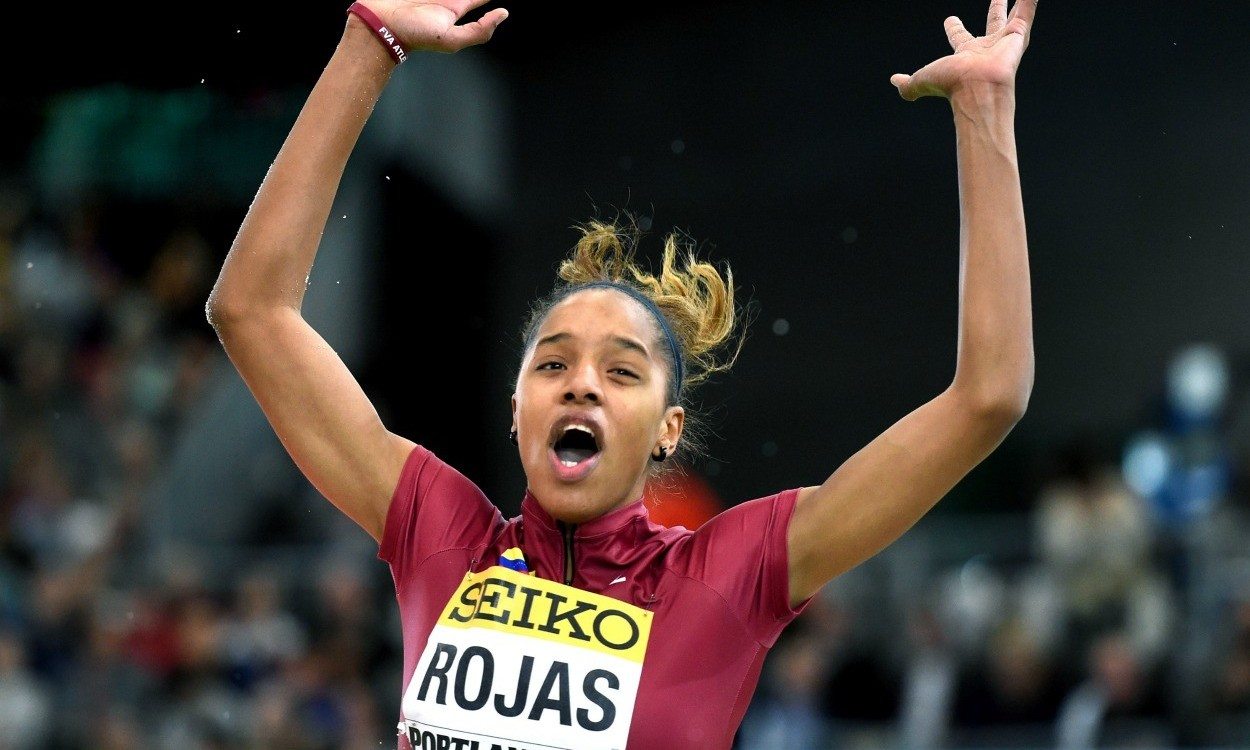 Yulimar Rojas took a hop, step and jump from virtually nowhere to being a contender for a medal in Rio, writes Paul Halford

Sixty-four years after Venezuela’s only athletics medal at the Olympics, Yulimar Rojas will be hoping in Rio to claim the country’s second. It would be at the same age and in the same event in which Arnoldo Devonish became the first in any sport to make the Games podium for the South American nation.

Devonish triple jumped 15.52m to win bronze in 1952 to make history for the country of 30 million, which despite having a population of around half that of Britain is a minnow in athletics terms.

No one has since represented Venezuela in the triple jump at the Olympics, but when 20-year-old Rojas leapt 14.41m to take world indoor gold in Portland earlier this year she put the nation on the athletics map.

Yulimar Del Valle Rojas Rodriguez was born in Caracas but grew up outside the capital in a crudely built shack. “It was crumbling,” she said. “When it rained we would get wet inside.”

Using her height to her advantage – she is now 6ft 4in – at 14 she played basketball but gave it up because of a lack of coaches where she lived. So she took to athletics instead and immediately displayed potential.

She first competed in the shot put and, although she won, did not do it again, instead turning to the high jump.

In this event she registered 1.81m, a national junior record, at the age of only 15. This ranked 11th on the world under-18 rankings for 2011, but her early opportunities to compete at events like the IAAF World Youth Championships were denied by her estranged father, who refused to give the necessary permission for her to leave Venezuela as a minor.

After eventually being able to compete abroad and a win at the South American Junior Championships, she went on to switch to the long jump under her first coach, Jesus Velasquez.

In her breakthrough year of 2013, she set two national junior records in one day – 1.87m and 6.17m in the high and long jump respectively. The former remains a South American junior record and ranked her among the world’s top 10 juniors.

That year she displayed the speed which would show that perhaps the horizontal jumps are where her future would lay, clocking 11.94 for 100m.

However, it was soon afterwards that she would switch to the triple. She recorded 13.57m on her debut. For comparison only one British athlete jumped further last year. “I started to feel attracted by the triple jump,” she explains about her start in the event. “I felt comfortable doing it, but my coach was not sure about changing events. I spoke to him and managed to convince him to allow me to try the triple jump in a small meet where there would be nothing at stake. I had a feeling I could jump well but did not expect to jump that far. After that I became more and more motivated by the triple jump.”

She would later say: “I believed I could do well in this particular event, considering my height, my speed, and my power.”

The president of the Venezuelan athletics federation, Wilfredy Leon, said: “When we saw her competing in the triple jump we realised she had great potential. She did not do a proper step, she would simply stretch her leg. We knew that when she learned to do it she would be able to jump far.”

However, her first experience at a major global championships was disappointing. At the 2014 World Juniors in Eugene she was 11th in the long jump with 5.81m and went out in qualifying in the triple jump with 12.99m.

Nevertheless, she started well in 2015 and set national records of 6.57m and 14.17m at the Venezuelan championships, gaining selection for the latter at the Worlds.

Later that summer she had experience of competing against the world’s best, improving her national mark to 14.20m at the Pan American Games in Toronto. There she was fourth behind the winner, Caterine Ibarguen, the Colombian who will be the No.1 obstacle to her goal of winning in Rio.

“I believed I could do well in this particular event, considering my height, my speed, and my power”

Ibarguen, who comes from a neighboroughing country of Rojas, last tasted defeat when taking silver in London 2012 and has since won both world outdoor titles.

However, with her season having started in February, she decided against the chance to take on the Colombian again at the Worlds in Beijing.

“I came back from Toronto with a lot of pain in my joints,” she said. “I did everything to try to recover on time, but it was not possible. Watching the world championships on TV I realised I could be among the world’s best. Except for the top six or seven women all other jumps were at my level. I started to believe that I could one day become world champion.”

The chances of that happening significantly improved after Ivan Pedroso, the nine-time world long jump champion indoors and outdoors, popped up as a friend suggestion on Facebook and she acted without hesitation.

“Immediately I wrote, I said I admired him very much and my dream was to train with him, and what was my surprise when he heard me and told me I was following my career because he felt that I was very talented,” she said.

With the support of her federation she went to Spain to train under the Cuban legend. “We knew that the only way to fulfil her potential would be for her to train outside the country, with more competitions and under the guidance of a man like Pedroso,” said Leon.

Pedroso recognised her great potential. “Yuli is achieving all her goals I set out as a coach,” said the man who also coaches France’s 2013 world triple jump champion Teddy Tamgho. “We are now focusing on her speed, run-up and take-off. She has no limits. When she is focused on a competition, she can be a very dangerous rival and exceed all expectations.”

The partnership has worked well. After her win in Portland, Rojas said: “We bonded well and it’s been a fascinating experience so far.”

That was clear this indoor season when she opened with a world lead of 13.97m and then improved to 14.69m – 49cm further than her outdoor PB.

After that South American indoor best, she said: “I was surprised when I achieved that record. During the training sessions, I felt stronger, more confident, and I knew good things may come, that I needed to be patient and I know I can be patient. In my previous competition (in Madrid in January) I had used a nine-step run-up and jumped 13.97m. But on that day Ivan agreed that I use a long run-up, 11 steps.

“It was a wonderful day, but for me that was not a goal, it was just a beginning. The best is yet to come.”

With two other jumps further than the next best on the world rankings, she went into the World Indoors as favourite, which would have been considered highly unlikely before the start of the year.

Although she had only one valid jump at the Oregon Convention Center, her 14.41m was enough to give her victory.

“I’m very happy and proud of my accomplishments, especially working for the past four months with coach Ivan Pedroso,” she said. “I’m sure my coach in Venezuela, Jesus Velasquez, will be jumping for joy. I came here for the medal, and won it for the people of Venezuela and my family.

“I proved that I have what it takes, that I have the talent to be among the world’s best for the Olympic Games. That is the challenge for this year. That’s my dream. Between now and then I will continue to work to improve every aspect of my technique, my speed.”

“It was a wonderful day, but for me that was not a goal, it was just a beginning. The best is yet to come”

She believes she can jump over 14.50m in every competition. That sort of consistency will be needed if she is to win a medal in Rio and do her country proud by emulating Devonish, whom she says was her “only reference” as regards to sporting heroes when growing up.

“Venezuela never had a medal [at the World Indoors] so that was my drive and motivation,” she said in Oregon. “That was what led me to perform today.”

She will need further inspiration if she is to improve further to take gold in Rio.

A gold for South America looks likely in this year’s Olympic women’s triple jump. At the moment it looks like going Colombia’s way, but don’t bet against it going across the border.