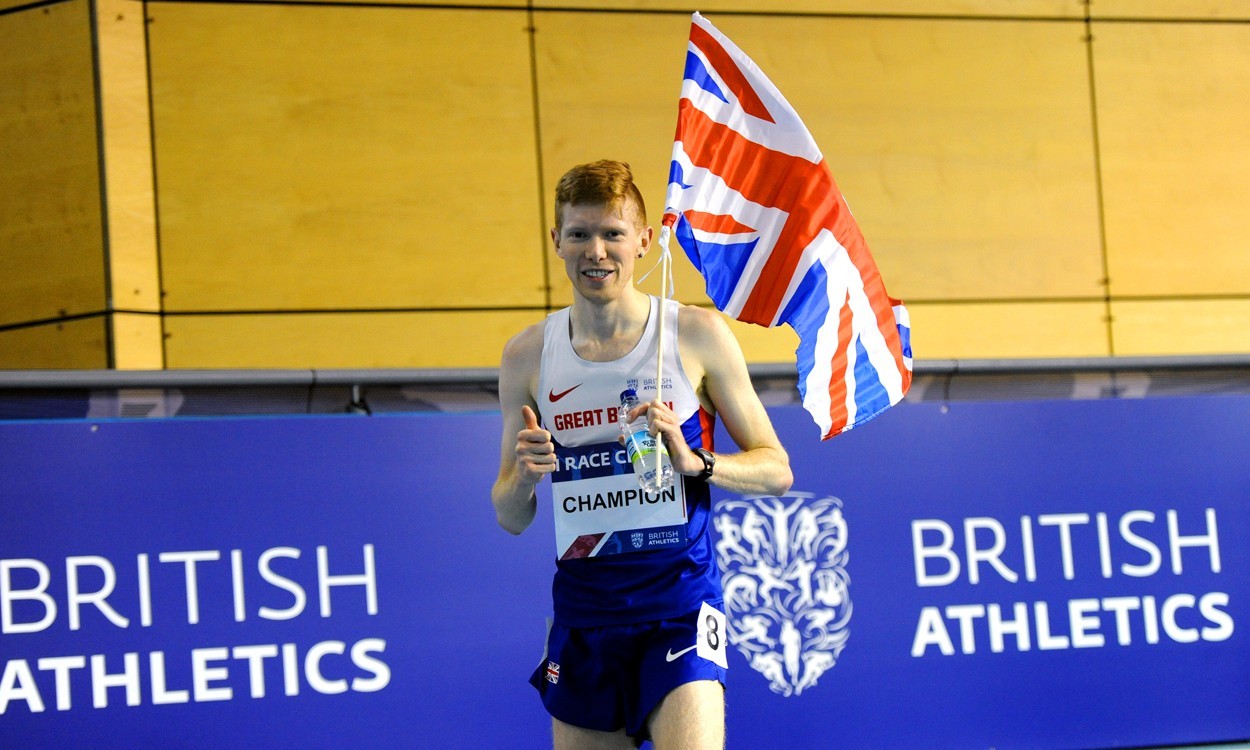 It used to be the case that fans and officials would disappear for their lunch break when the race walks at the national championships took place. The events still happen at midday, but Tom Bosworth and his fellow race walkers are turning the discipline into a must-see event.

On Saturday in Sheffield the 3000m race walks saw two British records – the first from Bethan Davies as the Cardiff athlete clocked 12:44.99 to win by a minute. Then Bosworth smashed his national best by 17 seconds with 10:58.21.

He could also have come a little closer to Andeas Erm’s world record of 10:31.42 if he had not enjoyed the final stages so thoroughly by waving to the crowd and show-boating his way to victory.

This is partly why Bosworth is becoming so entertaining to watch, though. After crossing the line he danced in front of the crowd and then left them to reflect on how many people can actually run 3km that fast, let alone walk it.

“The really serious stuff starts now,” said Bosworth, who is not only racing superbly lately but doing a great job of publicising his event. “I have got the Olympic qualifying time and I want to get better and improve my PB.

“I want to go to the Olympics knowing that I can be up there with the best. I have been getting quicker and quicker over short distances and now I want to do it over the 20km and show that I can do it internationally as well.”

Bosworth is helping the race walks lose their Cinderella status and is keen to live up to a fine British tradition that includes Olympic gold medal-winning performances in the 1960s from Ken Matthews and Don Thompson. The 26-year-old will also look forward to racing at this championships over 5000m next year – a distance he recently set a UK record of 18:54.18 at.

“I feel really happy, I love racing indoors in front of a home crowd. I want to make race walking really popular so people can see it is a fun event and that I can walk faster than most people can run and help people connect to that. You cannot just be boring on the track.”

Bosworth was hot favourite to win his event, but the second and final day of the championships as usual threw up a host of surprises. One of the upsets came in the final event of the weekend, the women’s 800m, when Adelle Tracey came from third to first in the final 100m to beat Lynsey Sharp and the front-running Jenny Meadows in 2:02.99.

Behind Tracey, Leah Barrow also finished fast to get second place in 2:03.18 as Sharp was third and Meadows fourth. 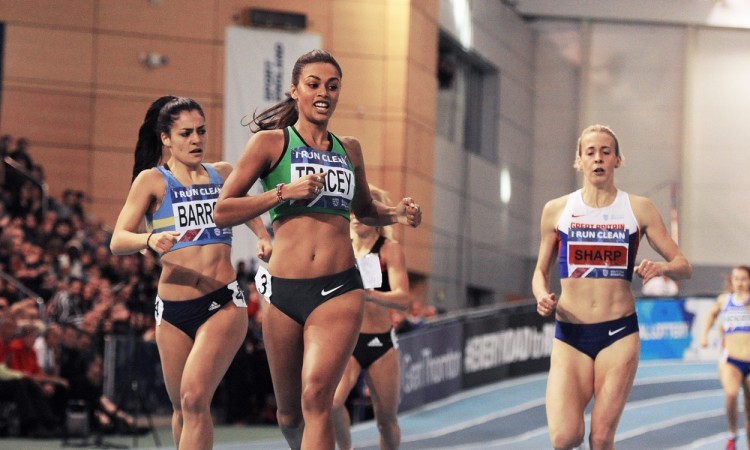 In the high jump, Chris Baker won an exciting head to head with Robbie Grabarz. The in-form athlete of the season, Baker showed his ability with a 2.29m clearance and then came very close to 2.31m, while London 2012 medallist Grabarz put up a great challenge with a best of 2.26m followed by two failed attempts at 2.31m.

Nigel Levine will be disappointed with this 400m time of 48.00, but it was his sixth national indoor title – a fine achievement as he held on to win with his rivals closing fast in the final straight.

The men’s 800m was missing Mike Rimmer after his DQ from the heats and looked to be a race between Mukhtar Mohammed and Guy Learmonth. But after a slow 57-second first half, firstly the lead Mohammed was cut up and faded backwards and then Learmonth looked like the winner as he powered around the final lap but was passed by Jamie Webb and Spencer Thomas in the closing metres – Webb taking gold in 1:51.25.

Another runner in form is Steph Twell, who ran 8:54.99 to win the 3000m, while runner-up Jo Moultrie also ran under nine minutes with 8:58.75 – both inside the World Indoor Championships qualifying standard.

Tiffany Porter will go to the World Indoors as a medal contender after clocking 7.98 to win the 60m hurdles from Serita Solomon’s 8.05 and Lucy Hatton’s 8.15 with Yasmin Miller fourth in 8.16 in a high-quality final.

One of the breakthrough performances came in the men’s 200m. Last year, Toby Harries was sixth in the IAAF World Youth Championships and does not turn 18 until late September this year. But on Saturday the Brighton Phoenix athlete won the 200m senior title in Sheffield with 21.13 from Ben Snaith and David Lima after a strong finish from the outside lane.

The women’s long jump was missing Shara Proctor but was still a quality contest with Jazmin Sawyers winning with with 6.67m from Lorraine Ugen’s 6.60m.

Elsewhere in the field, Scott Lincoln won the men’s shot put by more than a metre with a PB of 18.90m, while Aled Davies threw 16.14m to break his own IPC world record. Sinead Gutzmore took the women’s triple jump with a PB of 13.35m, as Luke Cutts was dominant in the pole vault with a 5.60m victory over Andrew Sutcliffe’s and Max Eaves’ 5.45m.

In the women’s 1500m, Hannah England showed a good return to form in Olympic year as she out-sprinted Alison Leonard to win in 4:15.45. Meghan Beesley took the women’s 400m in similar strong style in 53.15 from Montene Speight.

Charlie Grice won the men’s 1500m final in 3:46.50 from James Brewer in a race that saw Mike Rimmer pull out with two-and-a-half laps to go when placed on Grice’s shoulder in third.

Rimmer had been disqualified from the 800m the previous day – one of a number of DQs that included, on Sunday, Chris Clarke in the 200m semi-finals.