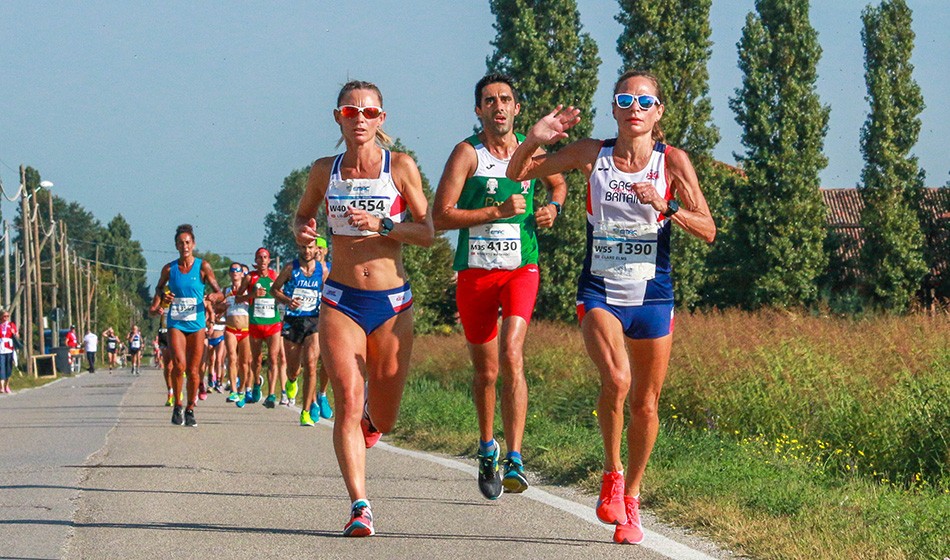 Britain won 14 golds on the final day of the European Masters Championships in Venice to go over the 100 mark but that was dwarfed by Italy who won 26 titles on the day.

Most of those were team titles where the home nation has a huge advantage as they have the greatest number of athletes to choose from and Italy pipped Germany at the top of the table with 127 golds to Germany’s 119.

For Britain, Wendy Laing won in the field and there was further success for the relay squads, who again were in record-breaking form.

Clare Elms won her sixth gold and seventh medal – the most by any runner in Venice – as she easily won the 10km to follow her gold medal successes at 1500m, 5000m, 10,000m, cross-country and cross-country team.

Her time was 37:56, which would have won the W45 title, put her top of the UK rankings and she won by three minutes from Italian Elena Giovanna Fustella.

Alastair Walker arrived late at the championships and only had time to win the 5000m before again dominating the M60 age group.

The Scot won in 35:28 to win by over a minute from Tore Axelsson from Sweden.

Simon Baines won the M45 title in 32:30 to win by 19 seconds from Sweden’s Kristian Nedregaard and go one place better than he did in the World Masters race in Torun earlier in the year.

The other British gold medallist was slightly lost among the masses but M75 Victor Shirley, already a winner at 1500m and 5000m, won his third individual gold in 45:44, 22 seconds ahead of Spain’s Emilio de Carrera.

Lisa Palmer-Blount, who had been fourth in the W40 5000m, went one better in the 10km after picking up in the latter kilometres when Elms encouraged her to keep going.

The overall 10km was won by Spain’s M40 Manuel Angel Penas in 31:00 though Italian Said Boudalia’s 31:20 to win the M50 gold having battled with Penas for 8km, was arguably a better performance.

Belgian W35 Mieke Gorissen was first woman in 34:43 to follow her successes in the cross-country and 5000m.

Britons found the half-marathon, which was held after the 10km started and therefore in even warmer conditions, a much tougher proposition but the British numbers were much greater as there was no team event at 10km but there was in the longer event and it attracted some athletes who have the opportunity of team medals.

Some did enjoy individual success, however.

Paul Mingay won M60 gold in the event to complete astonishing dominance in the age group in Italy.

The world champion in Malaga obviously likes the Mediterranean climate as he ran 2:47:40 in Seville earlier in the year, just a minute outside the British record.

He also won a M60 team bronze as Italy won.

Whelpton, who was third in the World Masters at this event and second at 10km last year, won by two minutes for his best ever victory and had the added bonus of leading Britain to a 10-minute team win.

Angela Copson, who chose a curious 800m and half-marathon double, was after her impressive 800m win, surprisingly well beaten in the longer road race.

Copson was a distant second in 1:51:26 while Penny Yule won her fourth medal of the championships with a bronze in 1:53:08.

Alison Bourgeiois, who dominated the world indoor 800m, 1500m and 3000m, also moved up in distance here as she is focussing on an autumn marathon.

Ireland’s Paul Moran won the M55 title in 77:20 with Ben Reynolds taking the bronze in 80:09 after Steve Watmough faded in the heat in the second half after being in a clear medal position at halfway but he was in the winning team as Britain won by two minutes from France.

In the field, the star UK performance came from Laing.

The world indoor high jump champion was on a different level to her W55 opponents and had first time clearances all the way up to 1.47m before failing at 1.50m.

She won by six centimetres from Frauke Viebarn of Germany.

Steve Peters and Caroline Powell won their fifth gold medals of the championships as they added the 4x400m to their collection.

Peters’ title was a formality as they had no opposition in their age group and alongside Simon Barrett, Adrian Essex and Ian Broadhurst, they ran 4:10.87 in the combined M65 and M70 race and there were curiously five over-70 teams.

With Peters in the team, it wouldn’t have mattered who showed up in the M65s and even without any pressure their 4:10.87 was less than two seconds outside the European record.

It was also hardly any surprise that Powell won the 4x400m title. Having the new European record-holder in any team gave them a head start but as they could also count on W65 runner-up Joylyn Saunders-Mullins the previous W65 champions Caroline Marler and Ros Tabor, a former winner of the European Indoor W65 event.

Despite a lack of opposition – they won by almost two minutes – the team set a European record 5:00.12 by five seconds.

Saunders-Mullins, who followed Powell home in the three sprints, won her fifth medal while W70 Tabor won her sixth.

The race was in the combined W60 and W65 race and it was the British W60 team that followed them.

There was also a walk-over for the W55 team, which meant 400m and 800m champion Virginia Mitchell won her third gold.

However, the lack of opposition did not affect them as Mitchell teamed up with double hurdles champion Julie Rogers, 800m and 1500m medallist Christine Anthony and 400m silver medallist Janice Ellacott. 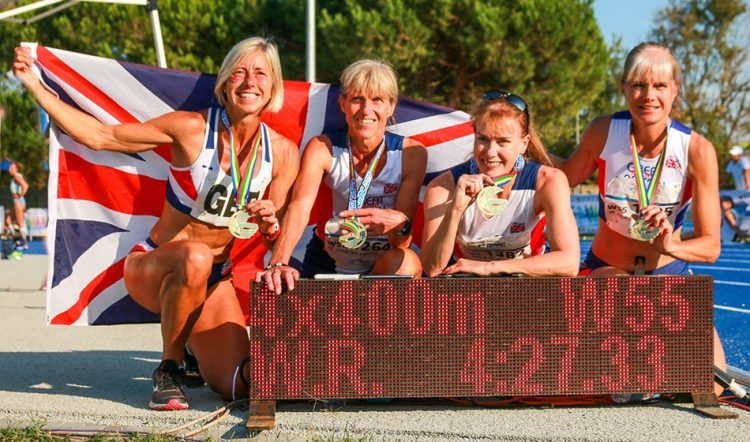 John Wright, who won the three individual M60 sprints, lost out on a medal in the relay when his team were disqualified for moving positions after the incoming runner had passed 200m. Germany won in 4:07.39.

The closest race of the day was unusually the M75s as Germany won again in 5:11.73 from Britain’s team of Victor Shirley (who won the 10km gold earlier in the day), Mel James, Anthony Treacher and Winston Laing, who ran 5:11.97.

Half of the winning 4x100m W40 team (Susie McCloughlin and Karen Burles) returned to run the longer relay alongside Becky Selvey and Sharon Dooley and they finished second in 4:15.86 behind Germany’s 4:10.83.

There were bronze medals for the M45 team (3:59.07) of Julian Ions, Ciaran Harvey, Nick Lauder and Samuel Nash.