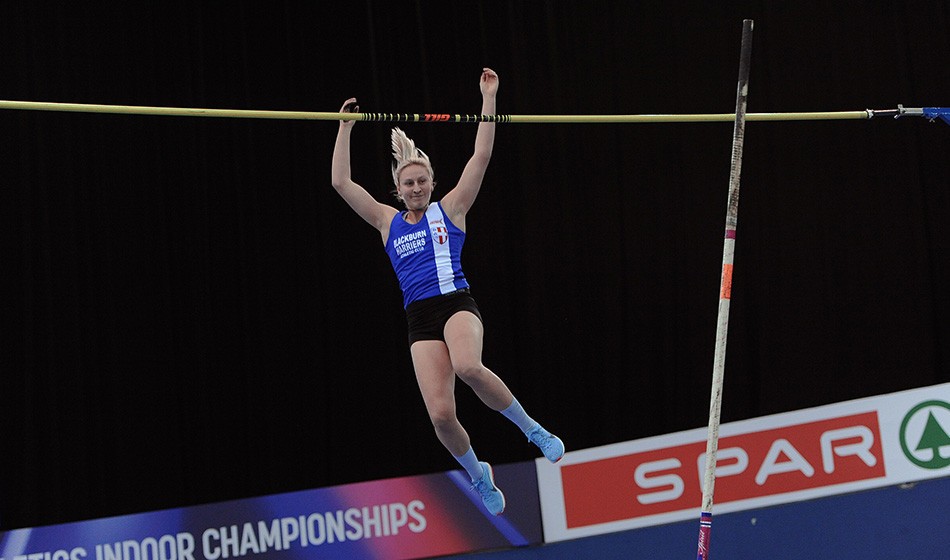 Holly Bradshaw showed she is line to challenge for a European indoor pole vault medal in Glasgow when she went second in the European rankings and third in the world when she cleared 4.80m in her first competition of 2019.

Her season’s debut in the pole vault at the Spar British Indoor Championships in Birmingham did not entirely go to plan as she failed her first chance at her opening height of 4.40m, but went clear at the second attempt which gave her the lead.

Bradshaw cleared 4.56m easily at her first attempt to nab the European indoor qualifying mark then also went clear at 4.66m and 4.72m with her first attempt. She then had two close attempts at 4.80m but went over at her last attempt.

It was her second best ever indoor jump plus equal third best indoors or out and represented a sensational season’s debut and she chose not to go higher.

Only Anzhelika Sidorova, who cleared 4.91m in Madrid the previous night, has jumped higher in 2019.

“I feel pretty shocked,” said Bradshaw. “My aim is the World Championships in Doha and I’m going off a slightly shorter approach so I didn’t think 4.80m was in my capability but to jump that is kind of crazy.

“I’ve got the Indoor Grand Prix in Birmingham next week and then I’ll head to Glasgow. These comps are about having fun and it’s going amazingly well.”

Any doubts that Laura Muir will have difficulty in defending her 3000m and 1500m titles were dispelled in the last 400m of the longer event. 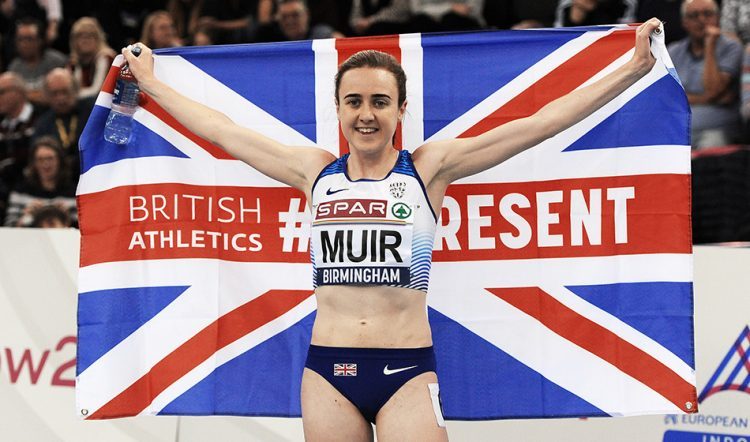 She said: “This will be the first time that I’ll be heading in as a defending champion at a European Championships and to wear the orange bib for two events is really exciting for me and I’m excited for the championships after that performance.

“I feel so comfortable indoors in Glasgow, I know the surroundings and I’m in great form. The timetable isn’t perfect but it works for me. I think the double double sounds pretty nice to me. If it was anywhere other than Glasgow, I might not have done it but it’s my hometown.

“To be able to go to the Europeans and not have the distraction of studying it gives me so much more flexibility and getting away for warm weather training twice has been huge for me.”

Naomi Ogbeta predictably won the triple jump but had to come from behind in round four.

Ogbeta won with her fourth round 14.05m, which gave her both a European indoor qualifier, a PB and a British under-23 indoor record.

Laura Samuel gave her a fight with a 13.51m season’s best in round three which she improved to 13.61m in the fifth round.

“I’m really happy and excited,” said Ogbeta. “I was hoping to be able to jump close to 14.00m indoors but to do that is a huge PB and I’m really excited by that.

“Having got the qualifying mark for outdoors, I’m chuffed to have been able to do it outright indoors. I think Laura really pushed me today and it gave me that motivation to jump further.” 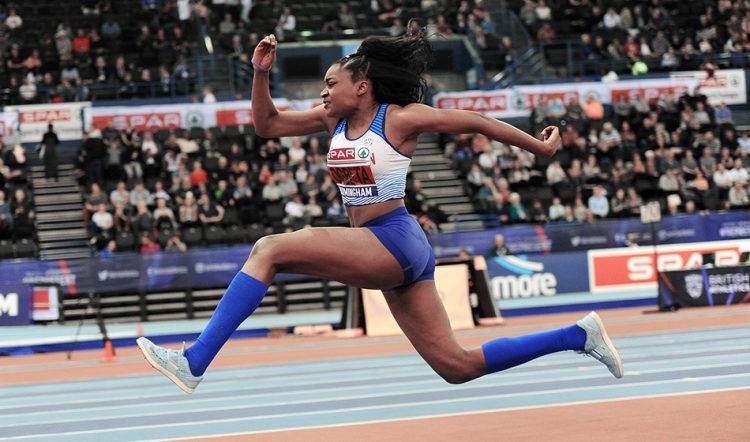 Alexandra Russell set a PB 13.27m to take the bronze.

Defending European indoor champion and this week’s Athletics Weekly cover star Asha Philip predictably won her 60m final but it was much closer than was anticipated after a technical problem caused a delay.

Rachel Miller was clearly ahead for much of the race but Philip finished strongly to win her sixth title in 7.19 with Miller again excelling to equal her PB with 7.20 as both sealed Glasgow selection. Kristal Awuah was third in 7.35.

In the semi-final Philip won easily in 7.22 from Awuah’s 7.32 with Miller winning her semi equally easily in 7.29.

She said: “I’m really happy because I had to work for that. None of my races are ever easy but I really had to dig in for that.

“It was a fight to the line and I’m really happy I came away with the gold. It’s a 10th indoor and outdoor title and it means so much to me. It was freezing downstairs when you’re waiting but when you come out to race the atmosphere was electric and it made it such a special race for me.”

Cindy Ofili showed she is gradually returning from her Achilles injury with a clear win in 8.16.

A metre back Katarina Johnson-Thompson was a clear second in an encouraging season’s best 8.27. Gabriella Ade-Onajobi set a PB 8.31 to take the bronze.

She said after the final: “It’s been a while because of my injury. My Achilles is getting back to normal. I felt really good and I am really happy to be British champion. The plan was always the Europeans so I am feeling really good but I need to get 8:10 so I will have to wait and see on what is next.”

Zoey Clark won her 400m semi-final impressively in an UK-leading 52.62 with Laviai Nielsen second in 52.79.

It’s lining up to be a cracking final on Sunday as Eilidh Doyle won the other semi-final in 52.76, having won her 400m heat in the previous UK-leading mark of 52.75.

18-year-old Amber Anning was second in a PB 53.32 to strengthen her hold on second spot in the all-time UK indoor under-20 rankings and is the fastest since former outdoor world record-holder Marilyn Neufville ran 53.01 to win Euro indoor gold in 1970.

The fastest runner in the 800m heats was 18-year-old Isabelle Boffey.