Five things we learned from Stockholm 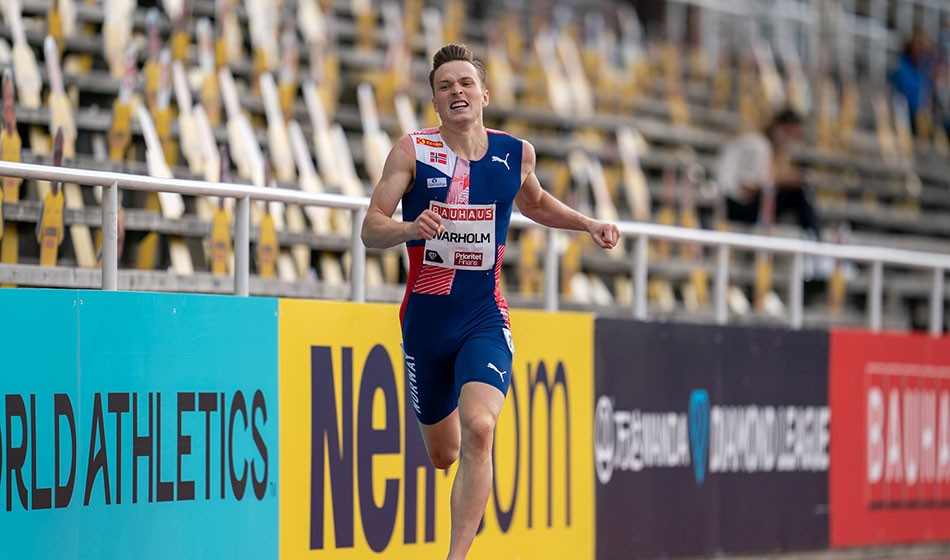 After another eventful Diamond League meeting, we look at some of the major talking points to emerge from the BAUHAUS-Galan

Karsten Warholm was highly impressive on the track again but it’s also his openly exuberant approach to the sport which sets him apart. At 24, he’s already a very different athlete to the one who screamed his way on to the global consciousness with his first world championship win in London. High expectations have followed the Norwegian ever since but he appears to revel in the attention, very often stoking his own flames with the aim of producing a higher level of performance.

There was no surprise when he came out on top of the world again in Doha last year and he has made no secret of aiming to take down Kevin Young’s 400m hurdles world record of 46.78, set back at the 1992 Olympics in Barcelona. At the Stockholm meeting Warholm came within one clipped hurdle of achieving that ambition, making contact with the final barrier yet still stretching every sinew to get to the line as quickly as possible. He did so in 46.87, the second-fastest time ever, to take 0.05 from his own European record and become the only man in history to have broken the 47-second barrier twice in the event.

At the point of hitting that hurdle and knowing it would cost valuable fractions of a second, there are others who would have eased off and waited for another day. Warholm, however, simply pushed himself harder in those closing metres and though he didn’t get the ultimate reward he was looking for on this occasion, that kind of approach is surely going to eventually lead him to an historic achievement. And soon.

The fact that he then threw himself into 400m action just over 90 minutes later – and won – also showed he’s clearly not one to dwell on what might have been.

“I hit that last hurdle because I went really hard for the first nine, and stuff like this happens,” said Warholm.

“I’m always telling myself to be a warrior when I go out on the track. I think I was rewarded by just going all in at the end and I got a great time. It’s a great lesson for me to always run until the finish line.”

Most athletics fans would accept that innovation has to be part of the sport’s future. We are going to need to move with the times and think differently in some respects or simply get left behind. When that ‘innovation’ only appears to cause anger and confusion, however, then there is a problem. It’s not a good sign, for example, when the winner of the long jump competition you are trying to reinvigorate says his own victory was unfair because of the new rules.

The beauty of athletics is the simple fact that it revolves around who runs the fastest and jumps the highest or, in this case, the furthest. Yet the ‘Final Three’ experiment, brought to the Diamond League for the first time on Sunday, went against that principle. All of the competitors jumped five times, with the top three then going into a ‘jump-off’ to decide the final standings. It was an idea which brought widespread criticism when it was trialled indoors earlier this year and brought outright anger from a number of athletes ahead of the weekend.

In practice, it caused more than a little head scratching. Thobias Montler leapt 8.13m twice – the longest jump of the day – in the early rounds but had to settle for second because his ‘Final Three’ attempt was 8.06m, short of Ruswahl Samaai’s 8.09m effort. Finn Kristian Pulli reached the jump-off with 8.02m but fouled his final jump.

On the women’s side, Khaddi Sagnia slipped to third place because of her closing jump of 5.73m, yet she had recorded the second-furthest leap of the day  – 6.83m – earlier. To the casual observer, athletics can be hard enough to follow and understand. Let’s not make it more difficult.

The BAUHAUS-Galan was a successful meeting for British athletes overall, with Holly Bradshaw and Adam Gemili both coming out on top in the pole vault and 200m respectively. When it came to the women’s middle distance events, however, there was outright UK domination.

Yes, there were some big name athletes missing for obvious reasons, but to see Laura Muir commandingly stride to victory in her first 1500m of the year and lead Laura Weightman and Melissa Courtney-Bryant to a British 1-2-3 provided significant encouragement.

After her injury problems of the winter, Muir looks to be just about back at full power again and a pressure-free season could prove to be of huge benefit to the European champion. Laura Weightman is another athlete who is making impressive progress, while Courtney-Bryant bit a sizeable chunk out of her personal best in Sweden.

Then there’s Muir’s training partner Jemma Reekie. Two European U23 titles showed there was serious talent there, but this has been the year in which the 22-year-old has taken huge strides forward and pulled up a seat at the top table. Her first Diamond League win – in the 800m – underlined that fact and to charge away from world silver medallist Raevyn Rogers in such a manner with that now recognisable finishing kick has only enhanced a fast-growing reputation.

4 Mondo is finding his rhythm again

There was a period during the indoor season when Mondo Duplantis looked as if he had the pole vault completely at his mercy. When he broke the world record twice within the space of a week, moving from 6.17m up to 6.18m, the European champion gave the impression that just about anything was possible.

The global events of this year halted all of that momentum, of course, and understandably it has taken a little while for the rust to be busted in an event which is all about rhythm and timing. Duplantis cleared 6.00m for the first time outdoors at the Diamond League meeting in Monaco and in Stockholm he officially only improved that world lead to 6.01m. The manner of his jumping, however, was very different.

Having comfortably gone over 6.01m, his next thought was to raise the bar to what would have been an outdoor record of 6.15m. He didn’t get there this time but that swagger and unashamed ambition is very clearly returning.

“I want to jump 6.15m. Nobody’s jumped higher than that outdoors,” he told World Athletics. “I want to be in that shape again to jump those high bars. I think a lot people thought that I couldn’t get back into world record shape this summer, and I want to show people that I can do it again.”

5 Brazier providing a masterclass from which Burgin can learn

Donavan Brazier recorded his 10th successive 800m victory, cruising out from the pack and engaging top gear just when he needed it to make sure he finished first in 1:43.76.

The American world champion, who broke the US record in Doha and has his sights set on David Rudisha’s world mark, is setting the two-lap standard for others to follow, and will have provided plenty of food for thought for one of his young opponents on Sunday.

Max Burgin had broken the British under-20 800m record a few days earlier and possesses a talent which is causing more than a ripple of excitement. The 18-year-old admitted he had hoped to come close to that personal best of 1:44.75 in Stockholm but was sixth this time in 1:46.02.

Brazier took time out afterwards to chat to the youngster for whom racing against and being around such esteemed company will have been invaluable. “The only way to learn is to do more of these types of races where you’re not the fastest, you’re in the pack, and I need to learn to race a bit more,” said Burgin.