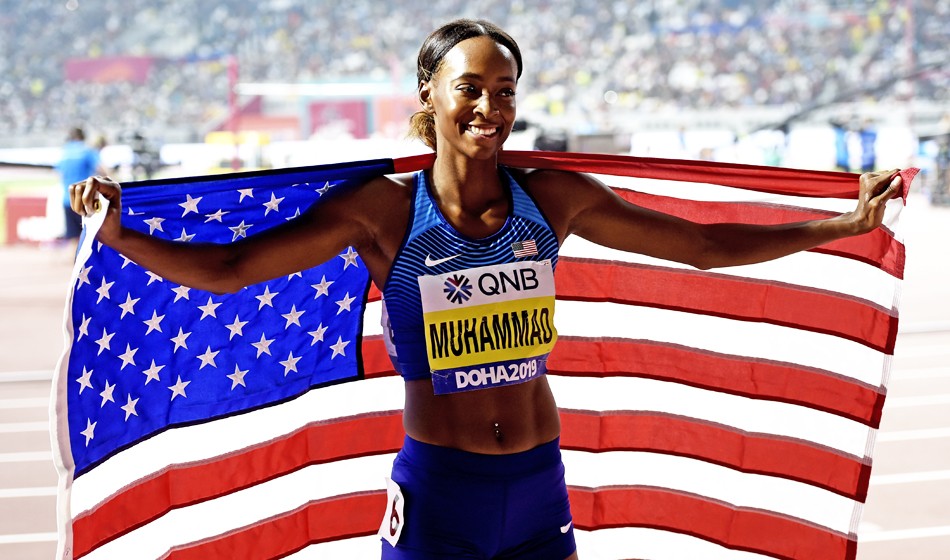 American changes history for a second time this year after clocking 52.16 in taking 400m hurdles gold ahead of young star Sydney McLaughlin

Breaking the world record once is impressive enough. Doing it for a second time in the same season, and becoming a world champion in the process, is downright extraordinary.

That is precisely what American Dalilah Muhammad achieved, however, when she lowered the 400m hurdles mark of 52.20 she set in winning the US Championships back in July, clocking 52.16 on the Khalifa Stadium track and rewriting the history books.

As in Des Moines, her closest challenger was young compatriot Sydney McLaughlin, who once again underlined her great potential with a personal best of 52.23 which ultimately helped drive her opponent to a stunning performance. Others were pulled towards fast times, as well – Jamaica’s Rushell Clayton also running a personal best in clocking 53.74 for bronze, while Lea Sprunger’s 54.06 in fourth was a Swiss record.

Muhammad set off full of intent, bursting out of the blocks, but world youth record holder McLaughlin was in hot pursuit and applying plenty of pressure down the back straight. The 29-year-old created what proved to be a crucial gap on the final bend, however, entering the finishing straight with clear daylight between her and her 20-year-old pursuer.

“I don’t think you ever get used to it but I know that if I want to stay competitive in this event then I have no choice (but to keep doing it),” says @DalilahMuhammad of her world record-breaking exploits #WorldAthleticsChampionships pic.twitter.com/qIqg5H1ZJ7

McLaughlin did start to close but still Muhammad would not buckle and burst through the line before the significance of the clock reading began to truly sink in.

“This means so much,” said Muhammad. “It’s difficult to describe. I just wanted the world title so much but to break the world record again is fantastic. I just decided to go for it from the start and I felt Sydney coming at me around hurdle nine, then I just gave it everything I’d got.

“It hasn’t really sunk in yet but it feels good. I did not expect to break the world record today, I was definitely just trying to win that race. Two world records, that sounds quite crazy, now that it is done.

“My coach told me that it is possible and I just had to go there and believe in it. I believe that we can drop under 52 seconds. The race was so tight, that was anybody’s race tonight. It was so close, we will continue to push each other. It is definitely possible.”

McLaughlin, who only turned professional at the end of last year, clearly has plenty of gold medal-winning moments in her own future.

“I am happy about today’ s performance because my goal was to come out and run around 53,” she said. “Just feeling this pace in the first 200, it felt already like the final. There are still things to work on but the bigger part of the race was just great.

“The little things I have to work on are the hurdle technique and the start but it is getting there. One thing I like about hurdles is that they distract me from the fact that I am running 400m. Just trying to focus on something different. It is fun to test the strength and to do the things I want.”