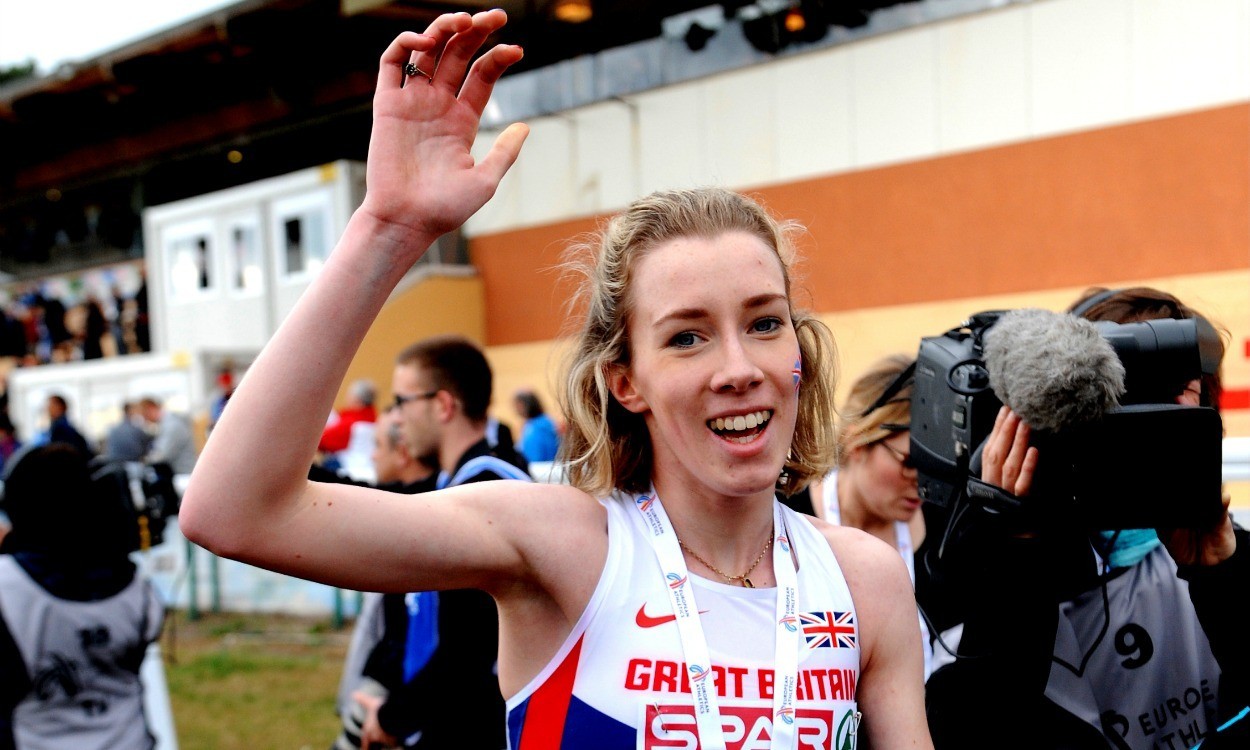 Harriet Knowles-Jones is keen to build on her Euro Cross silver and aim for the World Juniors, writes Emily Moss

Fresh from her European Cross silver in the junior race in Hyeres at the end of last year, 17-year-old Harriet Knowles-Jones now has her sights set on making the World Juniors – recently awarded to Bydgoszcz, Poland – and continuing to improve her times in 2016.

If running genes can play a role, the Warrington athlete, who placed fourth over 1500m at the IAAF World Youth Championships in Cali last summer, has everything going for her, as both her parents were successful athletes.

Her mum, Jayne (nee Spark), running for Altrincham, won the UK 1500m title in 1993 and represented Great Britain at the World Student Games and the World Cross Country Championships, boasting PBs of 4:12 and 9:06 for 1500m and 3000m respectively.

Her dad, Martin Jones, placed fourth over 10,000m in the Commonwealth Games in 1994 and was a world mountain running champion.

“My mum used to train with me in the running buggy,” explains Harriet. “As I got older, I would play on the playground while she trained round the local park or play in the long jump pit while she did a track session. I couldn’t wait to run myself!”

Jayne adds: “I also remember winning the Northern Cross country and standing on the podium holding Harriet, who was only nine months old. Maybe she got a taste for it from that early age!”

Jayne has also passed on her lucky mascot to her daughter. “Henry Hippo has travelled with me to Ireland, Spain, France, Belgium and South America,” says Harriet.

Until recently, Jayne used to accompany Harriet on training runs and Harriet is quick to credit both her mum and her stepdad, Paul. “My mum has always been a big inspiration to me. She has always encouraged and motivated me,” she said.

“She used to run with me up until this year when a sore Achilles has forced her to cycle round our training routes instead. My stepdad also plays an integral part, taking me training and being there to support at every race.”

Although she is yet to beat her mum’s times, Jayne believes it is only a matter of time. “I know that Harriet will better my PBs and she has already surpassed my achievements,” she says. “She is much better at coping with the pressures of athletics than I ever was and she has a confidence and belief in herself that you need to succeed. Running really does make Harriet happy and she works so well with Paul Roden (her coach). He really understands how she thinks and what works best for her.”

“I was really pleased with my performance in Cali and it was a very valuable experience going through heats and competing in the final and it taught me a lot about adapting to the hot conditions, coping with the time difference and altitude. I love putting on the GB kit”

Harriet has been a familiar face on the podium at national championships in recent years, but she was bitterly disappointed to miss out on the European and World Cross Country last winter.

“I under performed at Liverpool so missed the Europeans,” she says. “Later in the season, I missed out on taking up my place for the World Cross in China as, despite finishing second in the trial race, I was disqualified for having forgotten to wear my timing chip. When the selectors did ask me to join the team, I couldn’t get a visa to travel to China. However, winning the National was probably my favourite cross-country win as I had previously won a silver and bronze. It was tough and muddy at Parliament Hill and I really enjoyed the whole day.”

With the cross-country disappointments firmly behind her, Harriet made amends on the track, finishing fourth globally in her age group over 1500m in Cali. However, it had not all been plain-sailing, as she had started the season slowly due to an iron deficiency, which meant she had to chase qualification times and consequently was not able to race as many 800s and 3000s as she would have liked.

However, Harriet thoroughly enjoyed what was her first GB representation on the track, having already run for her country at the Edinburgh Cross Country in 2014 and 2015. “I was really pleased with my performance in Cali and it was a very valuable experience going through heats and competing in the final and it taught me a lot about adapting to the hot conditions, coping with the time difference and altitude. I love putting on the GB kit,” says Harriet.

The ambitious youngster has gone from strength to strength since, finishing runner- up in both the European Cross Country trials at Liverpool and in the European event itself. Reflecting on the Europeans, Harriet says: “It was lovely that my parents and grandparents were there to share the moment. I couldn’t believe it when I found myself in the lead on the finishing straight.

“I just didn’t have the legs when the German athlete flew past me at the end, but there is something for me to work on with my coach.”

Having been coached by Russell Tart since she started in the sport aged eight, Harriet moved to train with Roden earlier this year and she is full of praise for her new set-up, while quick to acknowledge the important part Tart played.

“Russ and I decided that I needed some more competition in sessions and Paul’s group is an ideal set up for me,” she says. “It is a mixed group and there are always athletes around me to work with in training sets. Paul gives up so much time to coach us. I really enjoy the sessions and feel motivated and encouraged by all those around me.”

However, in addition to the training, Harriet says she was also able to enjoy some more of her hobbies through being a member of Tart’s squad. “Russ used to have an athletics bake off competition each season, so there were often cakes or tray bakes after training sessions. This was fantastic for me, as outside athletics baking and cake decorating is one of my hobbies,” she explains.

Currently studying for A-Levels at Loreto Grammar School in Altrincham, Harriet hopes to study medicine at university next year and would love to be a GB team doctor in the future.

Although clearly a massive talent who not only has the genes, talent and work ethic to succeed but also has a smart head on her shoulders, she knows how difficult it would be to make it to the very top, because her eldest sister went to the European Juniors for swimming before she was forced out of the sport with an injury.

Harriet says: “I would love to go on and achieve at a big championship, but I am really grateful for the opportunities and success I have experienced so far. Seeing my eldest sister struggle through years of injury and finally stepping out of her sport makes me really appreciative of every moment I am in the sport that I love.”

You can find further performance stats on Harriet on Power of 10 here.