British women thrive on the country at Euro Masters 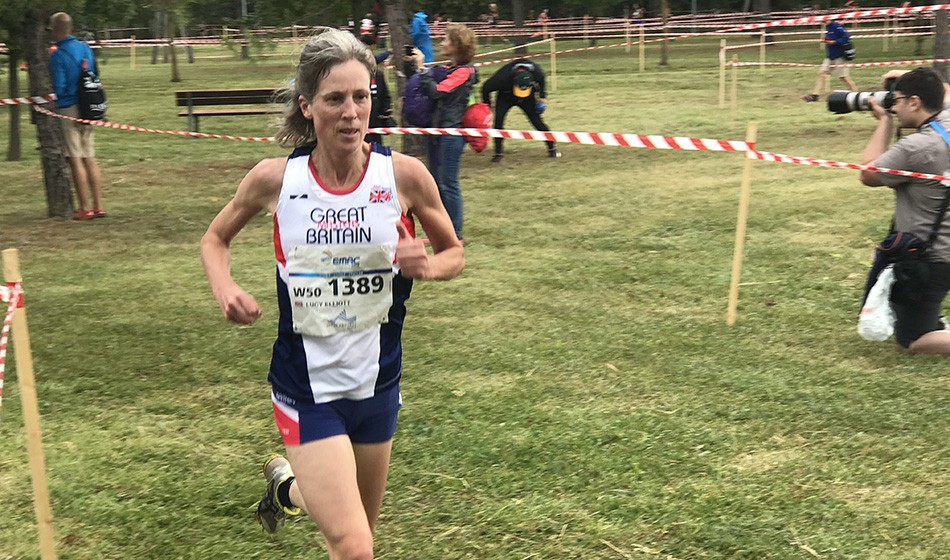 British cross-country runners failed to quite match the domination that the 1500m runners demonstrated on Saturday at the European Masters Championships but the women still enjoyed success on a twisting but mostly flat if uneven course at Caorle held over just 4km.

First off was the W55-W80 races which started in heavy rain and a thunderstorm – weather conditions that caused some mid-afternoon events to be cancelled.

After a careful start following her 1500m win of the night before, Clare Elms eased away halfway around the first of two laps and won easily in 14:33 from Austria’s Sabine Hofer (14:57) and Spain’s Esther Pedrosa (15:00), losing her silver medal streak behind the Briton which she had done in all her previous major championships this year.

Elms picked up her third gold by being in the winning team along with Christine Anthony who was fourth (15:40) and Jane Pidgeon (15:55) sixth.

The event also included the W60 race and that was won by the great Rosa Mota, 37 years after she first took a European title in Athens which was then the very first international marathon championship.

Still enjoying her running, the 1987 world and 1988 Olympic champion, was persuaded to compete by some fellow Portuguese masters and enjoyed her first taste of masters competition and runs the 10km next weekend.

Entered as Correia Dos Santos Mota, few realised it was the all-time great who won on the same day as the Great North Run – a race which she won in 1985 and 1990. Mota (pictured below) ran 15:14 to beat Ireland’s Pauline Moran by 12 seconds. 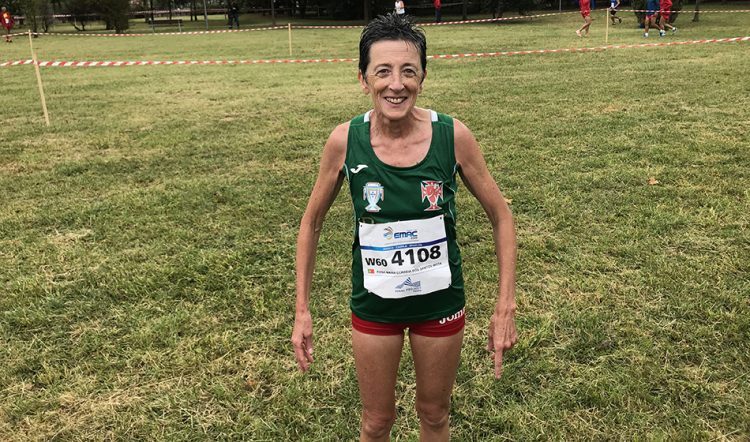 In the W35 to W50 race that followed in better conditions, Lucy Elliott (main image, above) provided the highlight winning her race in style just behind the leading W35s.

Like her Hampshire colleague Yule, she went two places better than the 1500m. Her time was 13:50 and she won by 18 seconds from Agnes Schipper of the Netherlands (14:08) and her run led Britain to team gold too.

Apart from the W50 and W55 team gold, the W35s finished second to Spain and the W65s and W70s were both second to Germany.

British men found medals harder to come by on the country. Richard Pitcairn-Knowles won a M85 bronze in 28:44 while the M60 team took silver behind Italy and the M70 bronzes as Italy won again there.

Luigi del Buono of the home nation ran the fastest time overall in winning the M40 gold in 11:44 to cap a good day for the hosts with 10 titles in both men and women’s events. Germany won the two oldest men’s and women’s categories and Britain were the third most successful team with two golds and five minor medals.

The 10,000m men’s races were also held on the day in Eraclea and the races took up over 10 hours although numbers were down due to the rather peculiar clash with the cross-country.

For most of the day it looked like it was going to be a barren time for Britain. However, luckily the last two races – the M55 and combined M60/65 race proved fruitful.

In his first major track championships, Andrew Leach decimated the field in the M55 race. Through halfway in 16:38.0, he ran 33:33.04, to win by over a minute from Franco Torresani of Italy.

In the field, Guy Dirkin won a British bronze in the M65 weight with 15.45m in an event won by Vasileos Manganas of Greece in 17.48m.

The decathlon has proved tough for British medals but Adrian Essex gained silver in the M65 event with 5823 points as he lacked the throwing power of Finland’s Markku Rautasalo, who won with 5873 points.

Penny Butcher won bronze in the W60 heptathlon with 4770 points as Wiebke Baseda won with 5529 points.