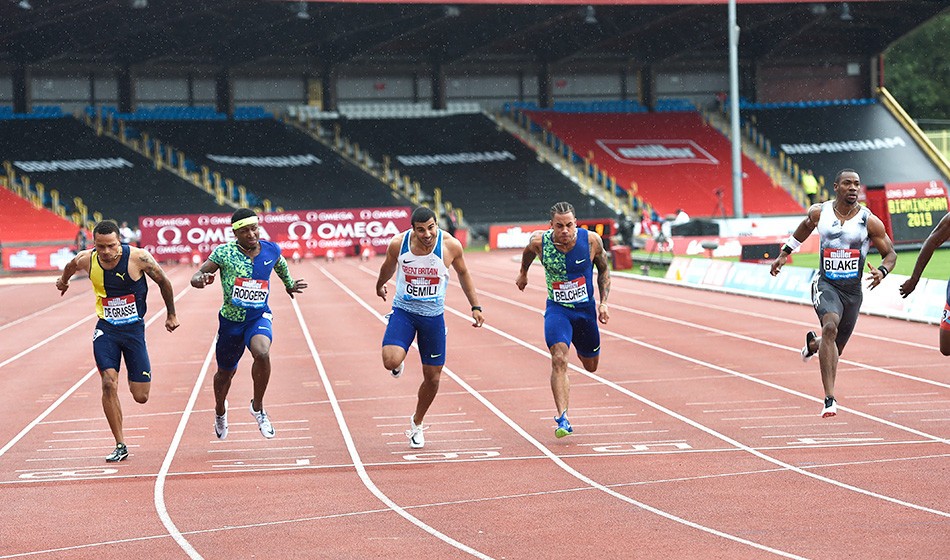 It took a photo finish to separate Yohan Blake and Adam Gemili in the 100m, but both men left the Alexander Stadium in good spirits and knowing their countdown to Doha is on track. Blake, the 2011 world champion, was given the verdict as each athlete shared the same time of 10.07. Runner-up Gemili was happy, though, as he continues his comeback from hamstring problems.

“It was good, it was coming,” said Blake. “The weather wasn’t great but I’m saving the big day for the World Championships and the Diamond League finals in Zurich.”

Gemili said: “It wasn’t my best start but I’m just so happy to be healthy and back up running. It’s good to be in the mix with some of the best sprinters in the world.

“To win my heat and finish second in the Diamond League race, it bodes well for the British Champs and hopefully I can make the team for Doha.  I’ve put a lot of training in this winter and I’m healthy finally.”

After his runner-up finish in yesterday’s @BirminghamDL 100m in 10.07 – the same time as winner Yohan Blake – Adam Gemili was asked which event – the 100 or 200 – is now his favourite… #BirminghamDL pic.twitter.com/6yGBryKzaZ

The men’s 800m saw a number of top domestic runners going head to head one week before the British Championships. An English man won, but it was Mark English from Ireland who timed his kick to perfection to run 1:45.94 to beat Kenya’s 1:42 man Alfred Kipketer.

Close behind, Elliot Giles won the battle of the Brits as he clocked 1:46.27 ahead of Jamie Webb, Guy Learmonth and Spencer Thomas.

.@ElliotLeviGiles gives his thoughts on yesterday’s @BirminghamDL 800m, which came down to the kick. He finished top Brit in third in 1:46.27. pic.twitter.com/QJU812c7yb

In a rare race in the UK, Colorado-based Thomas Staines misjudged his effort and finished eighth, while UK junior record-holder Max Burgin found the early pace of 50.6 at the bell too hot and the 17-year-old will now make a decision over whether to tackle the British Championships back in Birmingham next weekend.

Max Burgin, the 17-year-old UK U20 record-holder, talks to @Jason_AW about his “baptism of fire” in yesterday’s @BirminghamDL 800m where he was disappointed with his 1:47.99 for 10th. It was his first race since June and missing the Euro U20 Champs through injury #BirminghamDL pic.twitter.com/PS7DS6SA7Z

Cheng Chao-tsun, the Asian record-holder from Chinese Taipei, caused a mild upset to take the men’s javelin with 87.75m from Jakub Vadlejch of the Czech Republic as Magnus Kirt, the 2019 world No.1 from Estonia, was third, German duo Andreas Hofmann and Thomas Rohler fourth and seventh, while London Olympics winner Keshorn Walcott of Trinidad & Tobago was last.

Akeem Bloomfield of Jamaica took the men’s 400m in 45.04 as local star Matt Hudson-Smith ran a decent 45.55 in third. It was the European champion’s first race for almost a year due to what he described a ‘career threatening injury’ sustained in the spring. But he is back on track for the British Championships and confident of getting back inside 45 seconds in Doha.

“It’s always good to be home,” said the Florida-based and Birmingham-born athlete. “I put on a good showing and it’s nice to do that. Now it’s on to the trials.”

At the start of the afternoon the European champion Thomas Young, 19, continued his build up to the World Para Athletics Championships in Dubai by winning the T35-38 100m in 11.37 (1.4m/sec).

» Read about the women’s events in Birmingham on Sunday here

» More in the August 22 issue of AW magazine