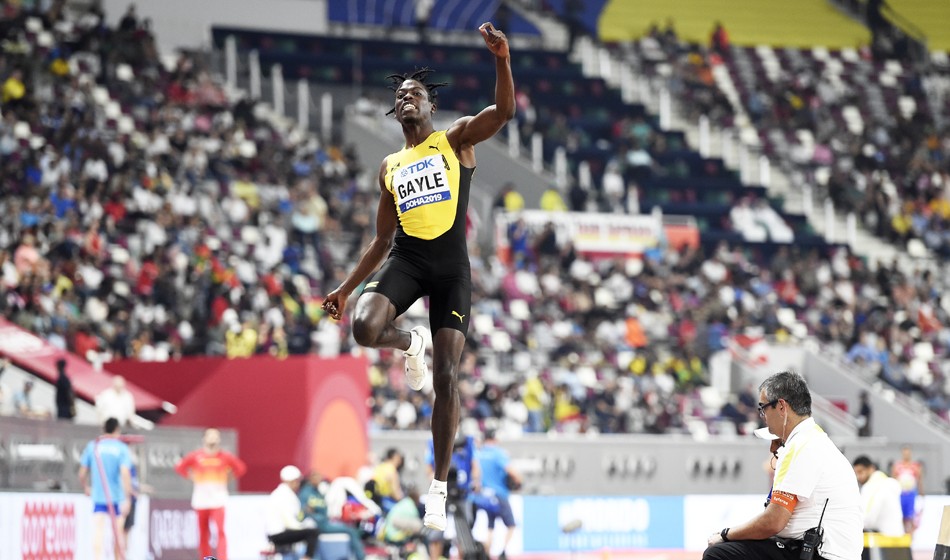 Tajay Gayle rose to the occasion in spectacular style to win the men’s long jump title with the biggest leap for a decade and the 10th furthest in history.

The 23-year-old is an early contender for biggest surprise winner of the IAAF World Championships in Doha as he improved his best from 8.32m to 8.69m to smash James Beckford’s long-standing Jamaican record by 7cm.

Gayle set his stall out with an 8.46m first round effort but jumped 8.69m (0.5m/sec) in the fourth round as Jeff Henderson, the Olympic champion from the United States, finished runner-up with 8.39m (-0.1m/sec), while Juan Miguel Echevarria of Cuba took bronze with 8.34m (0.1m/sec).

Twenty-four hours earlier the winner only squeezed into the final as the 12th best qualifier with 7.89m. “Yesterday I made some mistakes and I went back to the drawing board,” he said, explaining how he turned things around. “On the runway … I just ran faster!”

It was the best legal long jump mark since four-time world champion Dwight Phillips’ 8.74m in 2009.

Of the many stunning statistics relating to his achievement, which was he most pleased with? “The personal best,” he said simply, before adding after a pause: “And the gold medal.”

Silver medallist Henderson said: “I wasn’t supposed to be here,” as he explained he’d planned to have a quiet year ahead of a more committed Olympic campaign.

Echevarria had led the qualifiers but was in good spirits after the competition despite losing gold. “Even though they beat me they are my colleagues and I’m not mad,” he said through a translator.

“I’m happy that I was able to make it on to the podium,” added Echevarria, who also saw Gayle pass him on the all-time rankings by 1cm.

World No.1 Daniel Stahl led the men’s discus qualifiers with 67.88m and in Monday’s final the giant Swedish thrower will be going for gold after missing out on the title by just 2cm in 2017 to Andrius Gudžius.

Olympic champion Christoph Harting went out, though, as the German finished 14th with 63.08m.

World record-holder Renaud Lavillenie went out in pole vault qualifying at 5.60m but he wasn’t the only big name to exit. Paweł Wojciechowski, the 2011 world champion and reigning European indoor champion, cleared only 5.70, while British hope Harry Coppell wasn’t even able to take a vault after aggravating a hip injury during warm up.

“It is devastating,” said Coppell. “I was hoping that I could come in and do myself justice and I haven’t done that. I did a couple of jumps in warm up and if I had continued in the competition it would have just been dangerous. I would have come away with worse than what I have now and it just wasn’t worth it. I’ll come back stronger for it.”