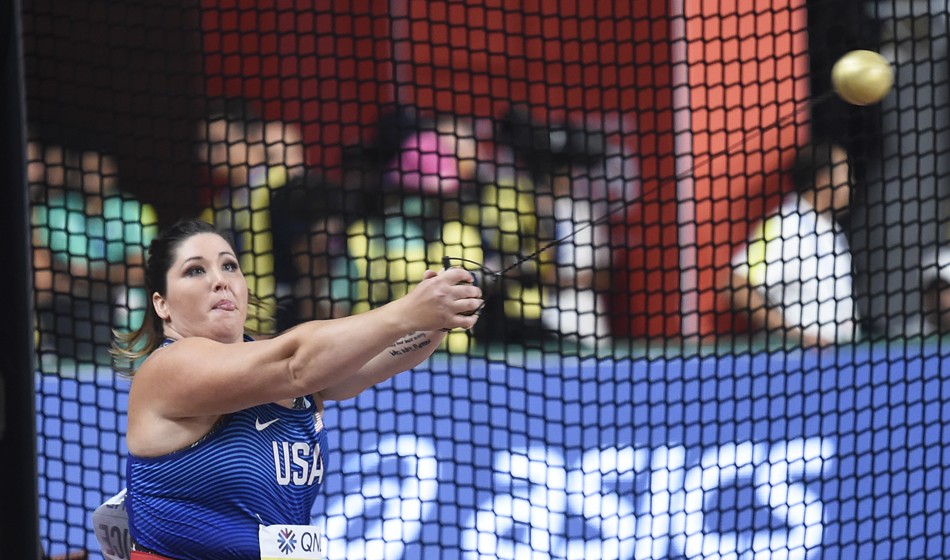 DeAnna Price became the first American woman to win a world outdoor throws title after sealing hammer gold with a 77.54m effort. The 26-year-old dropped to her knees at the end of the contest, broke into tears, hugged runner-up Joanna Fiodorow of Poland and draped the US flag around her shoulders.

Price led the world rankings coming into the championships with a North American record of 78.24m, but she says her form dipped drastically earlier in the year to the extent she was even thinking of quitting.

“All my numbers dropped in training,” she said. “I thought ‘do I keep going til Tokyo 2020 or do I retire?’ There was a lot of crying and pain. But myself and my husband (and coach) decided to keep going.”

She is now glad she continued and she hopes her victory will send a message to female throwers that “women can be strong and beautiful”.

Talking openly about her see-sawing weight, Price explained she was an 800m runner who weighed 145lb at school and a talented softball player in Missouri. She ballooned to 275lb and, she remembers, “I was really big and couldn’t move fast”.

But inspired by the Scottish hammer coach Stewart Togher, who deliberately cajoled her with taunts of ‘you’re too fat’, she found herself haunted by his friendly jibes and trimmed to 228lb and her performances improved as she finished ninth at Rio 2016 and eighth in London 2017.

“I did track and field to stay in shape for softball originally,” she remembers. “I got handed a hammer aged 16 and didn’t even know what it was.

“First time I used it I accidentally hit myself on the head with the handle and dropped it and said, ‘I’m never using this again’. But softball was taken out of the Olympics so I thought I’d take this track and field thing a go.”

On her ‘strong and beautiful’ message, she added: “You can have the best of both worlds. I’ve been strong, I’ve been smaller and I’ve been bigger. I’ve had all sides.”

Rarely have three medallists at a global championship shown such friendliness toward each other either. Fiodorow was delighted with her PB of 76.35m, while Zheng Wang of China was also happy with bronze after throwing 74.76m and the trio were all smiles in their press conference.

“Silver and a PB but maybe next time it’s going to be better,” Fiodorow smiled as she threw down a good-natured challenge to Price.

“This is like a family,” said Wang. “The other girls are so friendly and happy. I don’t feel nervous when we compete because the environment is so good.”

The contest for Olympic medals will not be easy, though, as world record-holder Anita Wlodarczyk is expected to return after a knee injury kept her out of this championship. Wlodarczyk is working for television in Doha and Fiodorow said: “I am sure she will come back well next year to defend her Olympic title.”