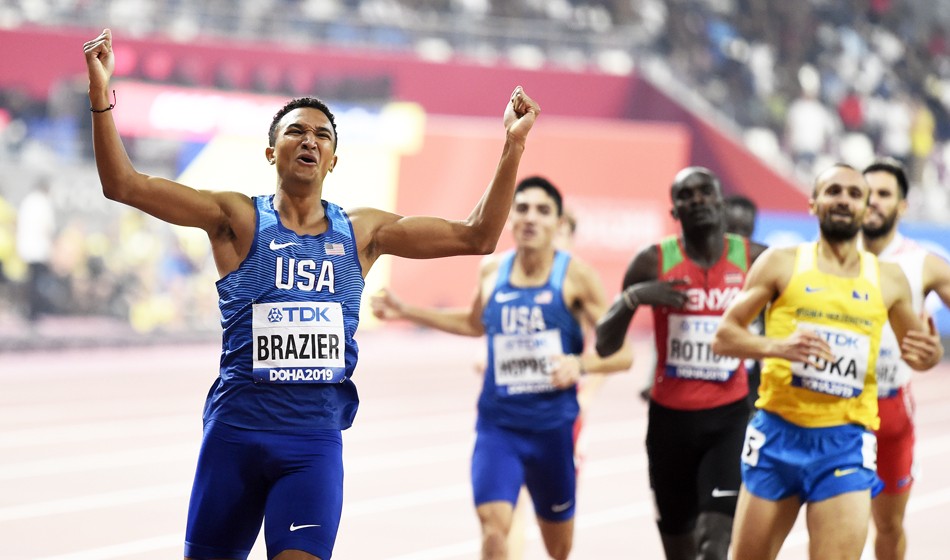 With 1:42.34 Donavan Brazier smashed Johnny Gray’s 34-year-old American record and Billy Konchellah’s 32-year-old championship record. The man from Michigan also registered the biggest winning margin in the event’s history at the world championships. So was it the perfect race?

“Yes, not sure what else I could have done better tactically,” the 22-year-old said. “When I made a move there was no looking back from there.”

Runner-up Amel Tuka won Bosnia and Herzegovina’s best medal at the world championships with silver in 1:43.47 with Ferguson Cheruiyot Rotich of Kenya third in 1:43.82, American Bryce Hoppel fourth in 1:44.25 and Puerto Rico’s Wesley Vasquez fifth in 1:44.48.

In trademark style Vasquez blasted into the lead, passing 200m in 23.61 with Brazier the only athlete to fully commit to going with him.

Coming into the home straight for the first time, Adrian Ben of Spain was already tailed off at the back, although he later rallied to move up to sixth.

Going through the bell in a fast 48.96, Vasquez looked strong but Brazier made his move down the back straight, cruising smoothly past with 250m to go as Vasquez began to tighten up.

Behind, the fast-finishing Tuka had been a few metres behind the leading duo at the bell in third place but on the last bend he caught the fading Vasquez as Brazier, who had gone through 600m in 76.18, extended his lead in pole position.

Entering the home straight Tuka surged past Vasquez but there was no catching Brazier who held his form to win by an emphatic 1.13 seconds as Gray’s US record of 1:42.60 and Konchellah’s 1:43.04 championship best fell.

“Going through the bell that fast is nerve wracking,” said Brazier. “I’ve only broken 50 one time before on a first lap and I locked up like crazy. But I had the confidence to go through that fast here and to see it come together strategically at such a late world champs is very rewarding.”

Brazier ran a PB of 1:42.70 on the eve of the championships to win in Zurich and is coached by Pete Julian from the Nike Oregon Project. With the news of Alberto Salazar’s four-year anti-doping ban breaking on the eve of Brazier’s final, the athlete was asked about it post-race but he stressed he is coached by Julian and has little to do with Salazar.

Donavan Brazier says he was unaware of the investigation into Alberto Salazar when he joined the Nike Oregon Project. The 800m runner stresses that he's coached by Pete Julian and has little do with Salazar. "The investigation started when I was still at high school," he says. pic.twitter.com/hUhZd76hm8

Brazier said it would be “ignorant” if anyone tarnished his victory by linking it with Salazar. “I’m coached by Pete Julian,” he stressed. “The investigation (into the Nike Oregon Project) started when I was still at high school and I didn’t even know what the Oregon Project was at the time.

“I joined the group early summer 2018. From start I was in contact with Pete and have never been asked to be coached by Alberto. I didn’t even know there was an investigation on and I still don’t know 100% what’s going on with the investigation.

“I just woke up to a text saying the founder of the Oregon Project, Alberto Salazar, had a four-year ban. I don’t know even what it means to the Nike Oregon Project.”

He was only seventh in his steeplechase heat but Zak Seddon produced a few noteworthy facts.

His 8:22.51 was the fastest by a Briton in the World Championships since Roger Hackney 32 years ago and he became the first finalist since Tom Hanlon in 1993.

Only three got through in each heat by position with six places available by time. With Seddon only fourth best for time qualification, it meant no more than two could qualify in the other two races but that’s what happened. Lamecha Girma won heat two in 8:16.64 with fourth at 8:18.66 and fifth at 8:23.08 and the final heat was won by defending champion Conseslus Kipruto in 8:19.20 with fourth at 8:21.09 and fifth at 8:23.99 so the Briton qualified by half a second.