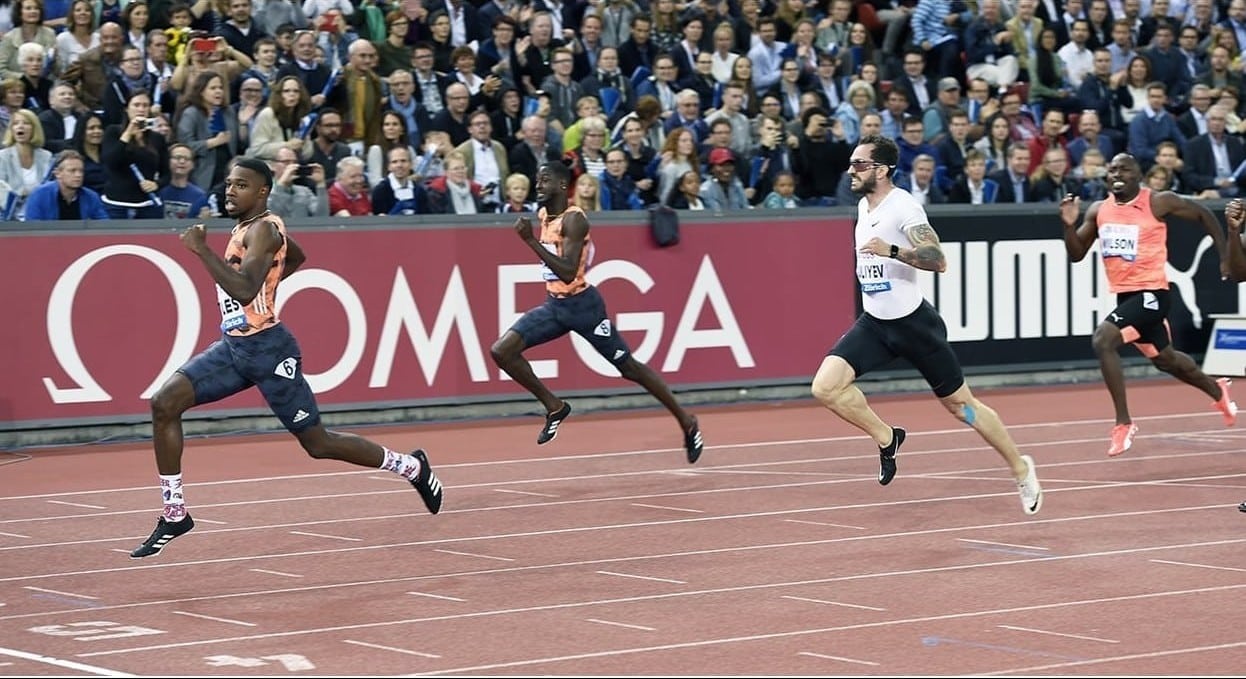 On a night when big-money Diamond League prizes were at stake, the first of two 2018 series finals saw Noah Lyles in dazzling form as he destroyed his rivals over 200m.

The 21-year-old American streaked away from European champion Ramil Guliyev to run 19.67 into a slight headwind as he finished just one hundredth of a second outside Usain Bolt’s meeting record. “I came here to go for the win,” said Lyles. “I did it and am very happy.”

The Weltklasse in Zurich is often called the two-hour Olympics. This is because it traditionally produces some of the best action of the summer and this year’s edition did not disappoint.

The most exciting race of the meeting on Thursday in the Swiss city came in the men’s 3000m steeplechase. Here, Conseslus Kipruto, the Olympic and world champion from Kenya, lost his left shoe in the opening couple of laps but kept his composure and in a thrilling finish with Soufiane El Bakkali ran down the Moroccan in the home straight to cross the line four hundredths of a second ahead in 8:10.15.

“I am injured because I lost my left shoe,” said Kipruto, who won his fourth Diamond League trophy. “That was a mess. But it motivated me to fight as hard as I could.”

Away from the track, two of the highest-quality performances of the day came in the men’s throws. Firstly came Tom Walsh, who was in imperious form as he won the men’s shot with a Diamond League and 30-year-old meeting record of 22.60m. The New Zealander fought off tough competition as US duo Darrell Hill and Ryan Crouser threw 22.40m and 22.18m.

Later in the evening, Andreas Hofmann (below) dominated a top-class men’s javelin field with a big 91.44m throw in the third round. 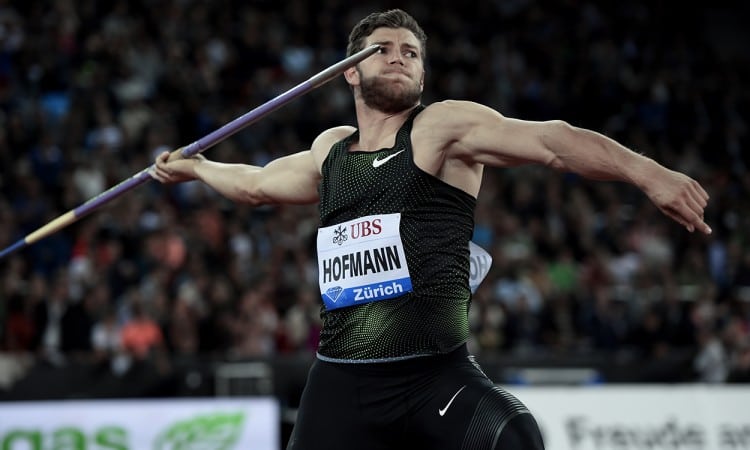 Caster Semenya was a class apart in the women’s 800m. The South African missed the last Diamond League in Birmingham after falling ill after the African Championships but in Zurich she cruised through 400m in 56 seconds before coming home unchallenged in 1:55.27 as Ajee Wilson of the United States was runner-up in 1:57.86.

Caterine Ibarguen has returned to winning ways in 2018, albeit in the absence of world champion Yulimar Rojas, and the Colombian took triple jump victory in Zurich although it came via the smallest of margins.

Ibarguen leaped 14.56m but Shanieka Ricketts’ best was just one centimetre behind. Still, it was enough to give Ibarguen her fifth Diamond League trophy – and she now competes in the long jump in Brussels on Friday night.

Another hot favourite to win in the jumps was Mariya Lasitskene and the Russian athlete eased to victory with a 1.97m clearance as Yuliya Levchenko finished second with 1.94m.

The height of 1.90m proved a stumbling block for many of the field and Britain’s Morgan Lake was among those as she exited with a best of 1.85m.

In the women’s 100m the European champion Dina Asher-Smith was up against Marie-Josée Ta Lou – an Ivory Coast sprinter who has been unbeaten at the distance all year. But it was another Ivory Coast athlete who was fastest on the night as Murielle Ahouré blasted to an 11.01 victory into a slight headwind as Asher-Smith ran 11.08 to edge out Ta Lou by two hundredths of a second as the Briton claimed the runner-up spot.

10m lead at half-way… but no pacemaker, no problem!

It's the Semenya Show! ? pic.twitter.com/W5MRqtNew6

Later, Asher-Smith returned to anchor the British 4x100m team, though, and with a brilliant anchor leg she made up a significant deficit on the leaders, Switzerland, to win in 42.28 after team-mates Asha Philip, Imani-Lara Lansiquot and Bianca Williams had run the first three legs.

Salomé Kora ran the final leg for Switzerland and said: “It was not so nice to be overtaken on the last metres. But being overtaken by the European champion Asher-Smith is not the end of the world for me. She is running on another level.”

For the pole vaulters, the weather was much better than it was in Birmingham recently. Katerina Stefanidi (below) took advantage of the still conditions as she cleared 4.87m to win as Sandi Morris cleared 4.82m for second and Holly Bradshaw finished fourth equal with 4.57m. 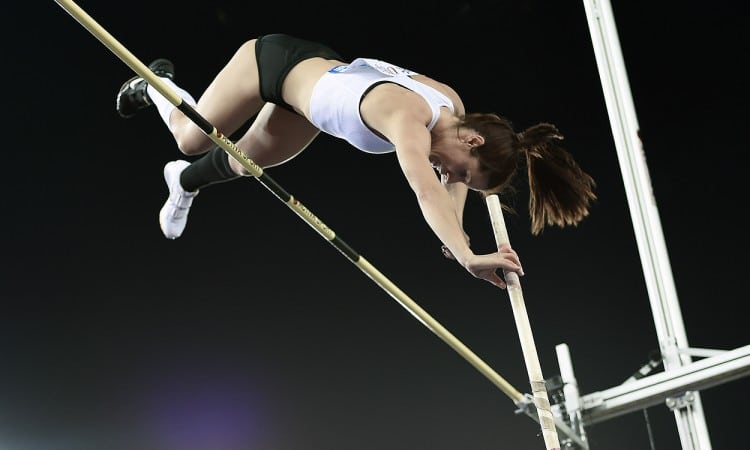 There was a US one-two in the men’s 400m as Fred Kerley clocked 44.80 from Nathan Strother’s 44.93 with Britain’s Matt Hudson-Smith a close third with 44.95, while Steven Gardiner of Bahamas pulled up injured in home straight.

The men’s 1500m, meanwhile, saw Timothy Cheruiyot cruising away from his rivals in the closing stages to clock 3:30.27 as fellow Kenyan Elijah Manangoi faded in the home straight but held on for second with 3:31.16 as Charlie Da’Vall Grice wound up 11th in 3:40.06.

In non-Diamond League 100m races, there was a win for Imani-Lara Lansiquot as the Briton clocked 11.36 into a slight headwind.

The meeting ended with two of the closest contests of the day. Luvo Manyonga was tied with fellow South African Ruswahl Samaai with 8.32m for much of the men’s long jump but world champion Manyonga uncorked an 8.36m final round leap to win by 4cm.

Then, in the men’s 400m hurdles, Kyron McMaster of the British Virgin Islands showed great form after an injury-hit year to beat European champion Karsten Warholm – 48.08 to 48.10.

The Diamond League finals now move to Brussels but the women’s shot at the Belgian meeting took place on Thursday, 24 hours before the rest of the Memorial Van Damme action, with world champion Gong Lijiao winning with 19.84m. Fresh from victory in the Asian Games in Jakarta, Gong beat Raven Saunders’ 19.64m and Christina Schwanitz’s 19.50m.

» Full coverage in the September 6 issue of AW