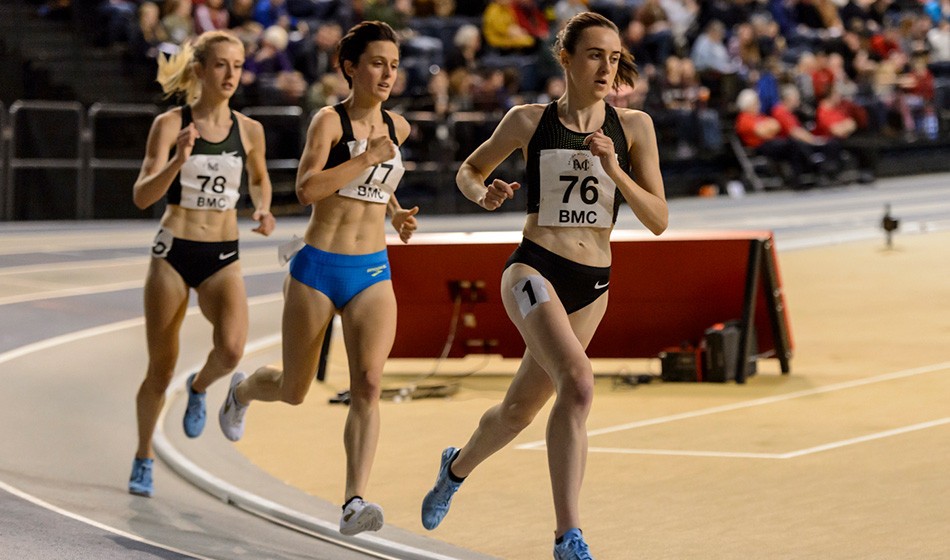 Laura Muir insisted she is excited about what lies ahead in 2019 following an indoor 5000m win at the GAA Miler Meet in Glasgow which opened her racing year and confirmed she is “where I need to be” in terms of her fitness.

The double European indoor champion, paced by international triathlete Beth Potter through 3000m, clocked 14:52.02 in holding off the attentions of training partner Gabriela Stafford, who obliterated the Canadian record by almost 30 seconds, coming home in 14:57.45.

Having gone through the 3000m mark in 9:02, Muir went on her customary solo charge for the line. Though there were to be no record-breaking exploits this time – she broke the British mark with a time of 14:49.12 at this meeting in January 2017 – the 25-year-old’s satisfaction was clear after her victory on the Emirates Arena track which will host the European Indoor Championships in March.

“I’m really happy,” said Muir. “I think I did the last 2km more or less identically to the time when I ran the (5000m) record because we went through 3000m three seconds slower (than when the record was broken). 2017 was when I was running lots of European records so the fact that I’m in very similar shape to then is really good.”

Muir admitted that her exhaustion at the end of a year which saw her complete her veterinary degree, as well as secure two world indoor medals and the European 1500m title in Berlin, meant she was perhaps a little sluggish when she got back into training.

However, she added: “But we went to South Africa, I got really, really fit, I trained really hard over Christmas time and I knew I was in a good place coming in here. I’m where I need to be now, which is the important thing.”

And has she felt a difference, without having to worry about her studies alongside her athletics?

“I think I’m just feeling a lot more relaxed and less stressed, which is nice, plus I’m sleeping lots,” she said. “The recovery side of things is much improved. We’ve kept the training similar because it’s worked in the past but it’s just nice to have a bit more time and to be more relaxed.”

Muir has yet to decide which of her 1500m 0r 3000m European indoor titles she will defend in Glasgow, but there is an undeniable confidence – particularly given that she trains regularly at the championships venue.

“It’s exciting to know that I’m in almost exactly the same shape as I was in 2017,” she said. “It’s nice to not be in the unknown, to know where I’m at. We’ve got the training banked now from the past few years and we can look back and see ‘I ran this, when I was doing this session’. Looking at the sessions, I’m really happy with where I’m at and I know there’s some good times in me.

“It’s perfect with Glasgow 2019, as well. You always want to perform well at a championships but when it’s right on your doorstep and it’s at the stadium you train at then you want to be in good shape.”

Stafford is clearly benefiting from the time she has spent training with coach Andy Young’s group since September and admitted she has been very grateful for Muir’s welcoming nature.

“We are part of the same sports agency,” said the university student who will return to Toronto to complete her degree before moving back to Scotland full-time.

Two other members of Young’s training group also finished first on the night. Jemma Reekie came out on top in the women’s Scottish Championships 3000m event, but was out of sorts and shy of the European qualifying mark in clocking 9:16.48 to win from Wallsend Army’s Danielle Hodgkinson (9:25.35) and fellow Young runner Kerry MacAngus (9:25.50).

In the men’s race, Sol Sweeney kept the medals coming when he clocked a big personal best of 7:56.79 (to be confirmed officially) for the Scottish title following an impressive battle with Adam Craig of Inverclyde.

“It definitely makes it easier to have people pushing you like that,” said Sweeney. “I did a race in Cardiff recently and I had to do a lot of racing on my own – that makes it a lot tougher. It was 7.56, I want to be a wee bit quicker than that, with European Indoors in Glasgow. The qualifying standard for that is a bit lower (7:53). I’m not a million miles away but it is a four-second PB so I am definitely moving in the right direction.”