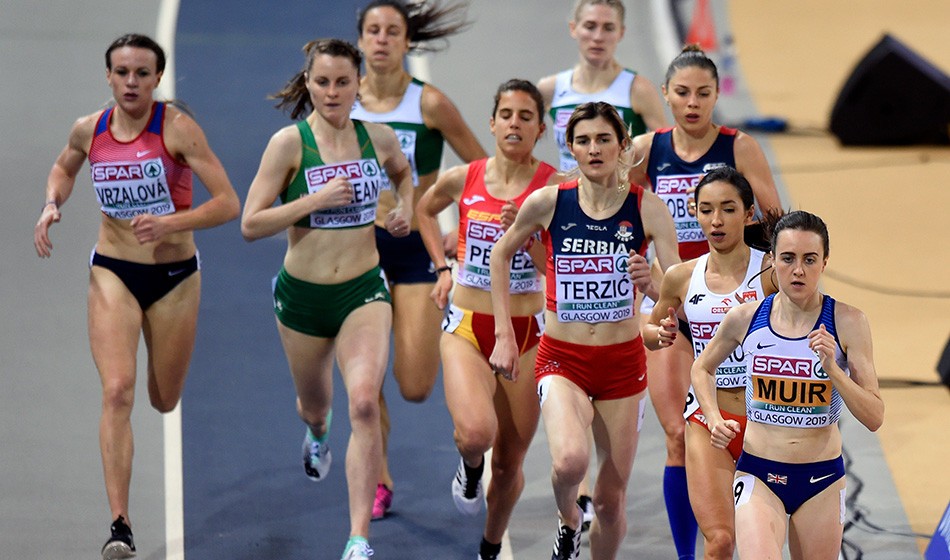 Mission accomplished. Job done. Laura Muir’s target this weekend was to create history by becoming the first athlete ever to successfully achieve a European Indoors “double-double” and she did just that in considerable style by adding 1500m gold to her 3000m title at the Emirates Arena in Glasgow.

She briefly wore a tiara thrown from the crowd, appropriate for an athlete who has been queen of this track over recent days.

Muir expects to be back training at the venue again at some point by the middle of the week, by which point the dust might just be settling on another remarkable evening of athletics in Scotland.

She added to Great Britain’s haul of 12 medals, a total which saw the home squad finish second in the table but is a championships record for the nation.

Shelayna Oskan-Clarke was another British golden girl, producing a very impressive victory in the 800m, and the steady stream of home success meant there was already a considerable feelgood factor in the arena when Muir stepped on to the stage.

But would her championship 3000m record-breaking exploits of Friday night have taken too much of a toll and affect her chances? The emphatic answer was no.

Muir went to the front from the early stages of the 1500m contest and created the impression of simply playing with the opposition.

Poland’s Sofia Ennaoui, second to Muir in both the European Indoors of two years ago and at the outdoor European Championships in Berlin last summer, tracked her opponent but, when the time came, the front-runner once again fired the rocket boosters and set off for the finish line.

With Europe conquered, world championships and Olympic success will now dominate the 25-year-old’s agenda and she already feels in a position to realise that ambition.

“It’s special,” she said of he weekend’s work. “I set myself a big task this weekend and, as it came closer and closer, I was thinking ‘what have I done?’ People were getting world leads and national records and the fields were much stronger than last time. But there was no way I wasn’t winning in front of this crowd and I’m so pleased I could do that.”

Of her place in history she added: “Nobody can take that away. That’s it done. I’m the first person to do it. It’s really special. I’m just so pleased I could do it here with all my friends and family watching. To get those performances was really special.

“I had Plans A, B, C and D. That was Plan A. I’m just so experienced now. With my ability, I know how hard I can push and what my other competitors can do. I’m at that stage now that I know what I can do and I can show it in different races with different challenges.”

Asked what she now needs to do to take the next step and win global medals outdoors, Muir said: “Not much more. I feel it’s there now. It’s a matter of maintaining now and making improvements where I can. Since finishing my degree, we’ve made improvements in a few areas but they can always be improved more. Northing’s ever going to be perfect. There are little things and it’s matter of working really hard over the six months until Doha.”

Oskan-Clarke’s confidence levels will now also have ratcheted up a notch or two. After winning silver in Belgrade two years ago and bronze at the world indoor championships in Birmingham last year she finally got the upgrade she so craved with a fine front-running display. 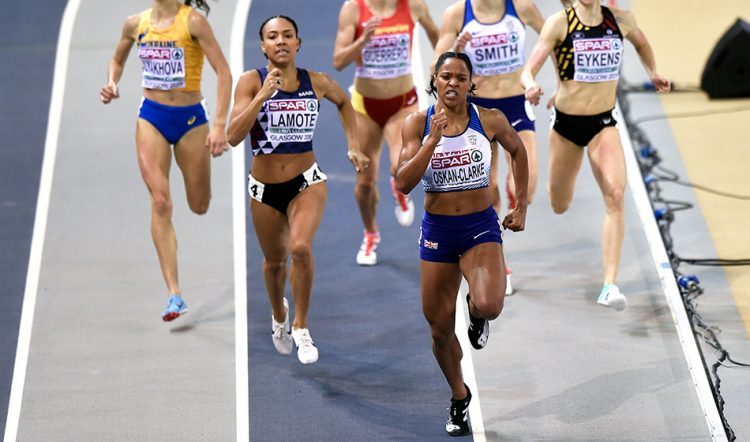 Determined to control the race and run it on her own terms, the 29-year-old looked assured as she held off the challenge of double European silver medallist Renelle Lamote, clocking 2:02.58 as the Frenchwoman landed another runner-up spot in a time of 2:03.00, while Ukrainian European bronze medallist Olha Lyakhova was third in 2:03.24.

“I’m just so pleased,” grinned Oskan-Clarke, who covered the opening 400m in 60.42. “I loved the feeling of crossing the finish line knowing I’d won gold.

“I decided beforehand I wanted to go out and focus on getting out in front because I wanted it to be a bit quicker I would then just work really hard on the third lap. I knew at 150m I just wanted to go and remembered to pump my arms and turn my legs.

“I know I’m strong, but it is just about making the right moves at the right times. It’s hard indoors because, if you don’t do that, it’s too late. I wanted to be out there early and hold on for home. I knew I’d have no regrets then.”