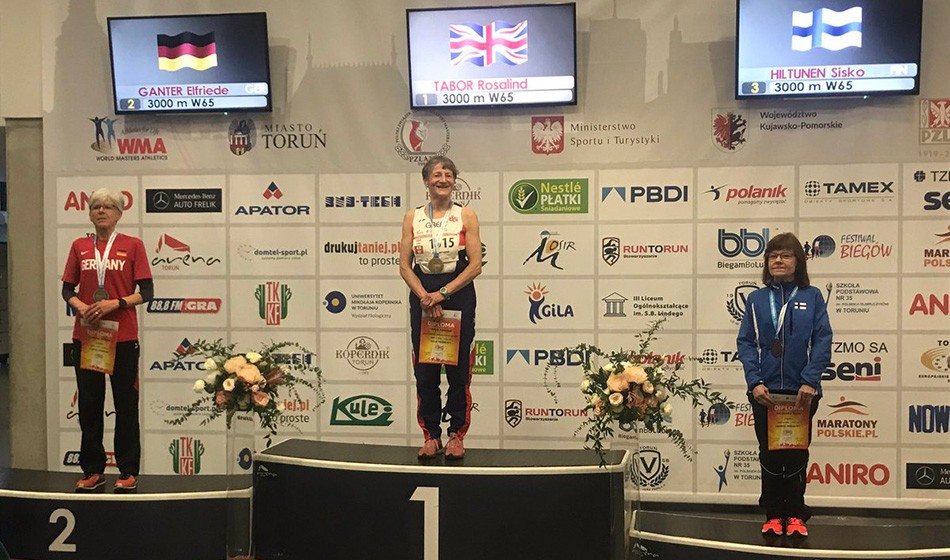 Great Britain had a good first day on the track at 3000m as the World Masters Indoor Championships began in Poland.

The venue in Torun is regarded as the greatest stadium yet used for these championships. It was where Laura Muir ran a 1:59.50 800m earlier in the season as part of the IAAF World Indoor Tour.

He pushed the first kilometre in 3:02.90 to build a good lead and then hold his advantage in the second kilometre which he passed in 6:09.80 before pulling clear in the final kilometre to win easily in 9:15.25.

Ben Reynolds, who got hopelessly boxed on lap one and then sprinted to make up some of the gap, was second most of the race but faded to fourth in the closing stages in 9:34.01.

Britain were more successful in terms of gold in the women’s event.

Behind her a big pack gathered to contest W65 gold and Ros Tabor (pictured), who joins Copson in the W70 ranks in a few months, sat in the group for the first half before accelerating in the closing stages but only got clear for gold in the last 300 metres as she won by six seconds in 13:20.96.

The world W55 record-holder sat in behind her major rival Esther Pedrosa Carrete of Spain to after 2000m and then covered the last kilometre well inside world record pace to take over 22 seconds off her rival in the last four laps and win in 10:31.69.

In the British Masters Indoor Championships, Elms has set a 3000m world record thanks to the pacesetting of W40 Zoe Doyle who eventually finished close behind her.

In Poland, Doyle played the waiting game and with a fast last 200m sprinted to victory in 10:26.40 to win W40 gold, four seconds up on Ireland’s Mary Leech.

Other British medallists at the distance were M75 Victor Shirley, who ran 12:28.07 for silver, and M85 Richard Pitcairn-Knowles, who won bronze in 18:57.99 in s time just outside his recent UK record.

Though the best track performance of the day came from Sergey Polikarpov of Kazakhstan as he won the M60 3000m in a world record 9:43.11 with three even-paced kilometres.

The previous record of 9:43.88 belonged to Britain’s Andrew Brown, set 25 years ago.

W50 Nicole Weijing-Dissel of the Netherlands set out at well inside world record pace in the W50 event with a 3:14 opening kilometre but paid for her fast start and won in 10:25.36 from a fast-closing Annette Kealy of Ireland.

Britain’s golds did not come just in the 3000m though as world record-holder Wendy Laing won W55 high jump gold with a leap of 1.52m, well in excess of her previous best for 2019.

She had three attempts at a world record 1.56m and it was her last attempt that came nearest.

Also in the field, former Olympic and world long jump medallist James Beckford of Jamaica won the M40 title with a leap of 7.17m, with all four of his measured leaps superior to the opposition.

Britain’s Joe Appiah missed out on M45 silver by a centimetre as his great Swedish rival Mattias Sunneborn jumped 6.27m to head group 1, but in group 2, USA’s Lee Adkins jumped 6.57m to take the gold.