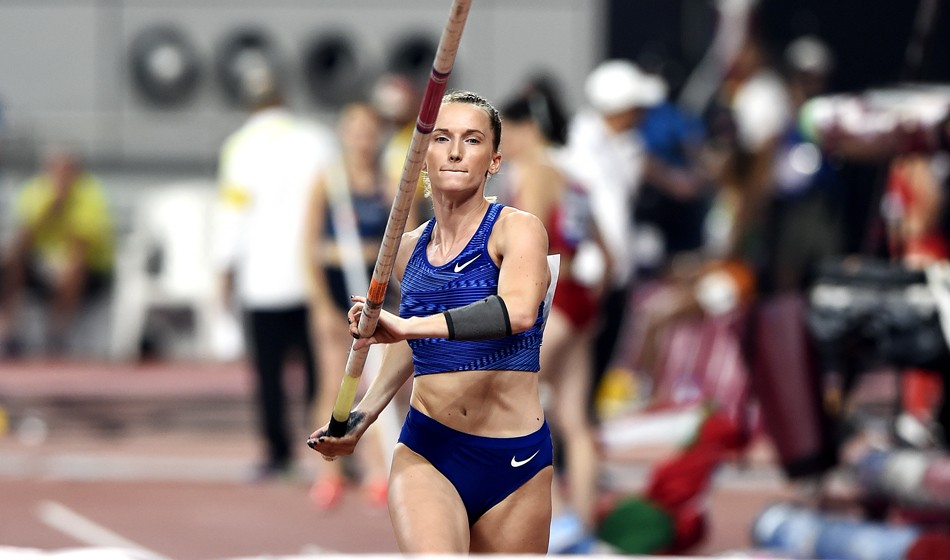 Anzhelika Sidorova picked the perfect time to produce a lifetime best as she landed world pole vault gold with the very last leap of the competition.

The Russian, competing as an authorised neutral athlete, cleared a world-leading height of 4.95m to win an almighty tussle with American Sandi Morris (4.90m) and reverse the one-two standings from last year’s world indoor championships.

Defending champion Katerina Stefanidi, also the current Olympic, European and Diamond League champion, unusually had to settle for a lower step on the podium in taking bronze with a best of 4.85m while Britain’s Holly Bradshaw was fourth with 4.80m.

Sidorova and Morris had matched each other vault for vault, both clearing heights of 4.50m, 4.70m, 4.80m, 4.85m and 4.90m at the first time of asking, with neither competitor giving way in an absorbing contest.

They even mirrored each other in both failing with the first two attempts at 4.95m but, when Morris didn’t succeed with her third effort, it left the door open for her opponent to seize the moment and she did so in some style.

“We knew that we would be forced to jump at least 4.90m to get to the podium in Doha, but it turned that we had to go to 4.95m,” said Diamond League runner-up Sidorova, whose previous best had been 4.86m.

“I felt confident at every height. I set two outdoor personal bests of 4.90 and 4.95, but I even didn’t think about that. I was focused to clear every height at my first attempt, because it was the only chance to win.

“A few weeks ago I cried when I lost the Diamond League final. Now I’m glad I was beaten there. It made me angrier, stronger and much more focused on the main season’s goal.”

Stefanidi didn’t quite hit top form, clearing 4.80m at her second attempt – as did Bradshaw. That height also represented a Swedish record for Angelica Bengtsson, who had suffered a rough landing after her pole snapped on what had initially been her final attempt at the height.

Bengtsson would bow out at 4.85m to finish sixth, the same stage as fifth-placed Canadian Alysha Newman.

Stefanidi and Bradshaw were both still in the medal hunt, however. The Greek went over 4.85m at the second time of asking, while the European bronze medallist failed her first two vaults and then passed on her third to set herself the challenge of leaping a British record 4.90m (her current mark is 4.87m indoors) to keep her hopes alive. It wasn’t to be, however.

“It’s the best form I’ve been in all year – I jumped a season’s best – one centimetre off the British record (the outdoor mark is 4.81m), and you know what? It wasn’t perfect there are still so many areas I can improve upon and that gives me hope and confidence moving forward to Tokyo which is less than a year away,” said Bradshaw.

Stefanidi had one failed effort at 4.90m before passing to instead target 4.95m and put pressure on her rivals. However, the battle for gold just came down to two and that memorable finish.