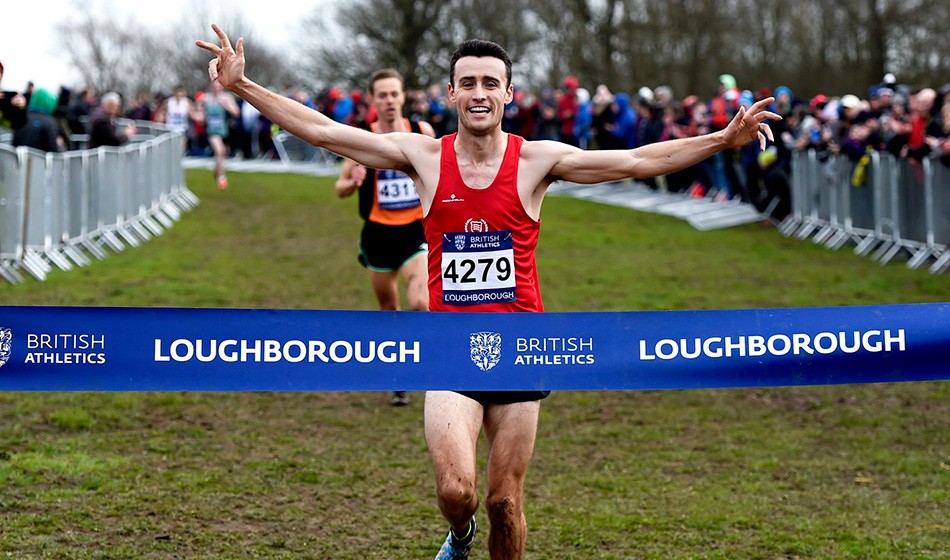 It has been 12 years since Adam Hickey last made the GB team for the IAAF World Cross Country Championships. Back in 2007 he ran in Mombasa as a junior and on Saturday at Prestwold Hall near Loughborough he booked his ticket to the 2019 event in Aarhus by winning the British senior men’s trial ahead of Ross Millington.

Producing his best run since taking the English National title at Parliament Hill 12 months earlier, Hickey clocked 32:44 on the undulating and windswept 10km course to beat Millington by a few strides.

Behind, Oliver Fox was a surprise package in third. The Cambridge University student was third in the BUCS Championships – his only race of the year prior to Prestwold Hall – but finished ahead of fourth-placed Patrick Dever, 2018 Inter-Counties champion Mahamed Mahamed, Luke Traynor, Carl Avery, John Millar and Tom Evans – all of whom were battling for places in a squad for Aarhus that will be named on Tuesday.

“It was tough but I felt good when I was out there,” said Hickey, who is coached by the former London Marathon winner and UK 10,000m record-holder Eamonn Martin. “I could sense it was going to be a battle with Ross as he was the one who seemed most comfortable in our group.”

On finishing in one of the top two automatic qualifying positions for Aarhus, he added: “My last World Cross was in Kenya, but I’ve kept plugging away.

“It’s great to make the team. I just need to make sure I get time off work now!” he added.

Millington said: “I’d not been here before and not seen the course, but as soon as I arrived I knew I would have to be patient in the race and let everything take its toll.”

He was right, as a large group of contenders battled away for much of the race before Millington and Hickey broke clear in the closing stages.

“I tried a few little digs but didn’t get anywhere. Then myself and Adam got away and in the end he was a bit too strong for me up the hill near the finish,” Millington added.

Matt Willis took victory in the under-20 men’s race and celebrated in ‘triathlon style’ by walking over the line and carrying the finish tape above his head. He just about had the luxury of enough time to do it as well as he beat Rory Leonard of North East Counties by 12 seconds.

Leonard was pleased to finish runner-up, though, after running most of the 8km race with one of his shoes only half on his foot. The English National champion’s sock liner on the heel of his right spike got snagged early in the race but somehow managed to stay in place as he earned silver.

“I’m so relieved and feel lucky it stayed on,” he said. “Halfway around I thought ‘should I just take it off?’ because the ground was okay in places. But half a spike on is better than no spike.”

“It started quite slow, which is why it was bunched,” said Willis. “I managed to stay out of the wind and then tactics came into it and with 2km I just felt fresh, my breathing wasn’t that bad, so I gave it a big kick and I knew that mentally it could break the opponents, even if physically it didn’t, and then I had to hold it until the end.”

After the success of triathletes Alex Yee and Beth Potter against dedicated runners recently, Willis is the latest multi-events endurance athlete to win a national distance running event. Hours of swimming and cycling training obviously helped but his running training included having a session on the Prestwold Hall course a few days ago due to the fact he’s based at nearby Loughborough University.

In the younger age groups, Sam Charlton of North East Counties took the under-17 men’s title in a keenly-fought race. Hamish Armitt enjoyed a clear lead halfway through the race and despite being caught and passed the Scotland West runner held on to silver, as Joshua Dickinson of Yorkshire was third followed by Kent duo Cameron MacRae and Matthew Stonier, then Mo Ali of Middlesex.

Louis Small of Kent took the under-15 boys title from Frasier Sproul of Cumbria and Joshua Robins of Worcestershire.

Ben Peck won the under-13 boys race for Suffolk – seven seconds ahead of William Rabjohns of Dorset and Henry Dover of Essex.

» See the March 14 issue of AW magazine for full coverage