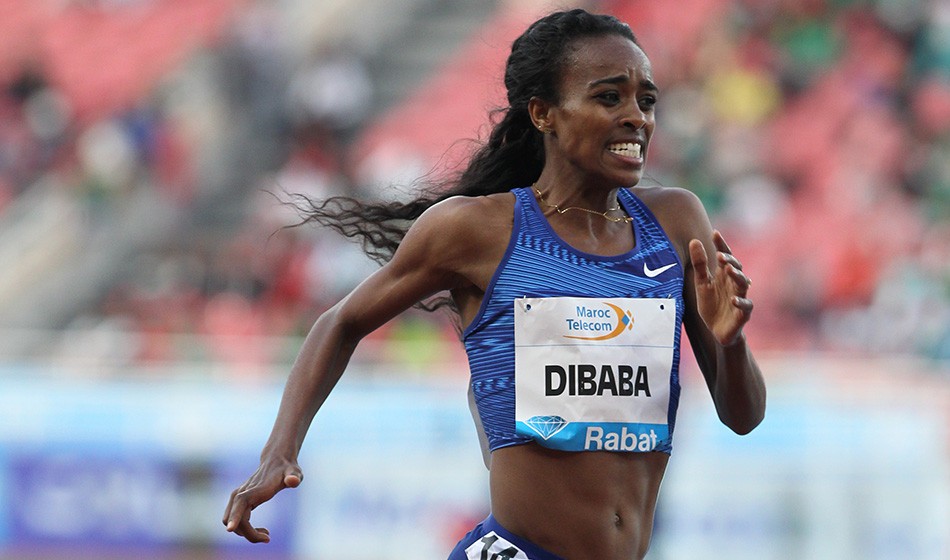 Fedrick Dacres breaks Commonwealth discus record, while a record nine athletes break 4:01 in the women’s 1500m at the Diamond League meeting in Morocco

World record-holder Genzebe Dibaba continued her winning ways at 1500m as the IAAF Diamond League series moved on to Rabat on Sunday.

That was too fast for Gudaf Tsegay who had to let Dibaba go but Sifan Hassan moved up to the leader’s shoulder. Dibaba looked all-out and was grimacing and Hassan looked much stronger and more relaxed on the final bend but in the finishing straight, Dibaba was able to maintain the better form as she completed a painful 63.38 final circuit.

Her 3:55.47 was an African all-comers record and a world lead and Hassan had her best track race of a so far disappointing season as she set a Dutch record of 3:55.93.

“I am happy with my performance and it’s great running in Africa,” said Dibaba. “Based on my level and performance, I feel ready for the World Championships.”

A record nine athletes broke 4:01 and that included Eilish McColgan who continued her PB form with 4:00.97 which moved her up to ninth in the all-time UK lists and ahead of her mother Liz’s 4:01.38.

In the field the best event was the men’s discus, as Jamaica’s Fedrick Dacres broke the Commonwealth and Diamond League record with his 70.78m throw.

At first his third-round attempt had been judged to be a foul, but the Commonwealth champion appealed that decision and later gained the win, as well as those records.

Daniel Stahl of Sweden was second with his fourth-round 69.94m. Austrian Lukas Weisshaidinger was third with 68.14m.

There was a Cuban one-two in the women’s discus with Yaime Perez’s 68.28m meeting record giving her the edge over world leader Denia Caballero’s 65.94m.

Perez led throughout and already had it won with a 66.80m throw but she improved to 68.28m with her final throw.

World and Olympic champion Sandra Perkovic was again well below her best with just one legal throw – a 64.77m, which placed her third.

The runners paid for the too fast start as Nelly Jepkosgei won in 1:59.50 with Habitam Alemu also inside two minutes in second.

Lynsey Sharp easily had her best race of the year and she finished fourth in a season’s best 2:00.61 which puts her top of the UK outdoor 800m rankings.

There was also a world lead in the men’s steeplechase.

The race was the final event as the organisers expected Soufiane El Bakkali to send the home fans happy.

Well ahead the win went in a fast finish to Ethiopian 18-year-old talent Getnet Wale and his 8:06.01 was also an Ethiopian record.

In second, his team-mate Chala Beyo ran 8:06.48 with Benjamin Kigen leading the Kenyan challenge in third.

There was a dramatic men’s 110m hurdles. Olympic and world champion Omar McLeod was a clear leader most of the race but lost his balance over the last hurdle and tripped and doing so brought down former world champion Sergey Shubenkov who was actually propelled forward and the Russian won in 13.12.

He said: “It was a dramatic race. The clash with Omar did not affect my time.”

Andrew Pozzi continued his good form with second in 13.30 as McLeod finished fourth in 13.48.

As expected, Salwa Eid Naser won the 400m in 50.13 but the margin was only a metre as Niger’s Aminatou Seyni closed fast at the finish and was second in a national record 50.24.

The women’s 100m saw a quick finish from Nigerian Blessing Okagbare who caught Marie-Josee Ta Lou almost on the line but was moving so fast she was given 11.05 to Ta Lou’s 11.09. There was a 0.6m/sec headwind.

Dafne Schippers was a below par fifth in 11.32.

In the men’s 800m, oblivious to the runners behind him, pacemaker Saul Martinez led through 400m in 49.96 with everyone else ignoring him and Jonathan Kitilit led through 600m in a modest 79.33.

Canadian Andre De Grasse finished strongly to win the 200m in 20.19 as world champion Ramil Guliyev unusually faded and was second in 20.28.

Ukraine’s Bohdan Bondarenko won a modest high jump on countback with a 2.28m leap but better form was shown by American Sandi Morris who won the pole vault in a meeting record and season’s best 4.82m.

Holly Bradshaw was ninth with 4.57m.