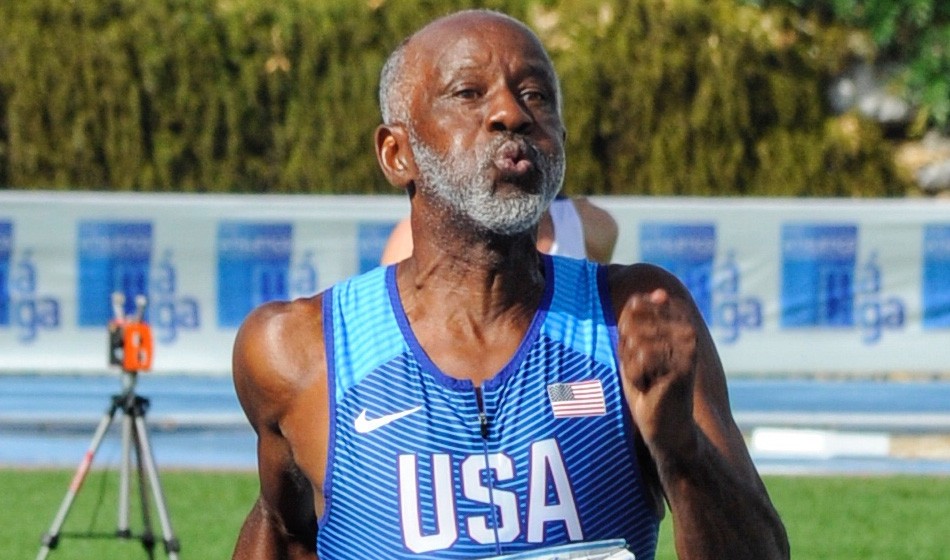 World Masters athlete of the year Charles Allie might not have been the fastest male sprinter in action on the sixth day of the World Masters Indoor Championships, but he was the most impressive.

Winning the M70 200m by an astonishing two seconds, the 71-year-old’s time of 26.11 obliterated his own age group world indoor record of 26.45 as he gained his third gold of the championships in Torun, Poland.

Coogan was the UK star one-lapper as the reigning European Masters indoor champion and world outdoor runner-up looked in control throughout and at the finish he could celebrate with a clear win in 23.16, three metres up on France’s Marc Ozier’s 23.46.

M55 Brown, who had already medalled in the 60m, set a PB over the M50 specification of 9.02 as he beat off the challenge of Netherlands’ Wan Bakx and fellow Brit Neil Tunstall (9.17).

Multi-talented Bowman won the M80 gold with a clear win in 11.77, well ahead of USA’s Roger Vergin.

Albrow had a clear win in the W35 age group pentathlon as her 3433-point score gave her a 47-point lead over Poland’s Magdalena Szczepanska. She finished with a win in the 800m with 2:31.63.

Britain’s women gained a number of silvers in the one lap events.

60m champion Caroline Powell was taking on World Masters athlete of the year Karla Del Grande, who had beaten her at 400m. Powell was in contention at half way but the Canadian powered away to win in a world record 29.73.

Powell was unable to match her fast heat time of 30.20 and ran 30.61 for a very clear silver while Joylyn Saunders-Mullins also won her third sprint medal as she took bronze in 31.75.

Belgium’s Damien Boothaerts impressed as he won the M35 hurdles in 7.97 and followed that up with a clear 200m victory in 22.13.

France’s Nicole Alexis was a long way from her world record of 26.13 in the W55s set in Torun four years ago but still won clearly in 27.80.

There were some competitive races in the oldest age groups as Christa Bortignon of Canada won the W80 race in 39.50 from Rose Green of the USA’s 39.60, while there was a W85 world record for USA’s Irena Obera in 44.18 just ahead of Emma Mazzenga’s 44.28.

All the older men also astonished with their speed and athleticism.

Ireland’s Snezhaba Bechtina won the final race of the evening, the W35 event, in 25.68.

In the hurdles, apart from the wins of Appiah, Bowman and Brown, there were two other GB medallists.

M40 Mensah Elliott was second in 8.27, well behind Germany’s Jan Schindzielorz who ran 7.94, while Anthony Wells matched that in the M70s with 10.31, a metre down on Slovak Milan Beliansky.

In the multi events, other than Albrow, Susan Frisby excelled to take W55 silver in 3986 behind one of the top athletes at these championships, Neringa Jakstiene of USA, who won with 4520 points.

Kehler, the former Olympian and British Commonwealth medallist, excelled to take W50 gold in a time of 53:26 as she won from Hungary’s Katalin Bodorkos Horvath (54:53).

Kehler was also part of Britain’s W40 winning team in the 10km walk and in an event with seven teams, Britain won by just nine seconds from Germany.

Carolyn Derbyshire was also part of the team and she won W40 individual silver in 56:16 with the team completed by W55 Maureen Noel (66:34).

W80 Williams continued her throws domination as she threw 33.22m to take the hammer title, eight metres up on Mongolian Tserendolgor Tumurbat’s 24.98m.

Her hammer win came a few days after setting a world W80 javelin record of 27.51m.

With just one day to go, Britain have dropped to fourth in the medal table but still could finish second.