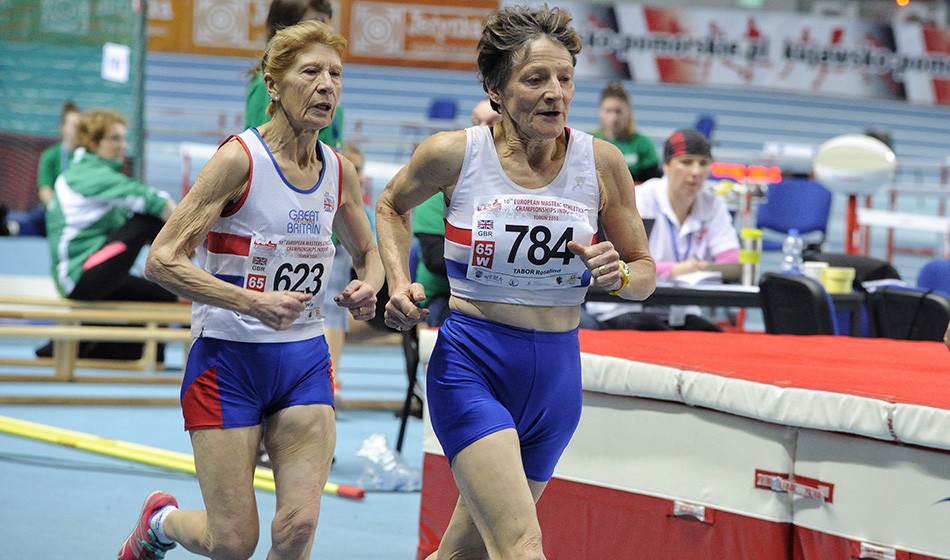 The World Masters Indoor Championships will welcome 4345 entries from 88 countries to Torun in Poland from March 24-30.

The host nation has the biggest team with 870 entries, while Germany has 475 and Great Britain 393.

The most recent World Masters in Malaga last summer saw the UK narrowly topping the medals table but Germany will start favourites to overturn that advantage this time.

W55 Clare Elms, one of two world-record setters in the British Championships, has set eight world marks this winter but will focus on winning titles rather than records as she tackles four events in Torun.

At her shortest distance of 800m she will be up against British and European indoor and world outdoor champion, Virginia Mitchell.

Helen Godsell, who set a 200m world record at Lee Valley, is not entered so Caroline Powell, who set a European 400m record, leads the UK challenge but will be up against formidable world outdoor champion Karla Del Grande of Canada at 200m and 400m.

British representatives arrive in Stadium at the World Masters Indoor Championships at Torun in Poland pic.twitter.com/OLHDGx1Q4u

In the hurdles, M60 James Tennyson is top-ranked as is M45 Joe Appiah where world outdoor champion and team-mate Gary Smith and American Don Drummond could challenge.

Dwain Chambers tops the M40 60m rankings but is not competing. Tamunonengiye-Ofori Ossai and world champion Dominic Bradley are though and will have excellent chances. They will also challenge at 200m along with Rick Beardsell.

Jason Carty is one of the favourites in the M45 60m.

For the women sprinters, W40 Claire Spurway should feature among the medals while at the W45s, Michelle Thomas looks the best British chance but at 200m will be up against Germany’s world champion Heike Martin and Poland’s Joanna Balcerak who have been faster this winter.

W65 world champion Alison Bourgeois should win the 800m and 1500m unchallenged. Ros Tabor (pictured) also runs these events and when the Europeans were in Torun in 2015 she won over 400m but here 3000m is probably her best event.

James Thie, who dominated the M35 events in Budapest five years ago, runs the M40 1500m, while world record-holder Irie Hill will be a huge favourite in the W50 pole vault.

Britain’s walkers are led by Ian Richards who won the M65 title five years ago in Budapest.

Find an event timetable and further information at wmaci2019.com.

» See the March 21 edition of AW magazine for a more in-depth preview, plus keep an eye on our social media channels and website for updates