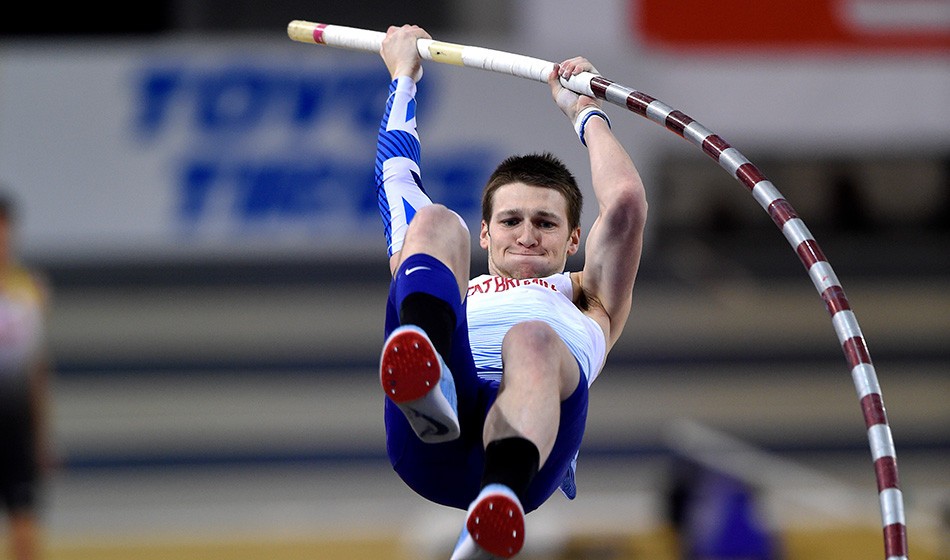 Before these championships, Tim Duckworth had spoken to AW about how significant winning the first major championships medal of his career in Glasgow would be, how much it would confirm the fact that he was on the right track towards athletics success.

The multi-eventer who was born in America but competes for Britain had to dig deep but he got just what he wanted, a seven-second personal best in the 1000m not only assuring him of a heptathlon silver medal but also a place in history. He is the first Briton to reach the podium in the event at the European Indoor Championships.

The 22-year had begun the day with a slender lead after the opening day’s competition but was overtaken in the morning session by Jorge Ureña. Both cleared a best of 5.00m in the pole vault, while the Spaniard went quickest in the 60m hurdles with a PB-equalling 7.78 and Duckworth clocked 8.16.

It meant the gap between the top two was just six points, the 2017 European indoor silver medallist leading with 5391 points to Duckworth’s 5385 with just the track event left to go.

Middle distance is not the Briton’s strength but though Ureña streaked away to hit the line first in 2:44.27 and secure gold with a world-leading total of 6218, Duckworth produced the run of his life to clock a medal-winning 2:49.44 to finish on 6145.

“It’s hard to describe,” said Duckworth, last year’s NCAA champion. “I knew I could do it but to come here and do what I did in the 1000m was great.

“I needed a PB and I knew I could do it in the 1000m, so that was the main goal going into it – just run as fast as I can, for as long as I could. There were lots of ups and downs. That’s for sure. It started out well, took a dip with shot put, came back up with the high jump, then at the beginning of today kind of went back down but I finished strong.

“I’ve been dreaming about that feeling of winning a medal for a while.”

The 2013 European indoor pole vault champion Bradshaw already knows that medal winning feeling and added another to her collection in a competition where the defending champion Katerini Stefanidi looked out of sorts and finished out of the medals completely.

The Greek did not look comfortable, having to rely on her third attempt to clear 5.65m. Bradshaw was the only vaulter to match 2015 champion Anzhelika Sidorova’s first-time clearance of 4.75m and was assured of a medal when Stefanidi exited the competition after failing to clear that height, while fellow Greek Nikoleta Kiriakopoulou also followed suit.

The gold medal fight came down to Bradshaw and Sidorova, the authorised neutral athlete then clearing 4.80m and 4.85m. The Briton only went for the higher mark but failed to clear it while Sidorova then made three unsuccessful attempts at 4.92m. 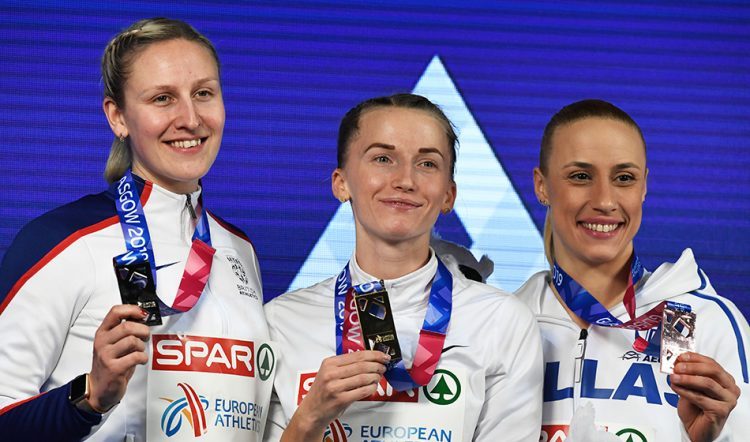 “This indoor season has been shock after shock for me,” said Bradshaw, European bronze medallist outdoors last summer who has exceeded her expectations this year. “Obviously clearing 4.80m wasn’t in the plan, then clearing it again showing consistency and then I was so confident coming in – I felt in really good shape and I’ve managed to jump 4.75 in a major champs final so yep I’m happy.

“Back in 2013 when I won I was coming off the high of the Olympics. Then 2014-2017 I had a real bumpy patch with a lot of injuries and there were times when I questioned if I could ever get back to the level I thought I could be at – this indoor season has really concreted it to me that I can compete with the best – I can be jumping 80-90, so I am pleased to be out competing, doing what I love and winning medals again.

“That’s what I do it for. I am really looking forward to the outdoors now and seeing what I can do.”

Two years ago in Belgrade, Ivana Spanovic enjoyed huge home support in the long jump and won her second European indoor long jump gold, but in Glasgow on Sunday she showed she can win away from home as well as she sealed a hat-trick of titles with a 6.99m clearance.

Nastassia Mironchyk-Ivanova of Belarus led for the first four rounds with 6.93m before Spanovic took over with an equal world-leading mark in the fifth round.

“It’s not just gold to me. It’s third in a row,” said Spanovic. “And I’m really pleased that I’m back after the injury (Achilles) I had at the European Championships in Berlin last year.”

Abigail Irozuru of Britain was seventh with a best of 6.50m.

In the high jump, the world champion regained the title she first claimed in 2015 thanks to her clearance of 2.01m. She also had three attempts at 2.05m.

Britain’s Morgan Lake was visibly disappointed to bow out with a best of 1.91m to place ninth.

Nazim Babayev was a surprise winner of the men’s triple jump as the 21-year-old from Azerbaijan improved his PB from 16.68m to 17.29m to beat defending and two-time champion Nelson Evora of Portugal into second.

Britain’s Nathan Douglas jumped 16.33m in the first round but could not improve and the 36-year-old finished seventh and said: “Obviously I am disappointed. Knowing that I had six straight rounds, I decided to go for it from the first round. But I just wasn’t able to get it on the day. I gave it my all but just didn’t catch it. Sometimes that happens.”