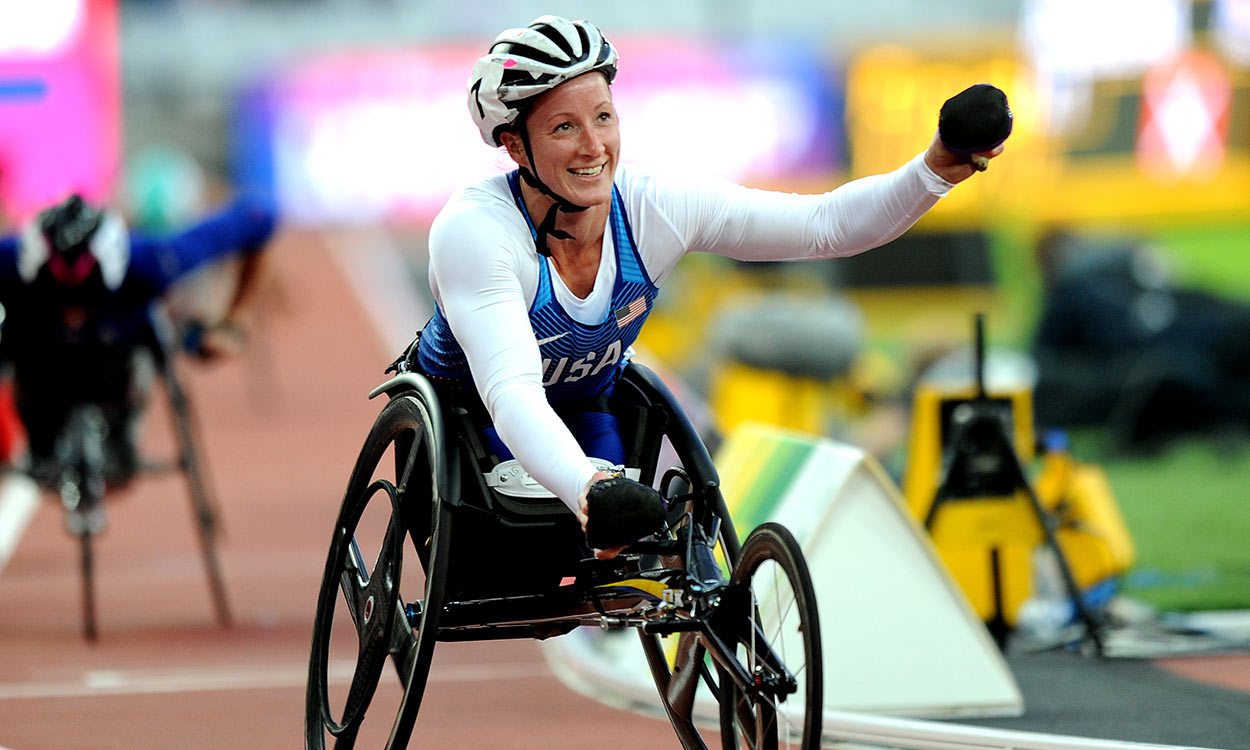 Tatyana McFadden continued her dominance of the T54 events as she won her fourth gold of the World Para Athletics Championships in London, taking the 800m title with ease in 1:47.82.

The American’s start to the season had been affected by blood clots in her legs but she returned to dominate on the track in the UK capital, winning titles in the 200m, 400m and 1500m before her 800m success on Wednesday.

“I am so proud of myself,” said McFadden, who finished more than a second and a half ahead of Switzerland’s Manuela Schär and her fellow US wheelchair racer Amanda McGrory. “It’s been a long journey this year and this is such a great way to finish these world championships. As it was my last race I just wanted to race well regardless of how I felt and how I did.

“I was a little nervous as I didn’t know if I could trust my body to be able to do it.

“I had surgery three months ago and had to focus on my recovery. All I wanted to do was to make it back to London because I love it here.”

Lyle said: “I’ve been injured coming into these championships so to come out with two bronze medals is a good thing for me. I only started to sprint on Wednesday and before last week I couldn’t walk.”

Kinghorn made a brave attempt to add the 400m title to her 200m crown. She was in contention for gold at halfway though championship record-holder Hongzhuan Zhou began to edge clear at 300 metres.

The Chinese wheelchair racer held on to win in a championships best of 55.22, as world record-holder Chelsea McClammer finished strongly for second with a 55.50 clocking.

Kinghorn just held on for bronze as she repelled the challenge of Angela Ballard of New Zealand as her 55.71 won a medal by just 0.02.

It was very close in the T13 400m as fast-finishing Leilia Adzhametova snatched victory for Ukraine in a PB 56.58 to catch Sanaa Benhama (56.66) almost on the line.

There was a similar close finish and change of lead in the men’s T47 400m as Austrian Gunther Matzinger made a late rush to catch Shane Hudson to win in 49.35 from the Jamaican’s 49.60. Favourite Petrucio Ferreira dos Santos, the 100m champion, was disqualified for a false start.

British athletes had made a great start on the track at the start of the day’s competition.

After two false starts in the T37 100m first heat, which removed two of his rivals, Rhys Jones got a flyer at the third attempt and he clocked a PB 11.69 in running world record-holder Charl Du Toit (11.68) very close.

Jones said: “My coach Christian Malcolm said that I am going to surprise a lot of people. 11.9 is my best so far this year so to run 11.69 tonight is amazing and I can’t wait for tomorrow.”

Richard Chiassaro qualified for the T54 400m final with second place in his heat in 46.93 to secure his spot as third fastest.
The 200m champion Yassine Gharbi was quickest with a championship record 46.32. Nathan Maguire just missed out on making the final with a 48.27 time, finishing third in his heat.

The final track action of the evening had the fastest female Paralympian in the world, Omara Durand, win the T12 100m by five metres in 11.52.

The T37 javelin was won by Latvian Dmitrijs Silovs with a championship best of 55.89m as he took gold by seven metres.

He started with a championship best 66.72m which he then improved to 67.57m and 68.07m with his next two throws. He didn’t stop there as he made it record no.4 with a 68.19m but those first four were just a warm-up for the fifth as there, with the crowd behind him, the javelin sailed to a world record 71.01m.

He couldn’t quite repeat that in the final round but still threw 70.17m to better the old world record.

Tunisian Raoua Tilli improved her own championship record as she won the F41 shot with a 10.04m throw, while Wang Hao of China won the T47 long jump with a 7.18m leap.

There were some non-medal winning events in the morning.