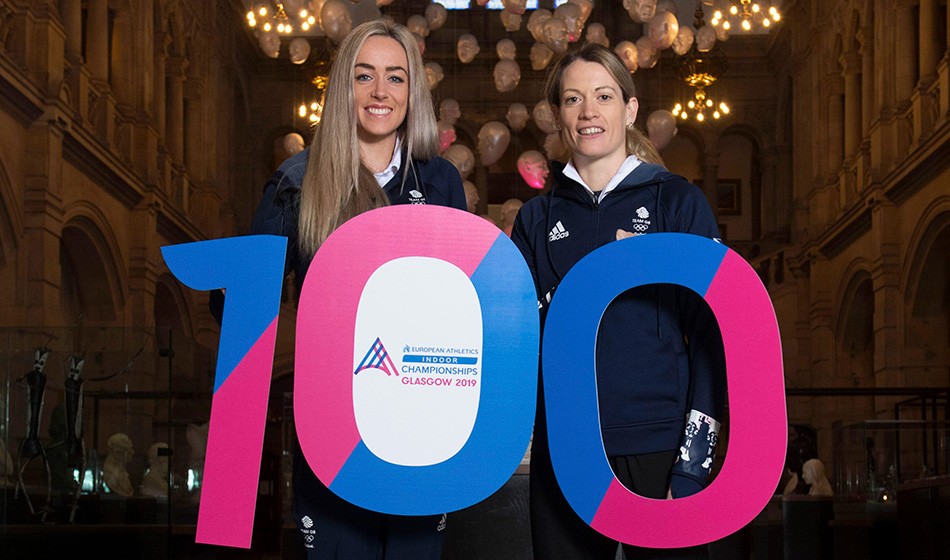 The race to the European Athletics Indoor Championships, which head to Glasgow in March 2019, is well and truly on with less than 100 days to go.

Some of the world’s leading athletes will descend on Glasgow’s Emirates Arena between 1-3 March as the Championships return to the iconic city for the first time since 1990. There will be 650 athletes from more than 45 nations setting their sights on glory.

Six sessions will be competed in across three action-packed days of competition, with qualifiers and finals contested every day.

Medals for events such as the women’s 3000m and men’s shot put will be up for grabs on day one. Meanwhile, the men’s pole vault and women’s 400m will be among the highlights on day two, with both the men and women’s long jump, 4x400m relay and 1500m all featuring on an exciting final day.

Scottish duo Eilidh Doyle and Eilish McColgan were both in attendance at the iconic Kelvingrove Art Gallery and Museum in Glasgow to celebrate the major ‘100 days to go’ campaign milestone.

Doyle is Scotland’s most decorated track and field athlete of all time with fifteen major championship medals to her name including an Olympic medal, three Commonwealth Games medals and a podium finish at this year’s World Indoor Championships.

As a proud Scot, one of her greatest achievements came this year at the Commonwealth Games, where she became Scotland’s first female flag bearer.

“I remain hungrier than ever to add to my achievements and I cannot wait to be back on home soil and competing at another major event in Glasgow,” she said. “The city has shown time and again that it is one of the best globally when it comes to hosting major sporting events and I’ve no doubts the European Athletics Indoor Championships Glasgow 2019 will be hugely successful.”

Double Olympian and European silver medallist McColgan, fresh off the back of her fantastic win at the Simplyhealth Great South Run, says she has been working “harder than ever” during the off-season training to make 2019 a year to remember. McColgan will be looking to build on what was a successful experience at the 2017 European Indoor Championships in Belgrade, where she picked up a bronze medal in the 3000m event.

“The European Athletics Indoor Championships Glasgow 2019 is the first major event in my calendar next year and my excitement has been building ever since it was first announced,” she said. “Now that we are only 100 days away from the Championships, it is at the forefront of my thoughts especially during training.

“Getting the opportunity to race at the Emirates Arena for the first time is fantastic – it is a world-class venue and I’m sure the atmosphere will be electric – I really can’t wait until March.”

The city of Glasgow welcomes the return of the Championship as it continues to build its reputation as a truly world class sporting city.

Cherry Alexander MBE, major events director at British Athletics and sport director for Glasgow 2019, said: “With another major landmark upon us in the countdown to next March’s championships, it’s fantastic to see the excitement continuing to build from athletes, fans and media now we are into the home straight of the countdown.

“We’ve enjoyed some phenomenal home championships over the last few years here in the UK, and I’m sure that both Eilidh and Eilish will be two of many world-class British athletes battling it out for the right to not only represent Great Britain & Northern Ireland but experience some of the loudest cheers of the championships when they are on the start-line next March.”

The full competition schedule is now live on www.glasgow2019athletics.com with tickets selling fast. Make sure you grab yours for your favourite event.