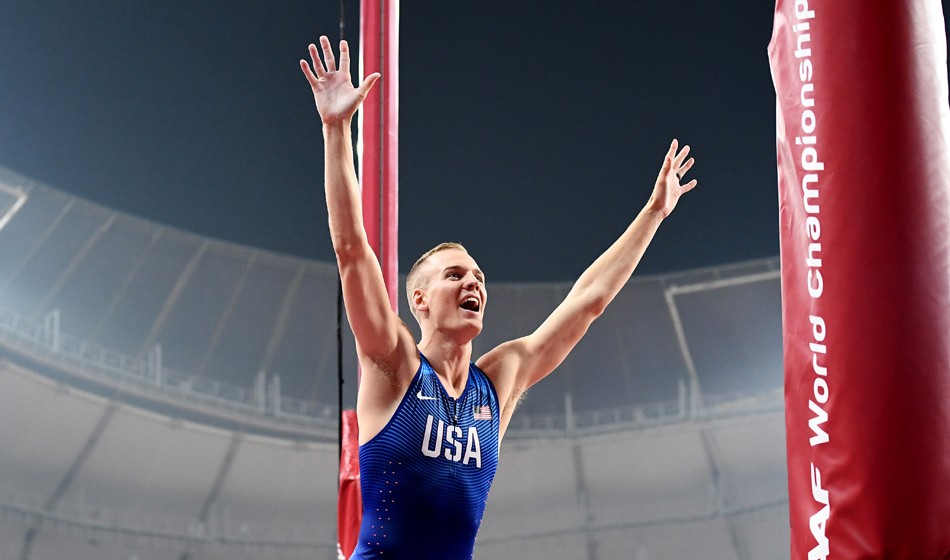 American retains his title after top competition in Doha

The jumps at the IAAF World Championships in Doha have all been great contests and of the highest standard and that continued with a pulsating pole vault competition that saw Sam Kendricks retain his title.

It took two make or break third attempt jumps for him to win gold as teenage sensation Armand Duplantis pushed him all the way.

Two hours-plus earlier, none of the vaulters exited at the opening height of 5.55m but four found the increase to 5.70m too much.

The bar was raised to 5.80m and the big three – Kendricks, Lisek and Duplantis – maintained their perfect record with first time clearances.

None of the other five could clear it on their other attempts either and the three medallists were decided.

The bar was raised to 5.87m and all three failed at the first attempt.

Duplantis’ second attempt was excellent and he took the lead but only for a few minutes as a pumped up Lisek had an even better clearance to return to being a joint leader.

Kendricks’ second attempt was better but still came down and meant he was down to third for the first time.

Surprisingly, with nothing to gain, he elected to have his third attempt at this height rather than go higher and he produced the best vault of the competition so far but remained in third.

Neither Duplantis or Lisek went close with their initial attempts at 5.92m and suddenly, from being seemingly destined for third, the American went into the lead with a superb vault.

Lisek, not interested in strengthening his position in second, passed but Duplantis chose to have another try and again failed but with his final attempt he went clear to move into the silver medal position.

With the bar raised to 5.97m, no one came close initially and it meant Lisek bowed out at his second attempt.

At the third attempt though, much to the delight of the large Swedish crowd, Duplantis squeezed over and was back in front again.

His earlier hold of gold was a fleeting one and so it proved again as Kendricks showed what a great competitor he is by going over with his final jump to regain the lead thanks to his earlier clearance.

Duplantis had three reasonable attempts at 6.02m but couldn’t clear so the American had another gold.

After the competition Kendricks and Duplantis embraced and they were joined by Lisek for synchronised backflips in celebration.

“I am elated, stunned and excited, all at the same time. It’s almost hard to take it in,” said Kendricks.

“To have three men over six metres all going for it – the Titans of the event this year – made it such a memorable night. We weren’t duelling as enemies but as rivals and friends.”

World pole vault champion @samkendricks: "I try to use every tool that I'm given, trying to be 1% better every single day. I think a lot of young athletes can relate to that. You can be an athlete with whatever body you're given – whatever path you're on, you can seek excellence" pic.twitter.com/OHfSpSWXOa