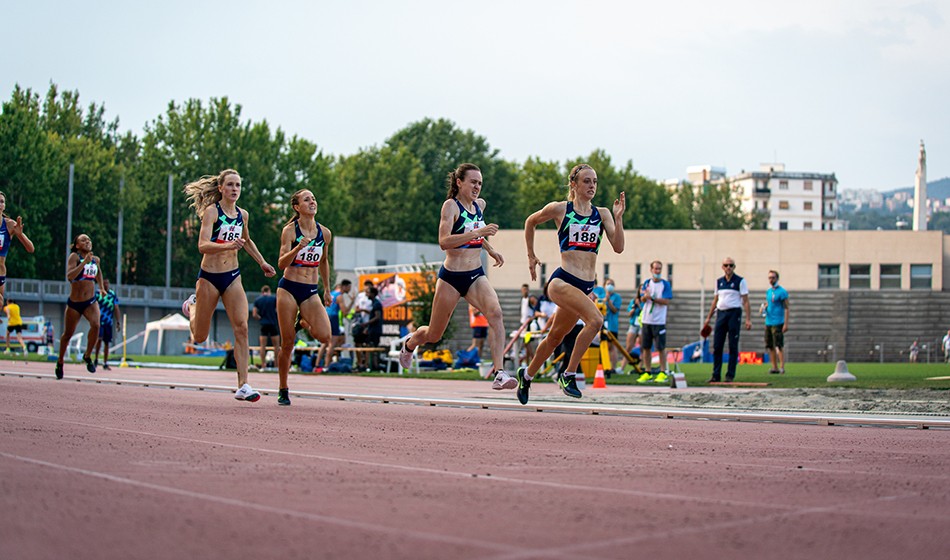 Training partners return to action with close 800m clash, while Andrew Pozzi continues his winning ways at the Triveneto Meeting

A brilliant battle between Britain’s Jemma Reekie and Laura Muir saw the training partners storm back into competitive action in Trieste on Saturday, with Reekie edging Muir for 800m victory as both dipped inside two minutes.

“Nice rust buster,” Reekie wrote on Twitter. “It’s been too long! Happy to get a sub-2 outdoors for the first time. Always wanting more.”

Reekie and Muir’s race in Italy was their first of the summer, with the Scottish Andy Young-coached duo having spent the lockdown period training together in Glasgow.

Andrew Pozzi was another British athlete to secure success at the Triveneto Meeting, with the world indoor champion clocking 13.36 (+1.4m/sec) to continue his winning ways in the 110m hurdles after his world-leading time of 13.30 set in Savona two weeks ago.

The women’s series of 100m hurdles races saw world heptathlon champion Katarina Johnson-Thompson improve her season’s best from 14.05 to 13.73 (+0.7m/s) to finish fifth in a race won by Italy’s Luminosa Bogliolo in 12.91.

World 400m record-holder and Olympic champion Wayde van Niekerk had been due to race both the 100m and 400m in Trieste but reportedly had a positive coronavirus test although he showed no symptoms. He is also said to have returned other negative tests, but was unable to compete.

Italy’s Edoardo Scotti was quickest from the two 400m races, clocking 45.85. Britain’s Ben Snaith finished sixth in his race in 47.97. Britain’s European and Commonwealth 1500m medallist Jake Wightman had also appeared on the start list but his father and coach, Geoff, later confirmed that he had never been entered in the one-lap event.

Results for the Triveneto Meeting in Trieste can be found here. The event was shown live by Vinco Sport, Runnerspace.com and atletica.tv, with fans in the UK able to watch the action back here.