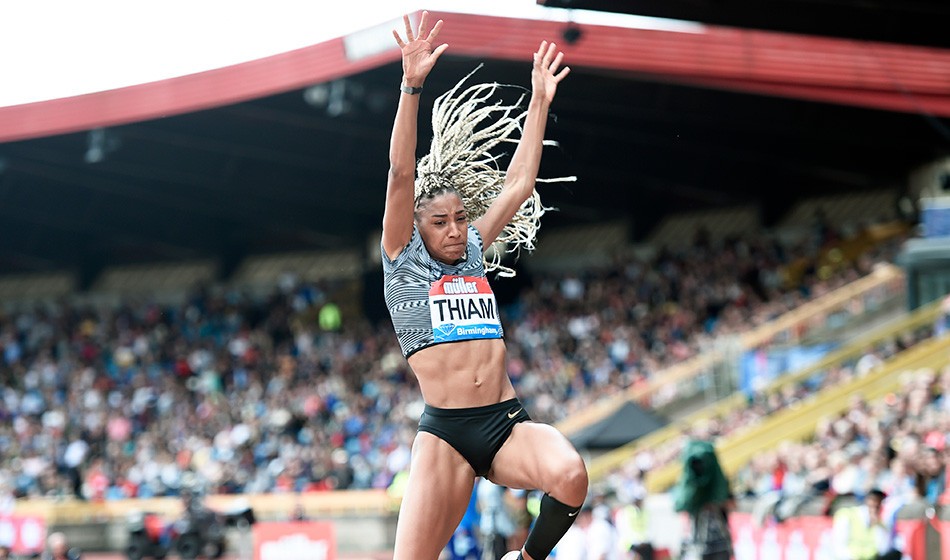 The clash between Nafissatou Thiam and Katarina Johnson-Thompson in Doha in six and a half weeks’ time looks even more mouthwatering after the pair were separated by just a single centimetre in an exciting Müller Grand Prix long jump competition in Birmingham.

They might have been competing in just one event rather than their usual seven, but the head-to-head at the Alexander Stadium whet the appetite ahead of October’s global battle, when Olympic champion Thiam will look to retain her heptathlon title at the IAAF World Championships and Johnson-Thompson will seek outdoor victory to go with her world indoor win.

On a blustery day featuring sunshine and showers, the two heptathletes lined up alongside long jump specialists including world indoor champion Ivana Španović and Brits Abigail Irozuru and Lorraine Ugen, and they more than held their own.

Thiam opened with 6.44m (+0.1m/sec) which placed her third at the end of the first round as Španović leapt into an early lead with 6.70m (+0.2m/sec) and Johnson-Thompson recorded a foul.

The next round saw Thiam soar out to 6.74m (-0.3m/sec), breaking her own Belgian record, but Serbia’s Španović responded by going four centimetres further into a -1.8m/sec headwind. There was a second foul for Johnson-Thompson, but the Briton turned things around with her next jump.

After watching Thiam further improve her national record to 6.86m (+0.9m.sec), Johnson-Thompson launched herself out to 6.74m (-0.9m/sec) while Španović recorded 6.85m which would prove to be the Olympic and world bronze medallist’s best of the competition.

Johnson-Thompson wasn’t done, however, as she saved her best leap until last and soared out to 6.85m (+0.4m/sec) to match Španović’s mark and place third on countback.

Just behind her in fourth was Irozuru, who was pleased to have achieved the world championships qualifying mark having been just two centimetres off it at the European Team Championships.

“It was a really good competition,” said Thiam, who will celebrate her 25th birthday in Birmingham before returning home on Monday.

“It gives me confidence because of the performance I had.

“Being first or second didn’t matter. Španović was 6.85m, so only one centimetre difference. It was great to be in competition with jumpers and with Kat and we’re always really pushing each other.”

.@thiam_nafi shares her thoughts on her Belgian record leap of 6.86m to win the Müller Grand Prix long jump and spending her birthday in Birmingham. “I’m going to find something nice to do!” #BirminghamDL pic.twitter.com/iZF0oZP9JK

Johnson-Thompson was also pleased with her own performance and said: “I haven’t jumped that far in a long time and I’m really happy with that showing.

“It spurs me on going up against her (Thiam) in an individual format like today.”

The women’s 200m had also been highly anticipated as another world championships warm-up, with a stellar field taking to the track.

“I am really happy to have finished second in that race although having said that, I am a competitor so obviously I want to win every race!” said Asher-Smith.

“To maintain my form and finish strongly against arguably the best 400m runner in the world is good. So, all in all, I am happy with that race.”

Comment from @dinaashersmith on her 2nd place in a world-class @BirminghamDL 200m. “When I am on the start line I like to pick women on the lanes outside me to hunt down but I remember looking today and thinking if I can catch any of them round this bend, it’s a blessing.” pic.twitter.com/tKTfK5PRhm

Bryant ran 22.84 in sixth, having earlier finished as runner-up in the non-Diamond League 100m in 11.21 (-0.9m/sec) behind Germany’s fast-finishing Tatjana Pinto.

USA’s Teahna Daniels was third in 11.24, while Rachel Miller was the leading Briton in sixth in 11.42, as Kimbely Baptiste ran 11.71 in seventh and Bianca Williams 11.77 in eighth.

Over in the Millicent Fawcett mile Konstanze Klosterhalfen broke the oldest women’s meeting record, which was Sonia O’Sullivan’s 4:24.27 recorded in Sheffield in 1992, with a German record of 4:21.11.

Post-race chat with Konstanze Klosterhalfen after her MR and NR 4:21.11 to win yesterday’s @BirminghamDL mile. “I hoped for a faster time, but under those conditions, I am happy.” She was racing after a hard altitude training block – “I wasn’t sure what I’d have in my legs now!” pic.twitter.com/nvoG3ssWlY

The race was missing British 1500m record-holder Laura Muir due to a calf injury but her training partners Gabriela DeBues-Stafford and Jemma Reekie were both in action and they respectively clocked 4:22.47 in second and a PB of 4:27.00 in sixth.

World leader Danielle Williams was almost a meeting record-breaker, too, as she equalled the 100m hurdles best with 12.46 (-0.2m/sec) ahead of world record-holder Keni Harrison with 12.66.

Britain’s Cindy Ofili, Heather Paton and Alicia Barrett had also raced in the heats, with Ofili clocking 13.15 and Paton 13.25 for sixth and seventh respectively in the marginally windy heat two and Barrett running 13.64 for eighth in heat one.

In tough conditions for pole vaulting, Olympic champion Katerina Stefanidi secured success with a clearance of 4.75m and called it a day after one attempt at 4.85m.

British record-holder Holly Bradshaw finished sixth with 4.55m and was happy after having decided to use a 10-step approach.

.@HollyBradshawPV gives some great insight into how tough the conditions were for pole vaulters at yesterday’s @BirminghamDL. “For me right now it’s about making smart decisions and the conditions were pretty awful out there, it’s probably the worst wind I’ve ever competed in.” pic.twitter.com/sqAciiquIf

World-leader Yaime Pérez claimed discus victory thanks to her third-round throw of 64.87m. That mark was enough to put her ahead of fellow Cuban and current world No.2 Denia Caballero (64.59m) and Croatia’s Sandra Perković (63.80m), who continues her comeback after injury.

» For news of the men’s events in Birmingham, click here

» Find further coverage in the August 22 issue of AW magazine