Holyrood Park is a familiar venue to top quality cross country athletes and it was no surprise to see those with extensive international experience dominate the British Universities and Colleges Sport (BUCS) Cross Country Championships at the famous Edinburgh venue.

The stage for the 2008 world cross country championships and, for many years, the annual Great Edinburgh Cross Country International played host to around 2000 athletes across four events – the men’s and women’s short and long races – and it was in the latter two contests where the most commanding victories were secured.

Anna Emilie Møller, competing for St Mary’s University, replicated her under-23 gold medal-winning performance at the recent European Championships in Lisbon as she controlled the women’s long race from start to finish, while a fine day of competition in blowy, cold conditions came to a conclusion with the men’s long race which saw current British Athletics Cross Challenge champion Mahamed Mahamed of Solent University romping to the finish line first.

Danish athlete Møller, seventh in the 3000m steeplechase at the World Championships in Doha as well as a European under-23 champion in that discipline and the 5000m last year, wasted little time in heading to the front of affairs after the gun had fired.

She was tracked by Loughborough’s Jess Judd, last week’s Northern Championships winner, but the St Mary’s runner gradually stepped up the pace to break away and successfully defend her title from last year by covering the 8km course in 28:03, 46 seconds ahead of Judd, while Cardiff Met’s Jenny Nesbitt worked her way into third place thanks to her run of 29:22. Judd’s performance took Loughborough to the team title ahead of St Mary’s. 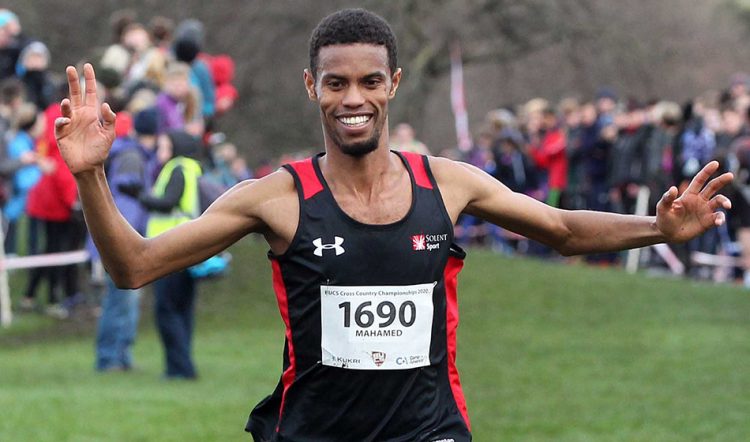 Last year’s men’s A race had been decided by the width of a vest when Leeds’ Emile Cairess outsprinted Loughborough’s Patrick Dever but the 2020 edition played out very differently. Mahamed was part of a group of a dozen or so athletes who packed together in the early stages but, when his spike ripped in the midst of the gruelling contest, the Southampton athlete decided to make what proved to be a decisive move around the halfway mark.

None of the rest of the field could live with him and he covered the 10km contest in 32:06, a full minute and 37 seconds ahead of Bangor’s international mountain runner Joe Steward, with Aston’s Jayme Rossiter claiming the final place on the podium, despite recording the same time (32:50) as St Mary’s athlete Dan Jarvis. St Mary’s took the team gold, however.

The women’s B race had got the day’s action off and running, with Grace Carson covering 6km in 28:03 to beat her Loughborough team-mate Giorgia Chattwood by eight seconds. Birmingham’s Kate O’Neill completed the top three but, with three athletes in the top four (Kirsty Walker clocked 22:45) Loughborough unsurprisingly took the team title ahead of Birmingham and Oxford.

The medal-winning exploits of St Mary’s were started by Joe Wigfield as he held off his team-mate and training partner Alex Ediker to win the men’s B race by five seconds in 26:48. Loughborough’s Thomas Patrick was third over the 8km course in 26:54 to lead his university to another team gold, with St Mary’s taking second spot and Cambridge third.