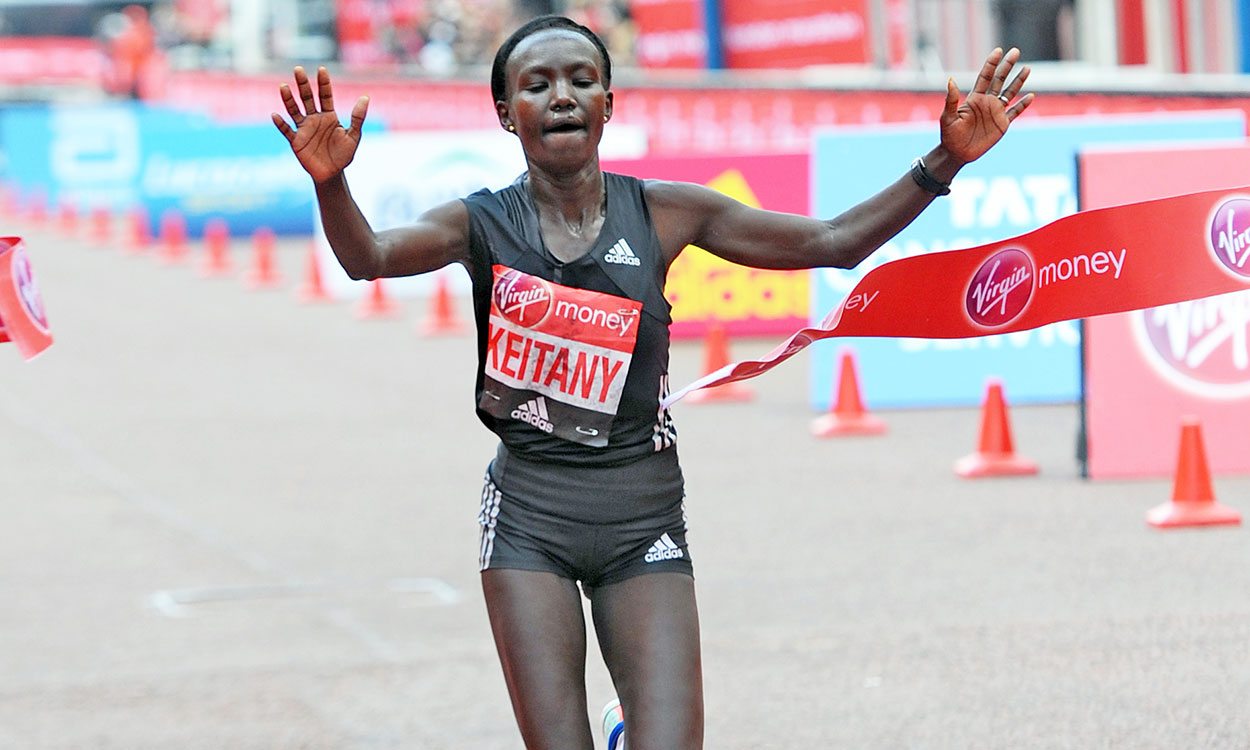 Kenyan clocks 2:17:01 to complete London hat-trick in superb style, while Alyson Dixon and Charlotte Purdue secure their spots for the IAAF World Championships

Mary Keitany again wrote her name in the world record books after a sensational run at the Virgin Money London Marathon on Sunday.

Behind her, Ethiopian track great Tirunesh Dibaba impressed in only her second ever marathon after her debut in London in 2014, coming close to the record mark herself with 2:17:56.

More than five minutes behind the top two, Ethiopia’s Aselefech Mergia clocked 2:23:08 for third, one place ahead of Olympic 5000m champion Vivian Cheruiyot with 2:23:50 on her marathon debut.

Keitany had a blistering start and had been on sub-2:11 pace through the first 5km, clocking 15:31 for that downhill section. The time on the clock was 31:17 for 10km, with Cheruiyot then in second, recording a split of 31:25 as she enjoyed a strong start to her debut.

Although her pace was gradually starting to slow, Keitany’s time at 10 miles was still 50:48 – exactly a minute quicker than Radcliffe’s time en route to her outright world record of 2:15:25 set in a mixed gender race at the London Marathon in 2003.

Continuing her incredible front-running performance, Keitany went through 20km in 63:26, and behind the pacemaker Caroline Kipkirui she was leading six athletes who remained on pace to dip under the women-only world record mark at that point.

Her 66:54 was the fastest ever half-marathon split in a marathon and kept her on course for a time quicker than the outright world record, with Dibaba, Cheruiyot, Mergia and Kenya’s 2015 world silver medallist Helah Kiprop a minute behind her.

Keitany’s time at 25km – 79:43 – was quicker than her own world record for that distance but not record eligible because of the elevation of the start of the London course. However, 5km later a world record fell as she clocked 96:05 for 30km.

Dibaba had moved into second with 97:23 on the clock at that point, with Kiprop in third a couple of seconds behind her.

While Keitany’s pace continued to slow slightly, she remained looking strong. Dibaba started to close the gap before stomach cramps in the final few kilometres tool their toll. Almost stopping to bend over in pain, three-time Olympic track champion Dibaba again picked up the pace and was 72 seconds behind Keitany at 40km, which the Kenyan passed in 2:09:38.

The two-time London champion wasn’t going to be caught and completed her hat-trick in style, clocking the best ever women-only marathon mark and the second fastest ever time.

Dibaba’s time was an Ethiopian record which moves her to third on the world all-time list.

“It was a very fast pace and I tried to follow it,” said Keitany. “The weather was really good this year. Last year it was very,very cold.

“My body felt fit enough. I have trained well and I tried to push all the time. I’m very happy with the finish time.”

Also delighted with her time was Dibaba, who said: “I’m so happy with the result and being third fastest woman of all time.

“I had stomach cramps with 2km left. I have had that problem before and I was really scared and almost vomited. It really affected my run and my desire to catch up with Mary.

“Had I not had the cramp, I would not have slowed down otherwise the pace was good and I would have continued and caught up with Mary. I’m really pleased today, I’m going to decide with my manager what to do next.”

In the race for places on the GB team for the IAAF World Championships, Alyson Dixon came out on top. Smashing her PB, the Rio 2016 Olympics marathoner clocked 2:29:06 to secure her spot for the World Championships back in the UK capital this summer and she was followed over the finish line by rising marathon star Charlotte Purdue. Her time of 2:29:23 and result as second best Brit also booked her place on the team. 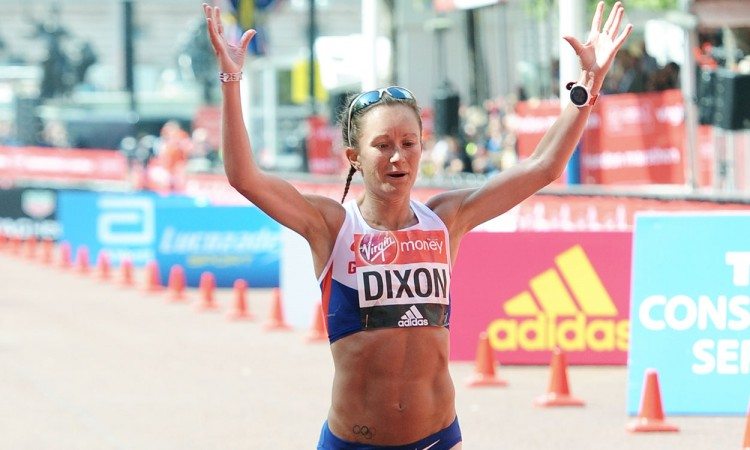 “You don’t get many days when the conditions are as good as they are today, so I just thought I’d go for it and see what happened,” said Dixon. “I’m very happy with the personal best, that’s what I always aim for. I’d have loved a sub-2:29 but that didn’t happen. I’ve defended by British title and I’ve qualified for the World Champs.”

Sadly Jo Pavey did not enjoy such success, as the five-time Olympian, who had been hoping to secure her spot to compete at a sixth world championships, was forced to withdraw around 16 miles into the race. Her coach and husband, Gavin, explained that in Pavey’s long and successful career so far it is only the second time that she has been forced to drop out.

“I’m bitterly disappointed,” the 43-year-old said. “It was always a bit of a gamble running today because I’ve had so much illness in the build-up to the event and I was a bit in the dark about how I would feel on the day.

“But my training had been consistent and I thought I would give it a go because I wanted to qualify for the World Championships in London. It just wasn’t to be on the day.

“My congratulations to Aly Dixon, Charlotte Purdue and Tracy Barlow. I still hope there is a chance to qualify for the World Championships in a different event.”