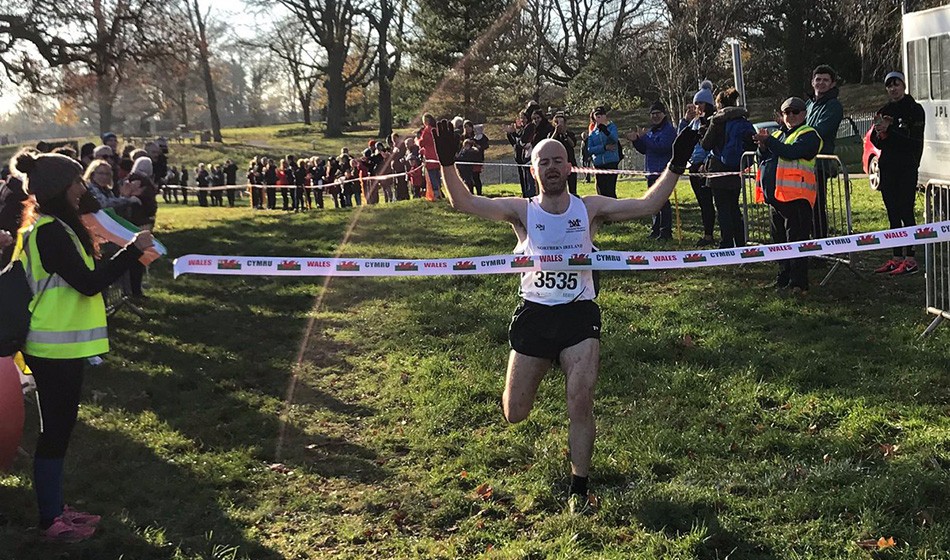 Individual honours were shared in the 31st British and Irish Masters Cross Country International at Swansea’s Singleton Park though England dominated most of the team events.

In excellent conditions, this superbly organised event featured a gruelling course which was well received by all as a true cross-country test.

England won every team event with the exception of the M75 race won by Wales, so won 16 team golds overall.

The first race off was the women’s race which also contained the men’s M65-plus races.

Ireland’s W40 Teresa Doherty ran 21:19 to win the 6km race on her debut in the event but the 16:30 5km runner this year was chased hard all the way by England W40 Kirsty Longley.

Clare Martin, who was expected to be chasing her eighth win, was a late withdrawal from the England team.

England’s Kath Bailey won the W50 event, pulling away from three-time winner Clare Elms on the final lap and clocking 22:53, with Ireland’s Carmel Crowley coming through to take second with Elms third.

Scotland’s multi champion Fiona Matheson added to her successes with her third successive victory in her W55 category in 23:15.

Despite a heavy cold which had prevented her training during the week, Angela Copson was a class apart in the W70 race as she ran 27:34 and won her 11th successive title in all age groups to match the all-time record of Ireland’s Carmel Parnell.

There was home success in the men’s M65 race with Wales’ Alan Davies running 22:35 and proving too strong on the second half for five-time winner and all-time Masters great Nigel Gates, who after focusing on triathlons, was seeking his first win since his M50 success in 2004.

England dominated the M50 plus race which was second off.

Tim Hartley, who won the M40 race on this course 10 years ago, was a class apart as he eased to his sixth success in 26:38 for a 29-second victory.

There was a good battle for second with Northern Ireland’s Steve Cairns proving too strong for England’s multi medallist Andrew Leach, with England winning the team race despite former winner Ben Reynolds having to watch the race due to injury.

The final international race was the M35-49 race. That saw a clear impressive win for front-running Mark McKinstry (pictured) in 25:10. Making his debut in major masters competition at the age of 35, having been runner-up in the Northern Ireland senior championships the last four years, he surprised his competitors with a very fast first lap and then held them at bay over the last three laps.

Wales’ M35 Phil Matthews finished strongly for second with England’s M40 Alastair Watson finishing third overall in 25:52 to take a clear win in the M40 category despite not being able to train at full capacity in recent months.

Former overall winner Chris Greenwood was making his debut in the M45 category but his challenge did not last long as he was caught from behind in the early rush and badly pulled his hamstring and had to pull out.

In his absence, the title went to a fairly new runner to the master ranks, James Skinner, in 26:25.

» See the November 22 edition of AW magazine for further coverage