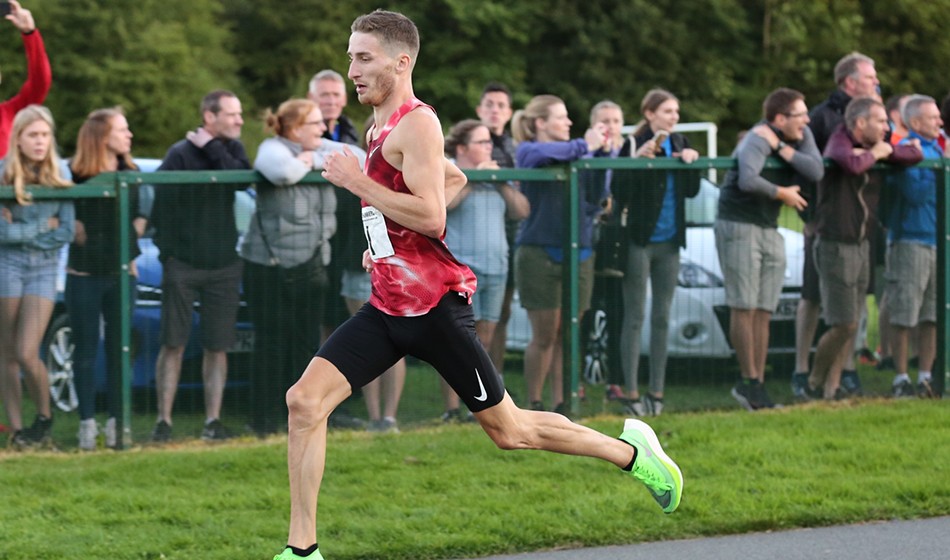 Marc Scott stormed to a British record in Barrowford on Saturday evening, clocking 13:20 to just miss the European best at the Podium 5km.

Yee’s fellow triathlete Beth Potter was also in impressive form as she won the elite women’s race in 15:24 to move to fifth on the UK all-time list.

World University Games champion Jess Judd was second in 15:36 for a time that puts her joint 10th UK all-time.

Racing on a loop course in Lancashire in blustery conditions, Scott led through the first kilometre in around 2:39 before Omar Ahmed took over at the front and led through 2km in 5:22 from Scott and Yee.

Scott was in the lead again at 3km, which he passed in around 8:03 with Yee and Ahmed close behind, and the eventual winner went through 4km in 10:43, a couple of seconds ahead of Yee.

As Scott crossed the finish line with a British record time on the clock, he also came close to the European best of 13:18 set by France’s Jimmy Gressier in the same Monaco race that Goolab had set the previous top UK mark.

This latest result continues a string of strong performances by US-based Scott, who broke the European indoor 5000m best with 13:08.87 in Boston in February.

“I’ve been with the team out in the States,” the Bowerman Track Club athlete told RunningLive, who were streaming coverage of the races.

“We didn’t change anything (training wise) because of Covid, which is good, and it’s paying off for the whole group, not just myself.”

Yee also proved that his lockdown training has been worthwhile as he beat his best time for the distance on the track (13:29.18) when finishing second.

Behind the top two, Philip Sesemann ran 13:39 to take four seconds off his PB in third, while ultra runner Tom Evans showed his form over the shorter distance, running 13:41 in what looks to be his first 5km race. His 5000m best on the track is 15:01.1 which he ran in 2017 and this Podium performance comes just a few months after a change in coaching set up to work with Andy Hobdell in Loughborough.

As further proof of his impressive range, Evans started the year with a course record-breaking win at the 102km Tarawera Ultramarathon in New Zealand and then took on a treadmill Three Peaks Challenge during lockdown, climbing and descending the equivalent elevation gain and distance of Ben Nevis, Scafell Pike and Snowdon during one continuous four-and-a-half hour effort.

Triathletes Ben Dijkstra and Jonathan Brownlee, the two-time Olympic medallist, were seventh and eighth in respective times of 13:44 and 13:46.

Over in the women’s race, Potter proved her intent from the start, leading through 1km in just under three minutes from Judd and their fellow GB internationals Verity Ockenden and Jenny Nesbitt. 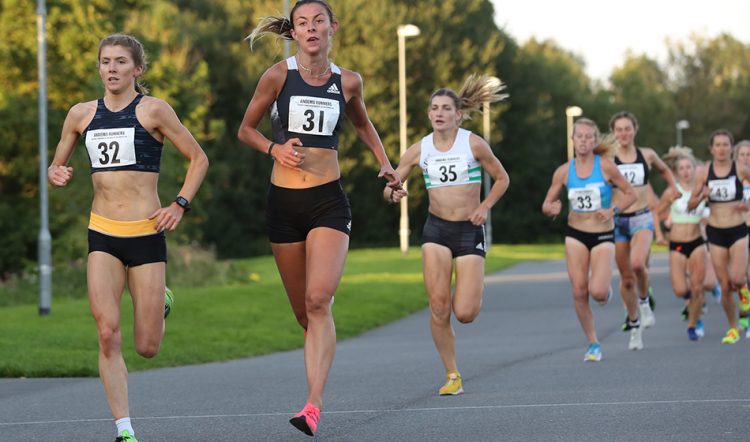 The start of the elite women’s race. Photo by Peter Brown

The group had broken up by 2km, which Potter passed in around 6:02, a couple of seconds ahead of Judd.

Potter increased that advantage to 12 seconds by the finish, with her winning time improving by one second the course record which had been set by Laura Weightman, who has been one of her training partners during lockdown.

Back with my girl gang on the track and definitely out of my comfort zone . 📷 @coopsrun

Steeplechaser Lizzie Bird secured sixth in 15:53, with Eleanor Bolton also among the seven athletes to dip under 16 minutes with 15:56.

The event featured a total of six races, with AW’s products editor Paul Freary (M50) clocking 16:13 to finish sixth in the ‘sub-17:30’ race. Full results for each can be found here, while the live streams can be watched back here.

With thanks to Steve Green and Peter Brown for photographs.