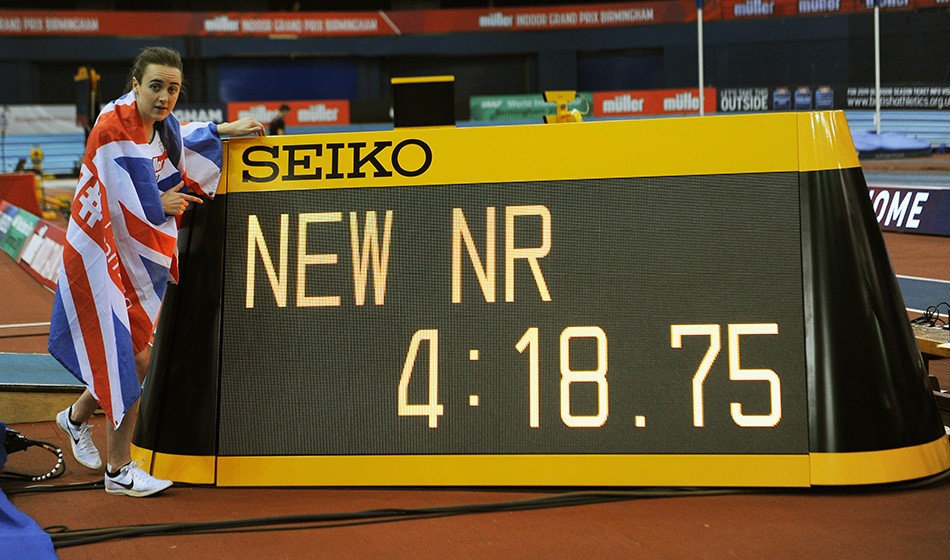 Reigning European 1500m and 3000m champion gets ready for Glasgow with 4:18 mile to go No.3 on world all-time list

Laura Muir made a strong final statement ahead of the European Indoor Championships on home soil by storming to not one but two British records in Birmingham, clocking 4:18.75 for the third fastest-ever women’s indoor mile and improving the UK 1500m mark en-route.

The reigning European indoor 1500m and 3000m champion had gone into the race with one eye on Kirsty Wade’s 31-year-old British mile record of 4:23.86 and the other on winning the race. As it was, she dominated proceedings to claim victory by over 10 seconds ahead of Uganda’s Winnie Nanyondo (4:29.40 PB) and came close to the continental and former world record of 4:17.14 set by Romania’s Doina Melinte in 1990.

“I just wanted to go out there and do a really good performance for everybody,” said the 25-year-old. “I’m really happy with that and the British record.

“I got a little bit caught off guard at the start and thought ‘oh this is faster than what I’ve done’ – I’ve not run a 1500m in quite a while! So it took a lap to get into it. I was just trying to run as hard as I could to that line. That extra 109m, you don’t think it’s much, but it is!”

British record reaction from @lauramuiruns following her 4:18.75 at the #MullerIndoorGPBham to go to No.3 on the world indoor mile all-time list 🔥. Next up, @Glasgow2019! @BritAthletics @scotathletics pic.twitter.com/bMkpTJ0lcS

The plan now is to defend both her European titles in Glasgow and she added: “I want to go there and give it my best shot and if I can come away with two gold medals I’ll be over the moon.”

Among those hoping to join Muir in Glasgow is her fellow Scot Eilish McColgan who was keen to prove her form in the 3000m after illness forced her to miss the British Indoor Championships.

She finished seventh in a 8:57.19 season’s best, with the race won by Ethiopia’s Alemaz Samuel in 8:54.60, and said: “I have two weeks in the lead up to Europeans and I need to get healthy again. If I can get back I can show the fighting spirit I have. I was so determined to show that out there today.

“I’ve medalled before there and I know I can do it again.”

Interview with @soskanclarke after her 2:01.16 season’s best for 800m victory at the #MullerIndoorGPBham as she works towards @Glasgow2019 pic.twitter.com/0O78F7Rjjg

In sixth, Mari Smith achieved the Euro Indoors qualifying mark with 2:02.34 secure her spot for Glasgow after her runner-up finish at the British trials.

Jamaica’s Stephenie Ann McPherson secured success in the 400m as she ran 52.24 ahead of Eilidh Doyle with a season’s best of 52.43. Laviai Nielsen was fourth in 52.79.