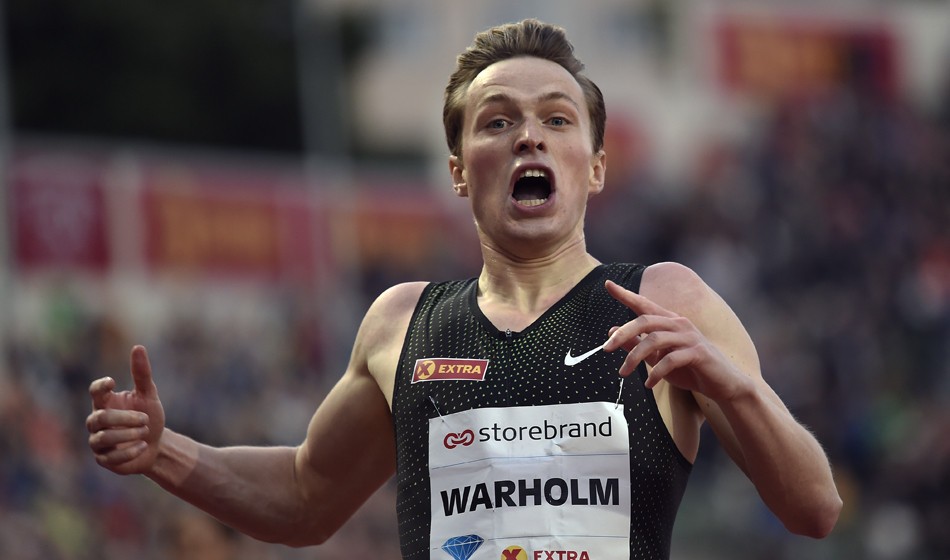 Six world leads at the Bislett Games, as Caterine Ibargüen and Christian Coleman are also among athletes to impress

A thrilling meeting in Oslo produced some stunning performances at the fifth stop on the IAAF Diamond League tour.

Although six world leads were set, the highlight was Karsten Warholm’s European record of 47.33 in the 400m hurdles. Greeted by the roar from the home crowd, the Norwegian took four hundredths off the mark set by France’s Stephane Diagana in 1995.

Since winning the world title in 2017, Warholm has been overshadowed by the achievements of Abderrahman Samba and Rai Benjamin, now the second and third fastest in history. However, with a time that puts him 13th on the world all-time list, he has shown it could be a three-way battle this year.

After blasting away from the blocks as usual, on this occasion he had the finish to match. While Kyron McMaster looked set to challenge coming into the home straight, the man from the British Virgin Islands faded to 49.12, passed also by Ireland’s Thomas Barr (49.11). Warholm’s Norwegian record had been 47.64.

The winner said afterwards: “That was unbelievable, my face said it all! I’m just so happy – it’s crazy to run a European record and it’s amazing to do it here at Bislett.

“My coach thought I would run 47.30 so he was nearly right. I’ve worked so hard during the winter with the pressure coming at me, so this is a very special feeling.”

Twenty minutes later as the final track athletes lined up, the home crowd were hopeful of a second Norwegian win. However, it was another European – Lewandowski – who surprisingly took the spoils in the historic Dream Mile.

The Pole became the first European winner of the event since 2008 as he held off the optimistically quick first 800m of 1:53.04.

Coming from nowhere in the home straight, he stopped the clock on 3:52.34 as Kenya’s Vincent Kibet was four hundredths back.

Just as in the 1500m at the European Indoors this year, Jakob Ingebrigtsen was shocked by Lewandowski. Off such a quick start he faded to 3:53.04 for sixth, more than a half a second outside his PB.

After winning with just 1.92m in difficult weather conditions in Stockholm, Lasitskene was back attempting more familiar heights. Her 2.01m put her top of the world rankings and guaranteed her a 20th Diamond League win. Erika Kinsey of Sweden was second with 1.96m.

Morgan Lake’s outdoor season started with just 1.85m for seventh as she had three failures at 1.88m.

In the 100m, Christian Coleman took a hundredth off the world lead he shared with Noah Lyles. The American was a class apart as he ran 9.85. Xie Zhenye of China was second with 10.01 and USA’s Mike Rodgers third with 10.04. 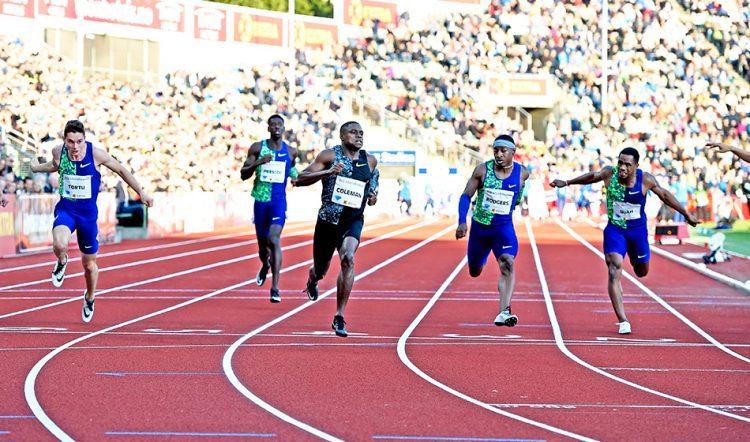 GB’s CJ Ujah ran 10.18 for sixth, one place ahead of compatriot Tommy Ramdhan’s 10.28. The third Brit, Reece Prescod, pulled up with an apparent injury and eventually crossed the line in 10.76.

“I’m pretty excited about it, it was a good run and a pretty good time – now I’ll look back at the video and critique it,” said Coleman. “It wasn’t ideal conditions but the crowd made it exciting and I came out for the victory.”

Henrik Ingebrigtsen took nearly four seconds off the Norwegian record with 7:36.85 for fourth. Britain’s Andy Butchart was 10th with 7:43.57 – just over six seconds outside his PB.

Jeruto took a surprise win over world record-holder Beatrice Chepkoech in the steeplechase. She had the better finish as she stopped the clock on 9:03.71 as Chepkoech ran 9:04.30. In 14th, Britain’s Rosie Clarke took four tenths off her PB with 9:31.68.

Ibargüen found her form in the fifth round of the triple jump with a world lead 14.79m to take her 36th career Diamond League win. She had found herself behind Keturah Orji of USA, who jumped 14.53m in the second round. 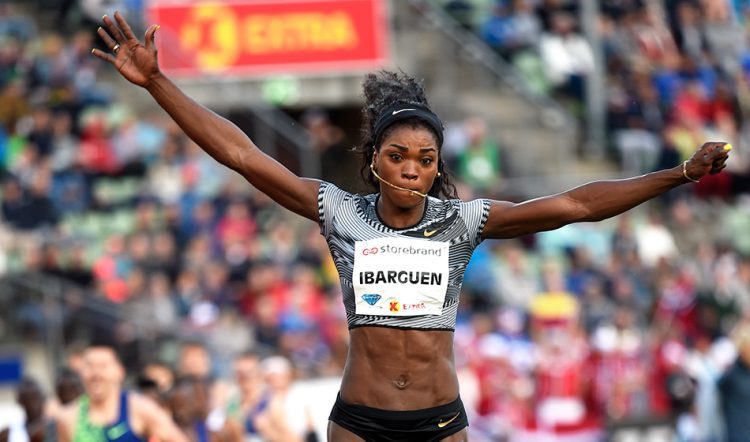 World junior record-holder Sydney McLaughlin, competing in her first 400m hurdles in the Diamond League, produced a stunning finish to claw back the lead of world No.1 Dalilah Muhammad.

The winner, who hit the first hurdle badly, clocked 54.16. Muhammad, who led off the final hurdle and seemed a certain winner, clocked 54.35 for second. Meghan Beesley, who received a late call to take a lane here, was eighth in 57.13.

Christina Clemons capitalised after a false-start disqualification for Olympic champion Brianna McNeal in the 100m hurdles. The American clocked 12.69 to win from runner-up and compatriot Sharika Nelvis (12.74).

Puerto Rico’s Ryan Sanchez, who was second in Stockholm, finished well to win the men’s non-Diamond League 800m in 1:46.34.

World champion Dafne Schippers comfortably won the 200m with a season’s best of 22.56.

Johannes Vetter’s 85.27m in the first round of the javelin proved enough to win despite his retiring with a leg injury in the third round.

With 5.91m, world champion Sam Kendricks won the pole vault as world No.1 Armand Duplantis was just fourth with 5.81m.

Uganda’s Halimah Nakaayi won the 800m with 2:01.93. European indoor champion Shelayna Oskan-Clarke was seventh in 2:03.45. Her fellow Brit, Lynsey Sharp, was tripped and failed to finish.

Another non-League event, the women’s javelin, was won by Australia’s Kathryn Mitchell with 56.07m.