Coverage of the South and Midlands Relays can be found here.

Stuart Bladon won the senior boys’ decathlon with a score of 6468 points as the other medallists Adam Booth (6367) and Luke Cressey (6112) both set PBs.

Sammy Ball, who was seventh last year and is the England octathlon champion, won the junior boys’ pentathlon with a PB score of 3356 points with Jake Minshull (3243) and Jacob Blanc (2992) the other medallists.

Erin Lobley won the junior girls’ pentathlon comfortably with 3241 points as Seren Rodgers’ PB got her second place with 3096 and Grace Colmer was third with 3062 points.

Ella Rush won the under-17 heptathlon with 4978 points as Rebekah O’Brien finished second with a PB 4852 with Katie Chapman also improving her best score with 4625 points.

Emily Race went one place better than last year to win the senior girls’ event with 4910 points ahead of last year’s intermediate champion Jessica Hopkins who set a PB of 4789 points while Emily Tyrrell won bronze with a score of 4764 points.

Emily Tyrrell clocks 14.98 (-3.8) in the sprint hurdles in bright and breezy conditions in the senior girls heptathlon as the English Schools Combined Events & Race Walks Champs in Exeter gets underway. @SchoolAthletics pic.twitter.com/0PsyXSDfOj

There were victories for Rob Payne and Jo Newens, Adrian Stott reports. 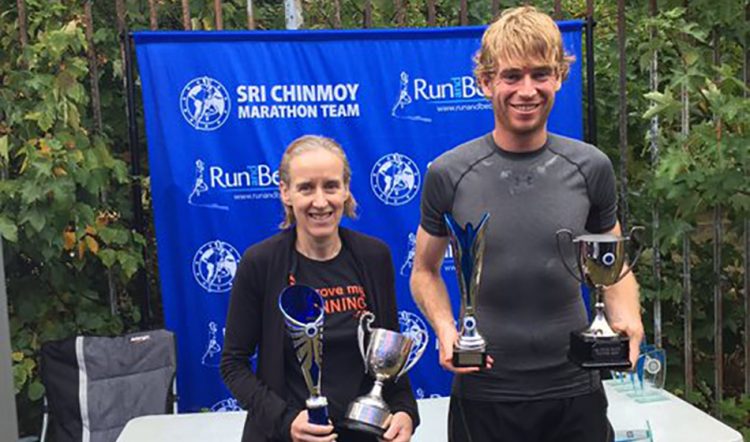 In so doing he achieved the men’s individual British Athletics guideline qualifying standard for 24 hours of 250km.

In all, 31 runners from 48 starters bettered the 100 mile barrier, a record for the event.

Britons took four of the first six places with Scott Beattie second and Patrick Dever third, both in 24:22, while Isaac Akers was fifth in 24:26 and Cameron Field sixth in 24:36.

In fifth, Derlys Ayala from Paraguay won the South American title in 2:10:31.

Marta Lema took more than a minute off the course record in 2:24:31.

Kenya’s Irene Cheptai was second in 50:35, while Dagnechew Selamawit of Ethiopia was third in 50:48.

Elaine Livera was the first woman in 37:41, ahead of Anna Watkinson-Powell who was second in at 38:01 and Hannah May Fletcher who finished third in 38:33.

Lauren Deadman was the first woman in 79:03, with Sophie Delderfield second in 82:21 and Alice Heather-Hayes third in 87:40.