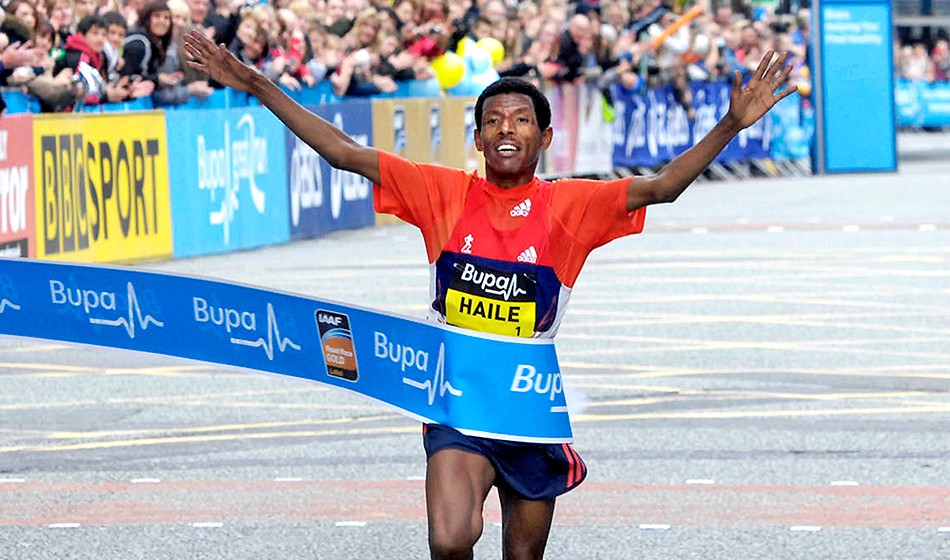 From Haile Gebrselassie to Mo Farah and Tirunesh Dibaba to Kenenisa Bekele – the Great Manchester Run roll of honour is an impressive one.

In its 17-year history, the winners in Manchester have amassed more than 70 world titles on the track, road and cross country between them.

Interestingly, the men’s course record-holder, Micah Kogo, has never won a global title, although the man who ran 27:24 in 2007 is the former world record-holder for the distance.

As for the women’s course record-holder, Tirunesh Dibaba has won the event five times, a record she shares with Gebrselassie in the men’s event. 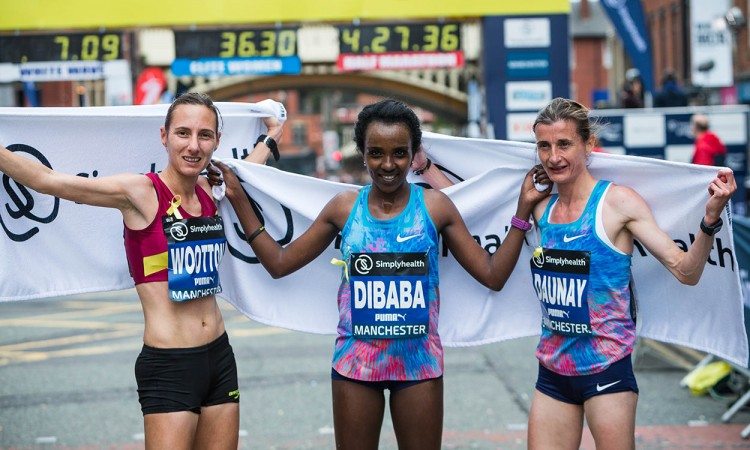 Tirunesh Dibaba after her 2017 win. Photo by Dan Vernon

In 2003, the inaugural year of the event, Berhane Adere and Derartu Tulu fought a magnificent battle at the head of the field – which went almost to the wire. The pair of Ethiopian powerhouses trumped the hopes of Sonia O’Sullivan, the only opponent to really offer any real opposition, with Adere winning in 31:50.

Paul Tergat ran a perfectly controlled race to take the men’s title in 28:48.

In 2004 O’Sullivan, with a blistering sprint finish, scored a major upset when outpacing Adere by three seconds, while Australian Craig Mottram used his own powerhouse tactics later to finish in 27:54.

It was 2005 when the ‘Emperor’ Gebrselassie came to town. He came, he saw and he conquered – much as you would expect – as he put on a breathtaking show around the streets of Manchester to set the course’s fastest time of 27:25.

Lornah Kiplagat’s performance might have been overshadowed by the great Ethiopian, but the world cross gold medallist clocked 31:28 ahead of Jelena Prokopcuka.

In 2006, Zersenay Tadese and Adere were rewarded with Eritrean and Ethiopian records. Adere, the inaugural race winner, regained the title when achieving an event record of 31:07.

The men’s race was just as spectacular – the three top finishers also breaking the Eritrean, Tanzanian and Ugandan records, although Gebrselassie’s UK all-comers’ mark of 27:25 survived.

Tadese’s fierce burst of finishing speed carried him to the second fastest-ever 10km seen on British soil, when holding off the challenge of Fabiano Joseph and Boniface Kiprop. Joseph survived until Tadese unleashed a fabulous sprint 400m from the line, to win by five seconds in 27:36.

Behind him defending champion Tadese also beat the Ethiopian’s mark by a second.

Pavey roared to a personal best of 31:47 to win ahead of Hungarian rival Aniko Kalovics, before repeating it a year later.

That men’s race saw Gunther Weidlinger win in a surprisingly all-European podium, ahead of Ukraine’s Sergiy Lebid and Mustafa Mohamed from Sweden and crossing the line in 28:10.

Gebrselassie easily won a second Manchester title after his victory four years earlier in 27:39 ahead of Ali Zaied of Libya and Lebid.

Cheruiyot, who had her eyes on Paula Radcliffe’s UK all-comers’ mark of 30:38, also saw her opportunity wrecked by the elements, coming home in 32:01.

Gebrselassie stormed to his third success in 2010 but again was thwarted by a strong wind, which this time restricted him to a time of 28:02.

Gebrselassie’s fellow Ethiopian Worknesh Kidane, in her first international 10km, won in a fast and personal best time of 31:19.

In 2011 Gebrselassie and Britain’s Helen Clitheroe despatched their talented rivals to minor positions with ruthless performances.

Gebrselassie convincingly dismissed the challenge of young British pretender Chris Thompson with 2.5km of their encounter remaining to win in 28:10.

Clitheroe surprised even herself when becoming the first Briton to emulate the 2007-08 successes of Pavey to score a convincing victory in 31:45.

Gebrselassie earned his fifth and final Great Manchester Run crown in 2012, storming to victory in 27.39, despatching Tsegay Kebede and Ayele Abshero to the minor podium placings.

Linet Masai also dominated her race with her conclusive victory 17 seconds ahead of Italy’s Nadia Ejjafini in a time of 31:35.

There would be no more wins for Gebrselassie, but in 2013 the then 40-year old finished an impressive third to add a world masters record to his roll of honour.

Moses Kipsiro was the outright winner, in a sprint finish ahead of Wilson Kipsang, while Tirunesh Dibaba claimed the women’s title with a course record. Dibaba triumphed by over a minute ahead of Prokopcuka, the 2005 runner up, and Christelle Daunay, who placed second two years before.

Kenenisa Bekele took the honours in Manchester in 2014, as the 33-year-old moved into the next phase of his career. Dibaba, meanwhile, was 20 seconds slower on her 2013 time but still managed to take the women’s title. 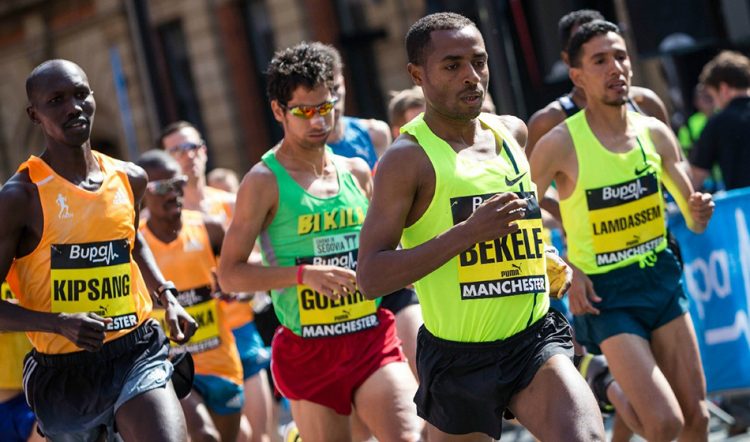 Photo via The Great Run Company

In 2015, it was a double victory for Kenya, as Stephen Sambu took victory with 27:30, the fastest time since Kogo’s record- breaking win, while Betsy Saina led the women home in 31:49.

The 2016 event saw Olympic champions Bekele and Dibaba take victory in Manchester once more. Bekele held off Kipsang to win the men’s race, while Dibaba was triumphant on her first return to racing since the birth of her son.

The next two years saw two more wins for Dibaba. In 2017 she clocked 31:03 to win ahead of France’s Christelle Daunay and Britain’s Katrina Wootton, while in 2018 the Ethiopian won ahead of Kenya’s Joyciline Jepkosgei, claiming victory in 31:08.

While the 2020 event is no longer taking place on May 24 as originally planned due to the coronavirus pandemic, the event – which features the 10km as well as a half-marathon – is set to return later in the year on a new date of September 6.