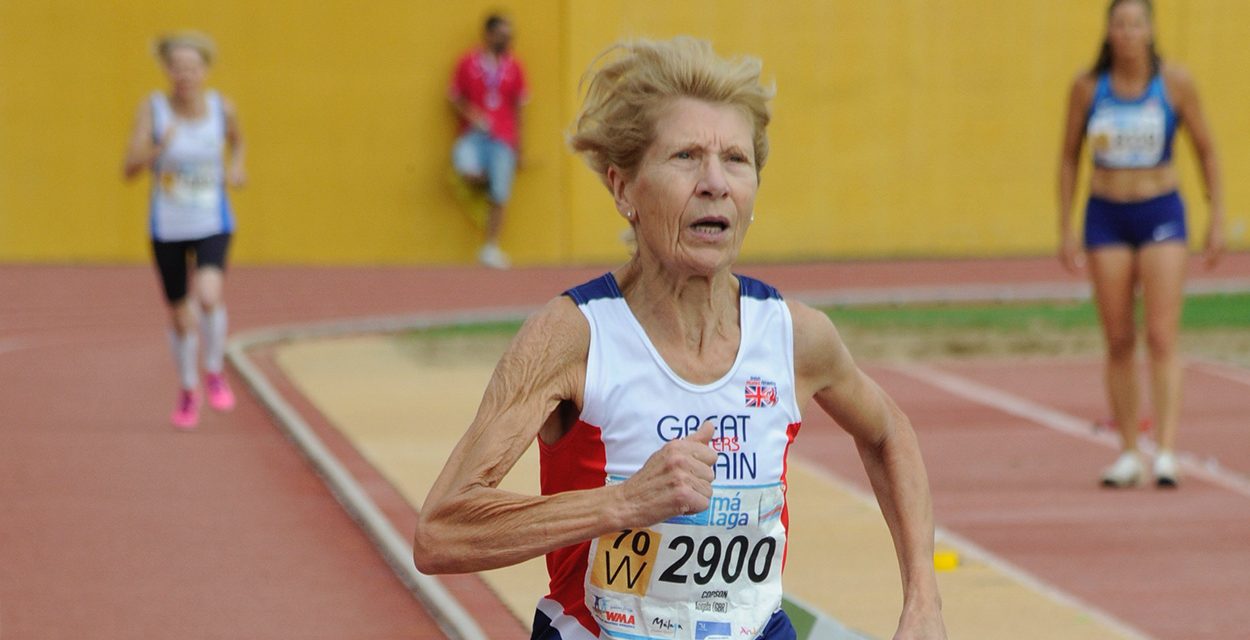 On a world record-breaking weekend (read our report on Eliud Kipchoge’s incredible marathon mark in Berlin here and Kevin Mayer’s decathlon domination in Talence here), there were some other impressive performances in Copenhagen, Malaga, Andorra and elsewhere.

The Great Britain team finished with a flourish to pip Spain at the head of the medals table, with a single silver medal making the difference as their women led the charge.

There was a sense of déjà vu at the start of the second week as Evaun Williams took her third world record and Angela Copson (pictured) kept winning.

Copson was then pleased to run a 79.27 UK record in the 400m heats before improving further to win the final in a European record 77.47 for her fifth title.

On the final day of the championships, the now 71-year-old was only a second outside her world record when taking the 1500m in 5:48.07, with Dockery pocketing yet another bronze.

Williams broke the W80 British javelin best by more than 4 metres with 28.06m for silver, her fourth medal of the meeting. Then added her fourth gold in the weight pentathlon with a world record 6080 points where her 37.85m hammer throw further improved her world best from last week.

Another British record came when Steve Peters completed his M65 sprint treble in 59.09. He played down his performance, saying: “It ended up being a steady championships: get around safely and win.”

In the high jump, Canada’s Carol Lafayette-Boyd improved her own W75 world record to 1.24m before adding the long and triple jumps with 3.78m and 7.98m, both against a stiff breeze.

Back on the roads, Kenya’s former 60:20 runner Silas Sang (M40) took overall half-marathon victory in 67:22. In the M60 race, Paul Mingay’s 81:24 headed Jon Cross by just a couple of ticks as they also picked up team golds as did the M65s through second and third Andy McLinden and Paul Whelpton.

Elsewhere, there were six other silver medals for the Brits, among them Emma Stepto and Martin Ford, as Susan McDonald’s 88:18 bronze helped the W50s also take the team.

Seriously attempting the distance for the first time, Sifan Hassan broke the European half-marathon record, clocking a course record of 65:15 to move to eighth on the world all-time list.

Sifan Hassan's splits in the Copenhagen Half Marathon:

Uganda dominated the World Mountain Running (uphill) Championships in Andorra. The African nation swept the medals in the men’s race as Robert Chemonges won from Joel Ayeko and Victor Kiplangat.

Uganda also swept the medals in the junior men’s race as Dan Chebet won from Mathew Chepkurui and Oscar Chelimo.

Joseph Dugdale was fourth in the under-20 men’s race, leading his GB team-mates Matthew Mackay in seventh, Jack White in 11th and Euan Brennan in 29th to team silver.

Emily Collinge was the first British athlete across the line in the senior women’s race, finishing in seventh place ahead of Sarah Tunstall in 10th, Emma Gould in 22nd and Bethany Hanson in 51st on her British team debut as the GB team secured silver.

Portuguese club Sport Lisboa e Benfica won the 2018 European Champion Clubs Cup for under-20 men in Castellon, while Fenerbahce of Turkey took the under-20 women’s title.

Stephen Kiprop, 19, won over 13.1 miles in the Czech Republic in 59:41 in windy, warm conditions as fellow Kenyan Diana Chemtai Kipyokei won the women’s race in 67:17.

Henry Pearce from Tonbridge AC won the men’s half-marathon in 66:02, ahead of Andrew Rooke from Framlingham Flyers who crossed the line in 67:31. They were followed by Ipswich Triathlon Club’s James Reeder in third with a time of 74:19.

Ipswich Jaffa Running Club’s Helen Davies took first place in the women’s field in a time of 77:10 followed by Daisy Glover from Newmarket Joggers in 79:14 and Rebecca Smith in third in 92:45.

With an increased entry limit, 3500 participants of all abilities took on the sold-out half marathon event.

Boston Marathon champion Des Linden ran 71:50 to win the women’s half-marathon from Kellyn Taylor in 72:07 and Roberta Groner in 72:22.

» Further coverage and results in the September 20 edition of AW