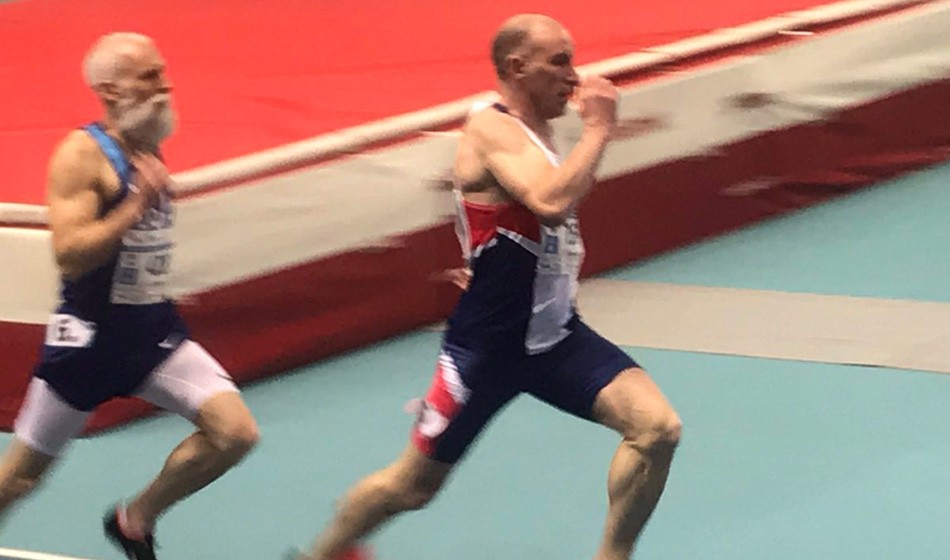 The 400m races took centre stage in the stadium on Tuesday evening at the World Masters Indoor Championships, with over two hours of two-lap races from the M85s to the W35s.

In the field, Evaun Williams won the W80 weight title with an impressive world record of 12.75m.

Tilt made his move at 200m in 26.49 to ease past bearded American David Pitts on the inside and then repelled all challenges on the last lap to stay strong and win in 55.17 from Canadian Michael Sherar’s 55.63 and Pitts’ 55.66.

Copson won her third gold in three days as she took on Kiwi Sheryl Gower.

Gower blasted the first 200m in 38 seconds, well over 10 metres clear of the Briton, but began to slow and Copson closed up at 300m and then waited behind before unleashing a strong sprint in the straight to win in 80.70 to Gower’s 82.55.

European indoor champion Mitchell was up against Sue McDonald who had set a 64.50 US record in the previous day’s heat ahead of her but this time Mitchell  went out aggressively and controlled the race while McDonald clashed with Sigrid Gutierrez of Costa Rica at the break and lost ground.

Mitchell pulled further away in the straight and won impressively in 63.21 – her fastest indoor time for three years.

Gutierrez was second in 64.14 while McDonald improved her record to 64.38.

Mitchell was exactly a second outside Caroline Powell’s world mark and Powell was involved in one of the best quality races so far in Torun.

In the heats, Powell had set a world record 69.77 though her great rival Karla del Grande of Canada, the world outdoor champion, ran 69.98, inside the old mark, in the next heat.

In the final, Powell and Del Grande were level at the break but the Canadian forged ahead and sped past 200m in an extravagant 31.35 with Powell close behind.

The Briton attacked along the back straight but Del Grande repelled the challenge and then held strong in the straight. Though the second lap was well over six seconds slower, the Canadian still took well over a second off Powell’s new mark with 68.39.
The Briton though was also well inside the record and her 68.94 was a European and British record.

There was also a bronze for Joylyn Saunders-Mullins in 72.91 behind her GB team-mate Powell.

GB were perhaps fortunate to gather two medals from the W50 400m.

As they entered the straight, Joanne Flowers was a distant fourth but the two Spanish competitors Maria Carabante and Esther Colas clashed in the straight and both fell. Carabante was able to crawl across the line but only after Flowers had passed the pair to take silver in 62.82.

However, Carabante was adjudged to have fouled her opponent and was disqualified and bronze thus went to Jacqui Hodgson in 65.12.

Apart from Tilt’s gold, British men won five other medals at the event.

Britain had looked for a better medal in the 400m but Richard Beardsell overdid his first lap of 23.00 and tied up in the straight and faded to fourth in 50.69 as Spain’s Ricardo Menendez Gonzalez won in 49.98 though GB still won a medal as David Brown paced himself better and passed his compatriot to take third in 50.36.

Adrian Essex picked up a M65 bronze in 65.07 after two of his opponents were disqualified.

In the M50 400m, Britain won two more medals. Michael Gardiner pulled a hamstring on the first lap but both Mark Ward (54.04) and Dominic Bokor-Ingram (54.12) finished strongly and took the minor medals behind Andrew Wilcox of Australia’s 53.44 after Germany’s Bernd Lachmann blasted a suicidal 24.23 first lap but took over 31 seconds for his second and faded to fifth!

One of the most impressive winners of the event was multi world record-holder Charles Allie who won in 60.48, though the world records went to Mongolian M85 Radnaa Tseren who won his 400m battle with Japan’s Hiroo Tanaka in 80.65 and Spain’s Marcos Bermejo of Garcia’s M90 win in 1:43.08.

In the field, the British highlight was predictably provided by Williams, who bettered or equalled the listed weight record with all six of her throws.

The 81-year-old’s best of 12.75m came in round five as she won gold by over three metres from Mongolian Tserendolgor Tumurbat.

Another world record-equalling mark was achieved by Christa Bortignon of Canada who won the W80 long jump with 3.28m.

In the 60m heats, Claire Spurway equalled the British W40 record with 7.96.