From the AW archive: The fastest race in history 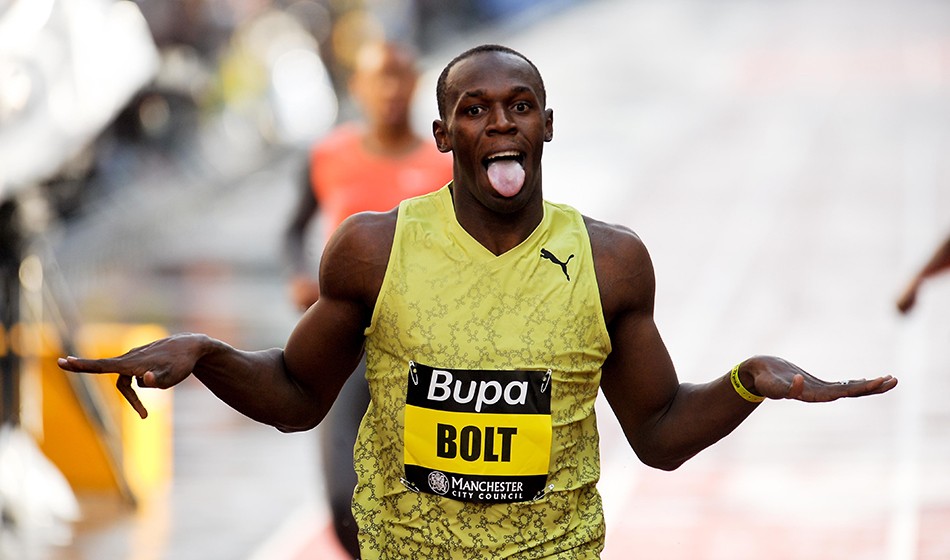 Statistics show that Usain Bolt was never quicker than during his 150m at the 2009 Great CityGames Manchester. Here’s how we reflected on one of the greatest moments in athletics back in 2018

On a damp day in Manchester in May 2009, Usain Bolt took to his marks looking for little more than a solid season’s opener. The Olympic sprints champion had recently returned to training after a car crash and was competing over the unusual distance of 150 metres on a temporary track that had been built on Deansgate in the city centre. As rain spat down from the leaden skies, thousands of spectators armed with brollies gathered under the drizzle to watch the inaugural Great CityGames for free.

It was an unlikely setting for what would become the fastest footrace in history. Measuring the average speed in miles per hour from gun to tape, in legal wind conditions of less than 2m/sec, no one has ever managed a quicker average speed.

Such was Bolt’s ability that day, he even recovered from a stumble out of the blocks to produce pure street theatre as he stormed to victory over Marlon Devonish – the Briton finishing almost a full second behind the Jamaican, with Ivory Williams third and Rikki Fifton fourth.

“The event in Manchester was a lot of fun and something new and different for me,” Bolt told AW, as he remembered the race ahead of the 10th staging of the Manchester CityGames.

“Training was very good over the winter and spring but it was just a few days after a car accident where I injured my foot so I didn’t have the best preparation.”

The Jamaican, who retired from the sport in 2017, added: “I remember the weather was really bad and there was no warm-up area, so I ended up warming up in a small VIP area inside a building. Then when we went down to the track the sun came out and I was able to do a few strides on the track.”

Max Coleby was working for the organisers on that drizzly day and was in charge of making sure athletes were on the start line promptly so that BBC television’s coverage would run on time.

“It’s a stressful job as there is not much time between races and a faster turnaround to most other track and field meetings,” Coleby remembers. “I was so busy focusing on each race I just glanced up and thought ‘okay, Usain Bolt – he’s with the next lot!’ as I had the women’s 150m first.”

Coleby says the fact it was the inaugural CityGames together with Bolt’s presence and the rainy weather made it a “surreal” experience. He adds: “I offered them the chance to sit in a tent before the start to stay dry. So as soon as I lined the women up, I had Usain Bolt, Rikki Fifton, Marlon Devonish and Ivory Williams all sitting there.

“I told them that as soon as they heard the gun for the women’s race they had to get their blocks sorted out quickly and I said I’d give them three strides as a final warm-up.”

Coleby remembers there being a puddle in the exact spot where Bolt’s first footplant was likely to be and he asked a colleague to quickly get a brush to sweep it up.

“Meanwhile Usain was further down the track doing his lightning Bolt gestures probably only about 90 seconds before the race was due to start,” Coleby recalls.

“He walked back down the track toward the start high-fiving spectators and I said ‘I need you now!’ At that point his whole demeanour changed and he just looked at me and said ‘okay, boss’. He was completely professional and gracious.”

As Bolt settled into his blocks, the crowd hushed as he prepared to blast away. The Jamaican has never been renowned for his starting ability, though, and when the starter, David Brown, fired the gun Bolt lurched forward, almost falling.

The world best of 14.8 held by Pietro Mennea, the Italian who won the 1980 Olympic 200m title and held the world 200m record for almost 17 years, was obliterated. It also eclipsed the 14.99 that Donovan Bailey ran when racing Michael Johnson at the Toronto SkyDome in 1997.

What’s more, there was no doubt about Bolt’s run being ratified as the organisers had gone to great lengths to ensure it fulfilled the IAAF’s strict criteria.

The athletics world reacted with awe at Bolt’s performance, while Manchester City Council and the BBC not surprisingly applauded the CityGames concept. The Jamaican’s big breakthrough had come the previous year when he set a world 100m record in New York before winning his first Olympic 100m, 200m and 4x100m titles in Beijing. But his 150m at the Manchester CityGames showed he was faster than ever.

Runner-up Devonish said: “Usain is simply in a different league right now,” whereas I wrote in AW at the time: “Perhaps this proves the 150m is the optimum distance when it comes to an athlete’s ability to hit top speed. The 100m is arguably too short, with athletes struggling to get into their stride after a crouched start. The 200m is too long, with loss of form due to tiredness.”

Enthused by the idea of a 150m race in a city centre setting, I added: “Rarely run until now, there is now a strong argument to make the 150m sprint a more regular feature on the athletics circuit. The most popular footrace during the ancient Greek Olympics, after all, was the stadion – a sprint over a distance of around 180m.”

Brown, one of the nation’s most prominent athletics officials, says: “I remember it raining all day and the anticipation of the crowd. When Usain came out for a final run through before the race the rain stopped as if by magic.

“I had been with him the day before when he was the guest at the Great Junior and Mini runs which I also start. He sneaked up behind Roy Gale, who was leading the warm-up, and started doing alternative moves, much to the delight of the children. He was then supposed to come to the start podium but went missing, but I eventually located him in the middle of the athletes chatting away to the runners.”

“Someone told me later on what Bolt ran and I thought ‘holy shoot, that’s fast’,” Coleby recalls. “Later that year he ran his world records for 100m and 200m in Berlin. He had never run as fast up to that point and never ran as fast again. We just managed to get him when he was at the peak of his career in Manchester that year.”

Andy Caine was working as elite project manager for the organisers and remembers negotiating the deal with Ricky Simms of PACE Management for Bolt to race in Manchester in January – five months before the event. Caine recalls: “At the Boston indoor meet in February I remember a manager saying ‘you’ll never get anyone to run that meet in the streets!’ Already knowing I had Bolt, I couldn’t say anything.”

Caine adds: “On April 29 – three weeks before the race – Bolt crashed his car in Jamaica. I spoke to Ricky on the morning of April 30 and he said ‘let’s see how he feels’ as he had to get thorns cut out of his feet.

“Coach Mills cancelled all of his racing calendar, but Bolt refused to listen as he wanted to meet Man Utd on the same CityGames weekend!

“Then, in Manchester itself, Bolt joined in training at United’s Carrington ground on the eve of his race and he must have fallen at least three times on his backside kicking balls around. But the Man Utd stars – Wayne Rooney, Cristiano Ronaldo, Rio Ferdinand, Ryan Giggs etc – were more in awe of Bolt than vice versa.”

Caine continues: “On the day of the race the weather started okay but deteriorated by midday. Bolt’s fellow athletes raced the afternoon heats and one pulled up with cramp. He complained to Bolt and told him not to race, saying it was too cold.

“Ricky and I had to persuade him that all would be fine. I even said the weather would clear up. He agreed to run and as he walked out on to the track the sun broke through the clouds – it was divine intervention!” 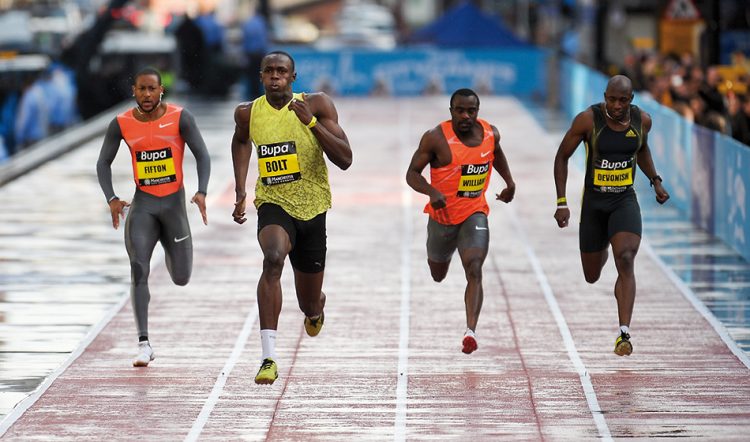 Bolt’s performance in the race showed why the Manchester United players were so in awe of him as he produced the fastest race in history.

Moments after finishing, he said: “I came here in good shape as my coach Glen Mills wouldn’t let me come otherwise,” whereas when it came to the Manchester monsoon conditions, he added: “I’m used to the rain as it’s like this in most European races I do!”

Amusingly, Bolt also revealed he’d miscalculated the length of the race. “My agent told me to finish at the clock,” he grinned. “So, I actually ran further than I needed. I slipped at the start so I could have run faster.”

All in all it was a memorable weekend for Bolt. After training with Manchester United, he watched his team seal their third successive Premier League title after a 0-0 draw against Arsenal at Old Trafford. Then, in the CityGames itself, he brought his own special brand of greased lightning to the city.

“I arranged a post-event party with a local Jamaican tourism travel company in one of the city’s clubs,” says Caine. “It finished at 5:30am with Bolt on the DJ decks. We then had to get him in a taxi at 6am to the airport!

“He left happy and his phone was full of texts from the Man Utd players congratulating him on his new world record.”

Looking back now, Bolt says: “There was a good crowd and I wanted to give them something to cheer after standing in the rain. In the end it all worked out, I won, broke the 150m world record and got to see Manchester United.”

» Click here for more in the ‘From the AW archive’ series