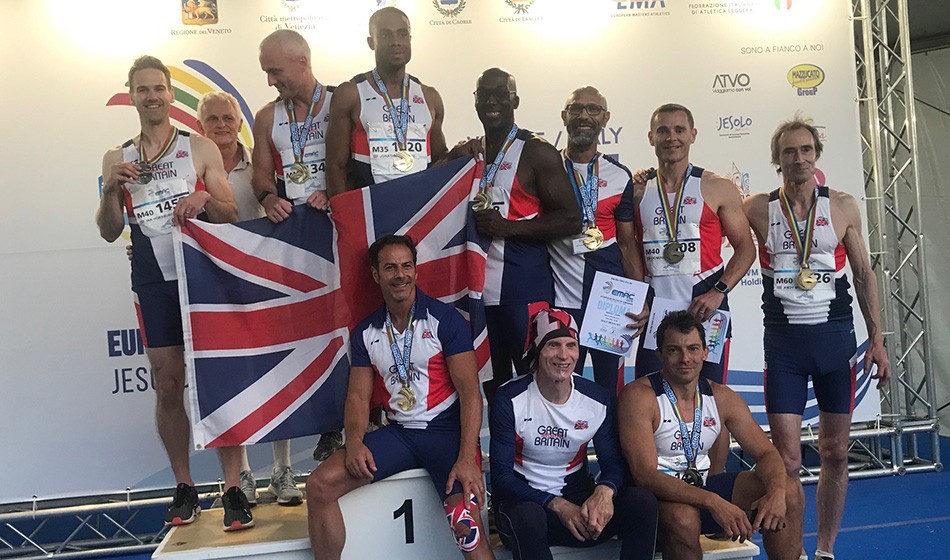 Britain excelled on a busy day of competition at the European Masters Championships in Venice with what is believed to be a record in one day as they won 20 titles, dominating the 200m and sprint hurdles races by winning eight golds in each to equal the 1500m runners’ tally. They also claimed three steeplechase golds and a discus title.

The hurdlers started the ball rolling in the morning as they had the rare privilege of both genders participating at the same venue and they rose to the occasion, winning eight golds and also having some near misses too to equal the gold count at the 1500m.

The highlight was the M55 100m hurdles where Don Brown won in a British record 14.62 (-1.9m/sec) but he was pushed all the way by team-mate Barrie Marsden who was also inside Brown’s previous mark. Two other Britons, Neil Tunstall and Glen Reddington, made the top five.

Others to succeed at the longer hurdles and gain a second gold were W60 Jane Horder and W55 Julie Rogers.

Joe Appiah retained his title but not without incident as he pulled his hamstring at the third hurdle after a fast start and though slowing he was just about to hold off European record-holder Thomas Keiler, with 15.44 (+1.1) to the Swiss athlete’s 15.56.

Dave Awde looked to be on his way to a certain M35 110m hurdles gold but clattered a late hurdle and lost momentum and though he got across the line he was later announced as being disqualified for knocking over a hurdle deliberately.

Just missing out was M70 Tony Wells. In a blanket finish he was adjudged to have lost by a few thousandths of a second though he did share the winning time of 14.09 with Poland’s Marek Mielcarek.

M75 defending champion Barry Ferguson has a knee problem and had to virtually walk across the line in sixth in 34.61 (-0.8)

Arguably the best hurdles performance came from Italy’s Arasmas Diaz who won the M40 event into a strong 2.8m/sec headwind in 14.37.

The 2000m steeplechase also saw some GB success. In the women’s combined W45 and W50 race there were two gold medals. In an exciting last lap with six close together at the bell, it was the crucial last water jump clearance that gave Lisa Thomas the win and W50 gold by over three seconds in 8:03.48. Thomas had medalled at 300m hurdles earlier in the week.

Close behind, and ahead at the water jump, was Ana Ramos-Villaverde who won the W45 title by less than two seconds in 8:06.72.

World champion Alex Swiecicki also struck gold with a clear win in the M70 race in 8:24.26.

The Polish-born athlete first steeplechased over 50 years ago and was originally in the same club as 1980 Olympic champion Bronislaw Malinowski.

His time took 19 seconds off his own British record set when winning gold in Malaga last summer and he won by an astonishing 65 seconds.

The first to win 200m gold was M80 Anthony Treacher, who won his second gold to go with the triple jump.

Next to strike gold was Britain’s greatest ever masters sprinter Steve Peters who completed the sprint triple and kept his winning record going – he has won 39 consecutive European sprint titles since first coming to prominence in 1994.

300m hurdles champion Ian Broadhurst won his second sprint medal with third in 26.82 as Britain had four of the first five.

The most dominating sprinter, and probably the best age for age in Italy, is John Wright.

It was his quickest electrical time since winning the 2014 European M55 title in Turkey.

Britain were now on a roll and hurdles champion Brown, in his third race of the day after also running a 200m semi, found it hard in the last 50 metres but he held on to win impressively in 24.06 (-1.1) from Germany’s Roland Groeger’s 24.22.

The golds kept coming as M40 Guiseppe Minetti won but it was close. Having a big lead, he tied up in the last 30 metres and winning in 24.25 (-0.8) as Lachmann Bernd and two other Germans all finished within 0.07 of him and in a blanket finish, he did not know he had won until 20 minutes later.

Next off and making it five on the trot was M45 world indoor champion Mike Coogan and he dominated his race to win by three metres in 23.21 (-0.8) with Ciaran Harvey picking up another GB bronze in 23.78.

The streak ended in the M40s but only just as 100m champion Lion Martinez of Sweden just caught Ian Horsburgh on the line with both timed at 22.62 (-0.8).

Jonathan Browne regained the dominance in the M35s as he completed the sprint double by seven metres in 21.70 (-0.5).

Additionally, M90 defending champion Dalbir Singh Deoul finished second in 53.48 (-0.6) as he was overtaken in the straight by Greece’s Konstan Chatziemmanouil (49.51).

Out in Caorle with relatively little support, the women found it much harder than the men but predictably Caroline Powell won her third sprint title.

In the field, John Moreland won M60 discus gold thanks to an opening round effort of 50.63m, which gave him a two-metre win over Finland’s Saulius Sviainis’s 48.59m.

There was an European W65 record in the javelin for Anne Kirstine Jensen’s 33.39m.

The medal success on Thursday means Britain have closed up on Germany and Italy in the medal table as they respectively won 14 and 9 titles compared to Britain’s 20.