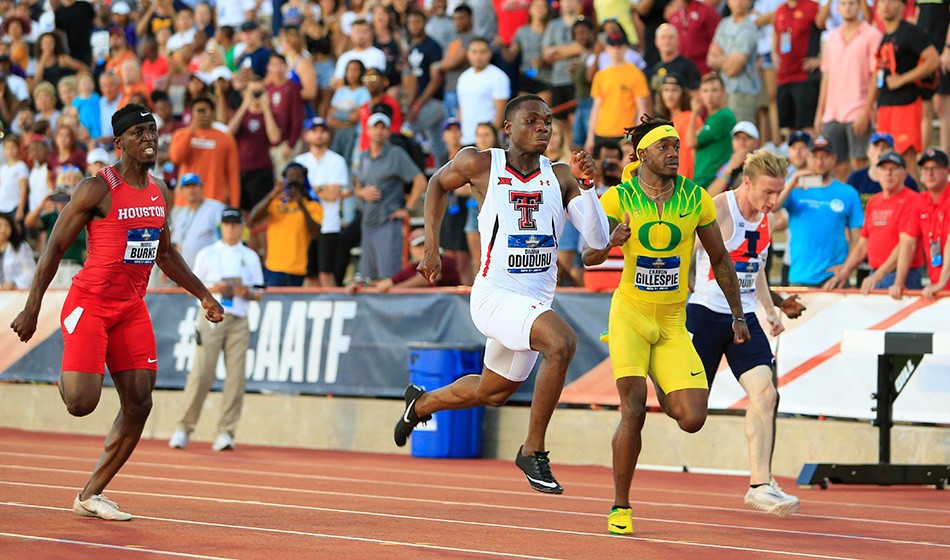 The top three all ran sub-10 seconds in the 100m as behind Nigeria’s Oduduru was American Cravon Gillespie with 9.93 and Japan’s Hakim Sani Brown with a national record 9.97.

Those positions were matched in the 200m final just 45 minutes later, with Gillespie second in 19.93 and Sani Brown third in 20.08.

USA’s Grant Holloway broke the collegiate record to win an exciting 110m hurdles and behind his 12.98, fast finishing Daniel Roberts ran 13.00 to match the previous record mark in second.

On the first day of the championships, GB’s Jacob Fincham-Dukes had finished fifth with 8.00m in the long jump won by JuVaughn Harrison with 8.20m, while Chris Nilsen cleared 5.95m to win the pole vault ahead of European champion Mondo Duplantis with 5.80m.

Harrison went on to complete a jumps double as he won the high jump with a PB clearance of 2.27m.

DOUBLING DOWN ON HISTORY!

Anderson Peters of Grenada broke his own championship record with 86.62m in the javelin, while France’s Yanis David leapt 6.84m to win the long jump ahead of Jasmyn Steels with a 6.71m PB.