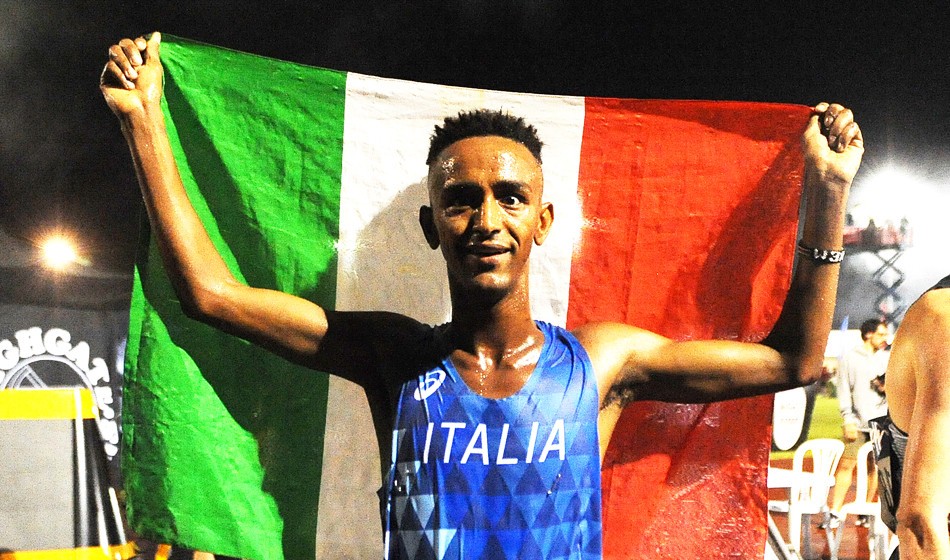 Young Italian ends Night of the 10,000m PBs on a high, while third-placed Briton surges to national title and helps his country to European Cup team silver

Yeman Crippa brought another tremendous Night of the 10,000m PBs event to a close as he shone in the soggy conditions to clinch victory in the men’s A race in London.

The talented 22-year-old Italian won bronze at the Parliament Hill track last year but this time he jumped to the front of the 25-lap queue, holding off the attentions of Germany’s Amanal Petros to hit the line first and help his nation to European Cup team victory.

European bronze medallist Crippa wore a broad smile in the immediate aftermath of his success, albeit his winning time of 27:49.79 was outside the IAAF World Championships qualifying standard of 27:40.

“I’m delighted,” said the newly-crowned British champion. “British Champs, third overall, sub 28 – it couldn’t have gone much better, really. I’ve blown up here before and I was wary of that, so I just stuck on the back of everyone and moved my way through.”

“It couldn’t have gone much better, really!” Chat with @bdconnor following his 27:57.60 PB for third and the British title at last night’s @NightOf10kPBs. @euancrumley pic.twitter.com/XD2wHbuNZw

After a day of near-perfect weather conditions for all the preceding races, the rain began to fall steadily just as the starting gun was fired on the final event of the meeting not long after Steph Twell’s memorable win in the women’s A race.

For much of the first half, the field was headed by the quartet of Belgium’s Soufiane Bouchikhi, Crippa, Turkey’s Aras Kaya and Norway’s former European marathon record holder Sondre Moen.

Happy to sit behind the pacemakers, and the trackside ‘WaveLight’ technology that was being used for the first time at the event, there was some catching up for the leaders to do by halfway if the tough world qualifying standard was going to be met.

It was former European cross country champion Kaya who moved to the front after 5000m, which was passed in 14:02.49.

Kaya began to fade, however, and it was Bouchikhi and Crippa who edged away as they picked up the pace with around 3000m left to go, while Connor began to make his presence felt.

The Briton was edged out of third spot by Petros but the pair began to haul in the weakening Bouchikhi and it looked clear, with two laps to go, that the race for top spot would be between the German and the Italian.

It was Crippa, who intends to return to London for the Muller Anniversary Games later this month, who won that contest, while Connor showed impressive strength to battle his way on to the podium.