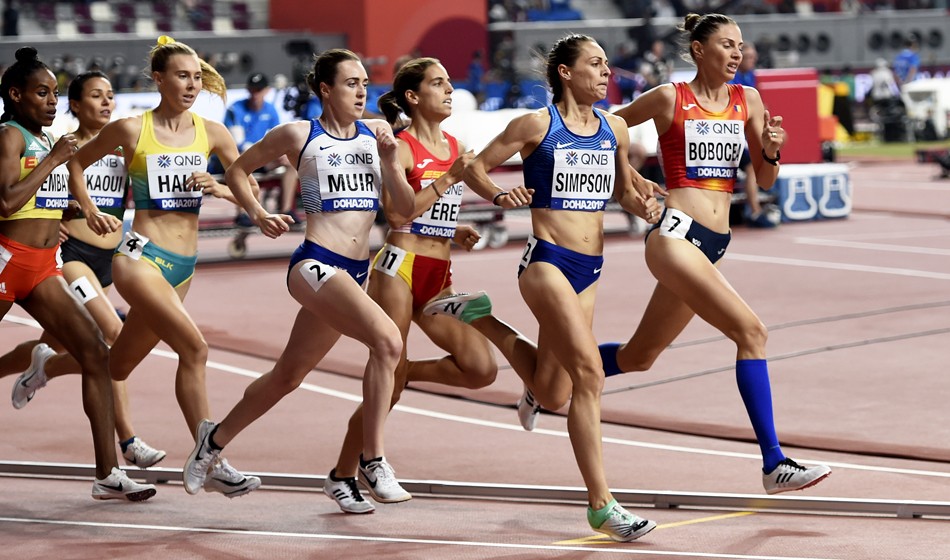 Laura Muir returned to racing for the first time since injuring her calf in London back in July and made sure of safe passage to the semi-final stage of the women’s 1500m at the IAAF World Championships.

The European champion indoors and out was narrowly third in the bunch finish to heat three in 4:07.37, behind Canadian training partner Gabriela Debues-Stafford (4:07.28) and 2017 world silver medallist Jenny Simpson (4:07.27).

“It was quite a good feeling,” said Muir. “I was quite nervous before that race. I’m usually not for the heats but I just thought it’s been so long and it felt good to be out there and I felt like myself and ‘ah’ I can still run, I can still race!’”

There had been plenty of attention surrounding 10,000m champion Sifan Hassan given her involvement with the now banned coach Alberto Salazar, however it did not affect her performance on the track as she ran 4:03.88 to qualify fastest overall from heat one ahead of defending champion Faith Kipyegon’s 4:03.93.

Britain’s Sarah McDonald clocked 4:04.42 in the same race to ensure her progress, though European U23 champion Jemma Reekie exited the competition following her 10th place in heat two with a time of 4:12.51.

McColgan and Weightman make sure of 5000m progress

In the women’s 5000m, the British pair of Eilish McColgan and Laura Weightman ran well to qualify for the final, the latter clocking her second-fastest time for the distance.

The Kenyan passed 4000m in 12:05.58, with a lead pack which included the Scot down to six as they chased five automatic places.

In the second heat, Jess Judd set the initial pace but it was a lot slower going than the opening contest, passing 1000m in 3:11.89.

The tempo barely increased as Fantu Worku led through 2000m in 6:16.13 while Lillian Rengeruk was at the front through 3000m in 9:24.40, 15 seconds down on heat one. It suggested that few of the field were going to go through as a fastest loser and a top five place might be necessary.

Both Judd and Weightman were in the pack but Konstanze Klosterhalfen upped the pace significantly through 4000m in 12:19.92 and it was down to eight as Judd dropped off.

European medallist Weightman remained well placed, however, and the group was six-strong at the bell, with the German still ahead on 13:59.32, having run 66 seconds for the penultimate lap.

It was a photo finish up front at the line as a 62-second last circuit gave victory for Tsehay Gemechu over Klosterhalfen (both 15:01.57) and Margaret Kipkemboi (15:01.58).

Rengeruk (15:02.03) and Weightman (15:02.24) took the final automatic place, exactly half a second ahead of Fantu Worku, who got through as a fastest loser but Danish steeplechase finalist Anna Moller missed out by a few seconds in seventh.

Weightman, the Commonwealth bronze medallist who had covered the last 3000m in 8:45 and final 1000m in 2:41, said: “It was a lot faster than I expected and I think I need to be a little bit more patient but overall I’m delighted to make that final and that was a big job today.”

Judd, who had beaten Weightman in the British Championships, found it much tougher and covered the last 1000m 38 seconds slower in finishing 11th in 15:51.48.

“I just had nothing, it was really odd,” she said. “I couldn’t go with it, my arms went dead, my legs went dead, everything went dead and I was just thinking that I’ve got to get there and finish and that was the most painful last five laps I have ever done, it was so hard.”

It has been a superb season for @jessjuddxx but she was left disappointed after missing out on the 5000m final in Doha and shared her thoughts with @Jason_AW #WorldAthleticsChamps pic.twitter.com/OR0p1qRgh8

There was a big surprise in the men’s 400m when world leader and Diamond League champion Michael Norman failed to qualify for the final. The American looked completely out of sorts and finished way back in seventh place in the last semi-final with a time of 45.94.

In his absence, the event is now wide open and Bahamian Steven Gardiner qualified fastest overall with 44.13, 2012 Olympic champion Kirani James second in 44.23, with Fred Kerley clocking 44.25 and Emmanuel Korir 43.37.

Britain’s Rabah Yousif did not progress despite clocking a season’s best of 45.15 which left him fifth in the third semi-final.

“I am frustrated,” he said. “A bit gutted. I finished this race and I felt like I could have done better.

“I felt as good as anyone in that race and I should have placed in the top three – so leaving with a season’s best is not what I was looking for, to be honest!