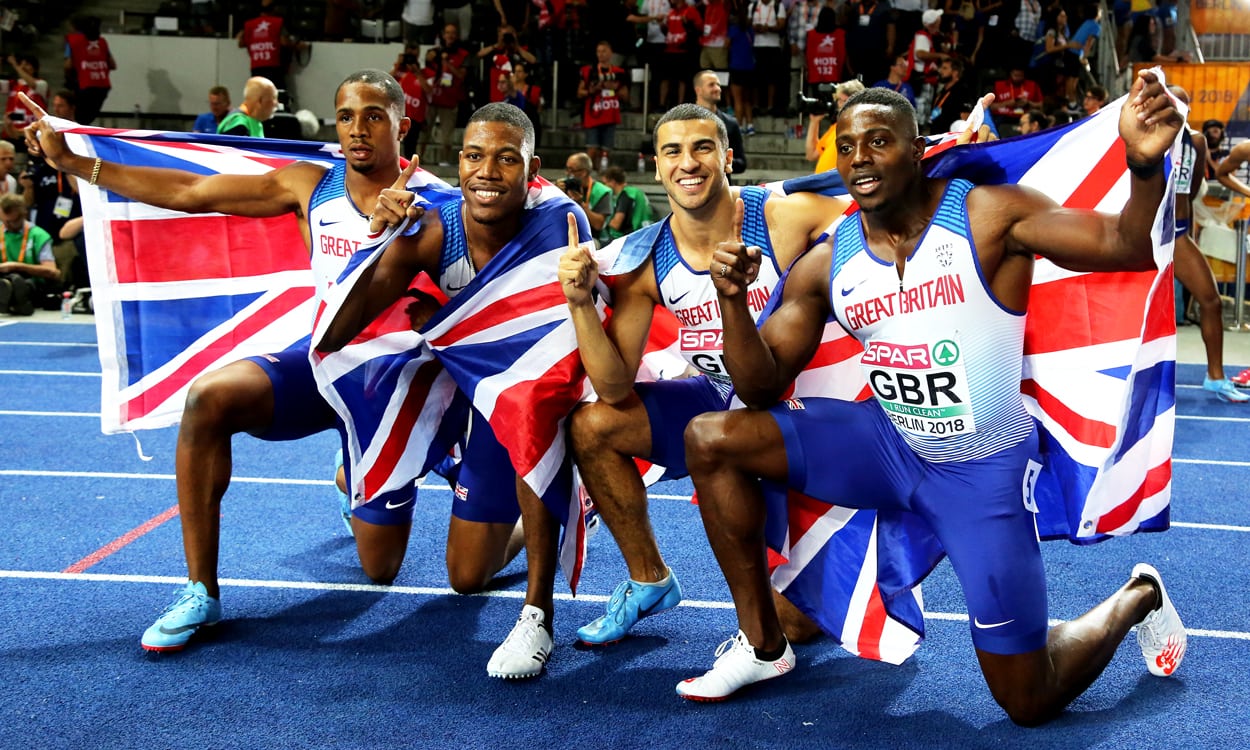 Great Britain took a late rejig to the starting line-up in their stride as they won the nation’s third consecutive European Championships men’s 4x100m relay gold, rounding off a remarkable closing night in Berlin.

The team of CJ Ujah, Zharnel Hughes, Adam Gemili and Nethaneel Mitchell-Blake had almost broken the championship record of 37.79 in the heats, clocking 37.84 to qualify fastest.

Mitchell-Blake, however, picked up a niggling injury when running his anchor leg and made way for Harry Aikines-Aryeetey in the final.

Ujah was out of the blocks fourth-fastest but, as is becoming the trademark of the team, a slick first handover sent Hughes on his way.

He got the job done and Britain crossed the line in 37.80 to carry on the substantial relay momentum built by last year’s world championships victory in London, a title they will look to successfully defend in Doha next year.

It matched the success of their team-mates in the women’s event a short while earlier.

Turkey took the silver in a national record of 37.98, and Holland also set a Dutch benchmark with 38.03.

For Aikines-Aryeetey, part of the winning team in Zurich four years ago, there was delight at winning a medal for the second time in the famous Berlin venue and words of consolation for Mitchell-Blake.

“Unfortunately Nethaneel couldn’t partake in the final, so we had to make some smart decisions taking care of his body,” he said following Britain’s fifth European men’s 4x100m relay gold in the last eight championships. “I’m the old dog, I got my first (senior) international medal here nine years ago.

“I’m experienced so it was time for me to step up and take the opportunity to see these guys home. We’ve got so much depth, so much experience. So many people backing us and behind us, it’s an honour to run with these guys and an honour to represent GB.”

For Hughes, it was the perfect end to a week which has brought him two golden reasons to be cheerful.

“I’m really happy to be with these guys today and I was really happy to get a gold medal with them,” he said. “They set up last year with the world championships by getting the gold, so tonight was an extraordinary experience for me to be a part of the relay and also to have made gold in the 100m earlier in the week.”

In the second qualifying heat, won by France, Germany crashed out spectacularly after Julian Reus and Lucas Jakubcyk came together at the final changeover, both needing medical attention.

» Results can be found here. See the August 16 issue of AW magazine for full coverage from Berlin